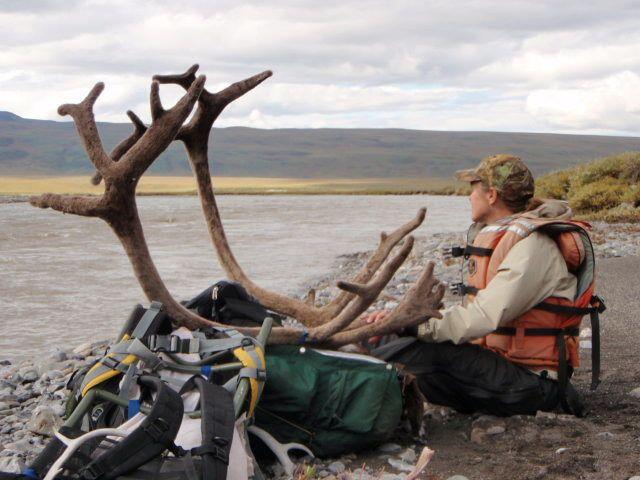 A Lesson in Humility

Featured Image: Holly Endersby on the banks of the Atigun during Arctic hunting trip.

The Arctic cuts a hunter down to size in a hurry.

This vast, unrelenting landscape cares nothing for people who come here. Hunters who have traveled the treeless arctic know what I mean. Without buildings or trees to judge distance, perspective is thrown off-kilter. Unlike the forested mountains and steep canyons of Idaho where I hunt elk and deer, the undulating land of the far north is deceptive in its simplicity. You can see for miles…you just can’t tell how many miles. And just when you think you’ve got the lay of the land, topping a low ridge reveals hidden glens that hold ponds with mated-for-life snow geese or a half dozen similarly bonded swans swimming peacefully. And despite their over-sized antlers and no trees to hide behind, this undulating land serves to shelter caribou you don’t see until you are right on top of them. This is when you start the journey toward diminishment: the hidden qualities of this seemingly bland landscape make your presence insignificant as you become dwarfed by the eternal immensity of the arctic plain.

We’ve come here with friends to hunt caribou, getting far into the wilderness by floating two glacier fed rivers roaring out of the Brooks Range. Driving ten hours north of Fairbanks on the haul road to Prudhoe Bay, our first night is spent bivouacked next to the highway in a small gravel parking area on the banks of the Atigun River. By mid-August, there’s still twenty hours of daylight so setting up tiny backpack tents at midnight seems perfectly normal.

The next morning, we inflate rafts, distribute gear, and lash everything down while the Atigun churns greyly by like a cold, triple shot latte. Encased in layers of techno-clothing, waders, and Gortex jacket I realize the life vest strapped tightly across my chest is no match for the Atigun: falling in, I decide, is simply not an option. Finally, with three catarafts and four inflatable kayaks loaded, our party launches and is quickly swept beneath the ever-present oil pipeline that snakes across this part of Alaska.

The Atigun sucks us along on a roller-coaster thrill ride trying hard to trap our heavily-laden rafts against car-sized boulders as we plunge and buck through deep holes and drenching waves.  Perched on the front metal brace of the largest cataraft, I have little confidence of survival should I get dumped into that roiling, rock infested water. Each time a wave washes over me, I cling to the metal frame like a barnacle to a rock hoping to withstand the onslaught. Within minutes, my hands have lost feeling so I keep checking to be sure my death grip on the frame hasn’t broken loose.  After five hours of extreme rafting, the process of diminishment had begun in earnest. I feel damn small in the face of the most technical river I have ever run, in a vast wilderness far from any help. And the worst is yet to come.

The Saginanauk, called The Sag by locals, gathers in the waters of the Atigun like a mother embracing a lost child. With other rivers collected on its way out of the Brooks Range, the confluence with the Atigun reveals a river twice the size and every bit as boney as the one we just navigated. I can practically feel myself shrinking just looking at that silt-laden monster, realizing there is no option but to join those waters in order to hunt caribou. By this time, we look like a group of castaways-wet from head to toe and tired. All bravado is wrung out of us: now we’ll be happy just to survive. Tales of hunting prowess have fallen overboard as we realize just what we’ve bitten off. I swear I can see the other hunters getting smaller and smaller…must be the self-inflating egos that have abandoned ship that makes everyone shrink.

When we finally reach our camp site—a wide gravel beach surrounded by seasonal water channels—I feel like dropping to my knees and kissing what is now holy ground and a sanctuary from the raging river. With rain continuing to fall, we put up tents beyond the high-water marks. That night, the milky, glacier-fed river rises three feet, the result of continued torrential rains in the Brooks Mountains just to the south of us. One look at the velocity and volume of the rain-swollen Sag means crossing that raging water to hunt is simply too daunting to consider at this point so I begin to scour this side of the river for caribou.

For two days, I slog through steady rain exploring the land behind camp, coming up empty despite hiking miles through water-soaked tundra where every step on a tussock requires a balancing act to not get dumped. But this morning, the rain is a mere drizzle and I reluctantly turn my eyes to the land across the river.  The idea of crossing the frothing grey expanse forms a knot of dread in my stomach but if I am to find a bull caribou, crossing seems the only option. Grabbing my binoculars, I can see a small herd of caribou on a flat-topped ridge across the churning water. It’s time to fish or cut bait.

Luckily, my husband agrees crossing the river is the only way to get to caribou, so we hastily don pfd’s, grab packs and rifles and take the smallest raft across the churning water. Safely on the other side we begin walking toward the ridge where caribou were last seen. Although we trudge along through squishy ground for an hour, the flat-topped ridge still seems miles in the distance. I feel like we’re in an optical illusion where no matter how far we walk, we never get where we are going. And each step shrinks me more.

Suddenly, over the lip of a rise, we see caribou and fall to our stomachs behind a hillock in hopes to stay hidden. Pinned down, we can’t get up to move, so we begin a slow, wet crawl on our stomachs. Inching to the top of the hillock I slowly raise my head and see a bull standing broadside to me and within decent range. I hug my rifle solidly into my shoulder and shoot from a prone position. The bull doesn’t drop immediately, but it’s a killing shot, so we rise and walk slowly behind until the caribou sinks to its knees and breaths its last breath. 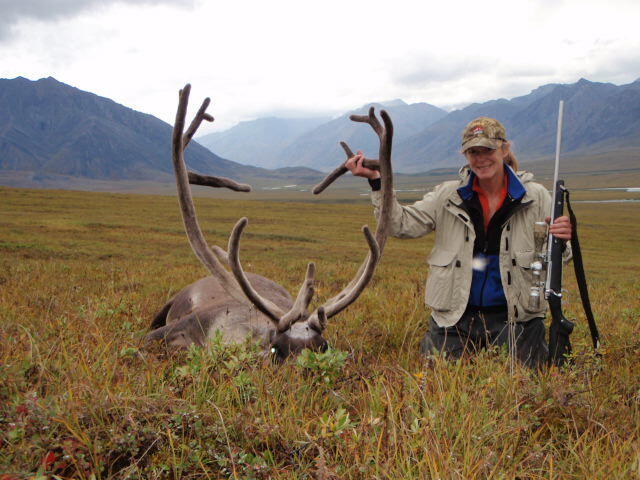 By the time we’ve field dressed the bull our bare arms are covered in bites from the hoards of insects that descend on us. We look like we have the measles and the bites are starting to itch like crazy. Now all we have to do is load meat and antlers and get it all back to our raft, which will take two trips. Heading out, we immediately get sucked into the mother-of-all bogs, where each step requires me to lunge forward and hope my hind foot will come free. Falling face-first is really something I don’t want to do with a heavy pack on, but each stride offers that breath-smothering possibility. Once again, this seemingly benign landscape has showed me who’s the stronger and my diminishment continues.

It takes two trips from the bull to the river and two trips across the river to get meat and antlers safely back in camp. By then, I am covered in blood, bites, and mud and ready to collapse: the arctic plain chewed me up and spit me out, done with me for now, it seems. I’ve had longer hunts, but never harder ones and certainly none where every day showed me a vast landscape that reduced me to a mere smudge on the earth.

Three days later, we scramble out of the Sag soaked to the bone. We’ve traveled 50 river miles and yet we’re only ten miles from where we camped the first night beside the haul road. We all started out on our bigger than life adventure cock sure of ourselves, but the Arctic wanted to teach us a lesson in humility as well as challenges and obstacles to overcome. Along the way I learned just how insignificant I am and how little the earth and her waters care about me as just one of millions of species on this planet.  It’s a lesson I won’t forget.  I was cut down to size by the eternal immensity of the Arctic, and that’s as it should be. 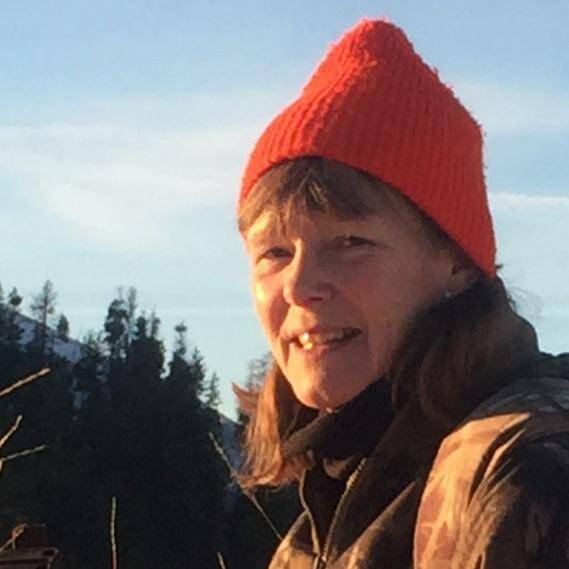 Holly Endersby has been a school principal at every level. She’s also been an outdoor writer for twenty-five years and was the first Conservation Director and later, Interim ED for Backcountry Hunters and Anglers and one of its original founding board members. She is a life member of BHA and Trout Unlimited and served a nine-year term as a trustee for the Idaho chapter of The Nature Conservancy. She is a member of the Outdoor Writers Association of America’s Jade of Chiefs, for “distinguished service to conservation” and a former OWAA board member. Her passion is the preservation of wild public land. Holly and her husband, Scott Stouder, are working to restore an Oregon coastal stream on private property to once again welcome salmon and steelhead. They live in Idaho five miles from the nearest paved road next to 88,000 acres of roadless national forest.