A Step Toward Ending Livestock Damage in Wilderness 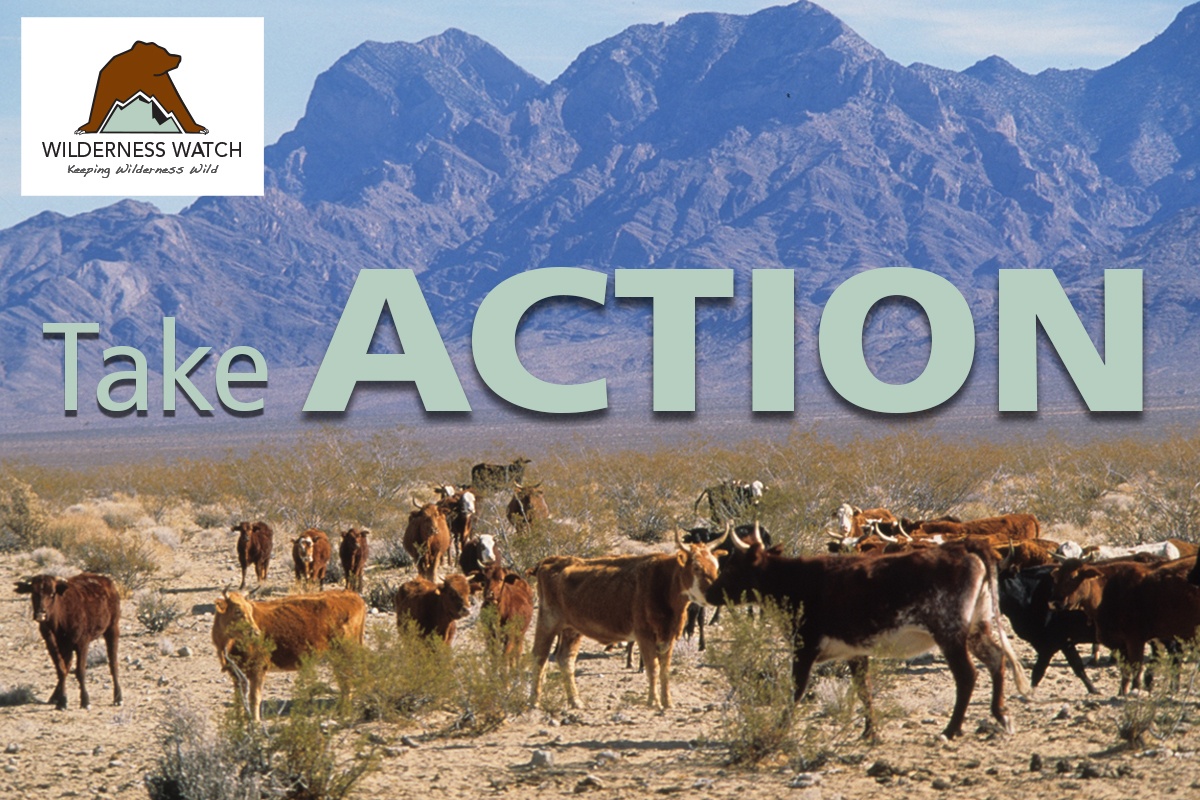 Add your name to Wilderness Watch’s call to action (details below) and urge your representative to support and co-sponsor the Voluntary Grazing Permit Retirement Act of 2022!

Under the VGPRA, if a rancher voluntarily waives their grazing permit back to the Forest Service or Bureau of Land Management, the permit would be permanently retired and couldn’t be reissued by the agency. This provides conservation interests an opportunity to end grazing on portions of public land by making a deal with the rancher—in essence paying the permit holder to waive their permit. The permit would then be permanently retired. Current regulations either prevent such retirement of public lands grazing permits, or make the process very difficult. Wilderness Watch has supported similar legislation in previous Congresses.

Cattle and sheep grazing is fundamentally at odds with the ideals of the Wilderness Act. Livestock grazing in wilderness creates conflict with native species, including bighorn sheep, salmon, grizzly bears, sage-grouse, amphibians, and rare plants. It also contributes to a “de-wilding” of the landscape for visitors, many of whom head to Wilderness areas to escape reminders of human influence. It diminishes an area’s wilderness character and the opportunity to experience the unique benefits that authentic Wilderness provides.

The Voluntary Grazing Permit Retirement Act of 2022 can go a long way in resolving the inherent conflict between grazing and Wildernesses preservation, and it would provide enormous benefits to Wilderness, wildlife, and watersheds. It deserves the support of all public officials and citizens who believe in protecting truly wild, natural ecosystems and the benefits they provide to people and wildlife.

Urge your representative to co-sponsor and support the Voluntary Grazing Permit Retirement Act of 2022 (HR 6935)!

The Rewilding Institute supports VGPRA but suggests a provision to reissue a permit for bison that are managed for conservation purposes.

We propose that the Voluntary Grazing Permit Retirement Act of 2022 (VGPRA), HR 6935, permanently retire permits to domestic livestock, but allow a provision to reissue a permit for bison that are managed for conservation purposes.  This fits with the Department of Interior (DOI) Bison Conservation Initiative (2008).  This initiative actively pursues and expands current NPS and FWS efforts to create bison metapopulations of bison herds. The DOI Bison Initiative seeks bison conservation projects that involve partnership efforts with states, tribes, BLM, Forest Service, USGS, and APHIS. The initiative hopes to include other Federal land managing agencies, such as the Forest Service and DOD. Cooperative efforts between federal land managers and tribal officials on behalf of Bison recovery should be encouraged by this legislation.

Research demonstrates that bison act as ecosystem engineers, altering the environment they inhabit.  In particular, research has shown that bison damage and eliminate piñon pine and juniper trees that are invading grasslands, as well as yucca plants and cholla cacti. As juniper increases on western grasslands, diversity and abundance of grasses decline, erosion increases, and moisture infiltration rates dwindles.  This has changed grasslands to savannas in millions of acres in the West.  Predictions for increased drought following climate change will exacerbate the problem.  When there is rainfall, junipers can out-compete grass for the surface moisture because they have roots that can extend laterally three times the height of the tree.  In addition, junipers have a taproot that can extend 150 feet below the surface.

Further, bison appear to “smooth out” cut banks, and head-cuts of arroyos, through the physical action of their hooves and horns and that this slows water flow and erosion.  Past research demonstrated that bison use grasslands differently than cattle, leading to a greater diversity of vegetation and vegetation height.  These changes go far past simple grazing and reflect behavioral differences between bison and cattle.  For example, bison move farther from water than cattle and spend less time at waterholes.  Being the native, bison are more efficient at utilizing dry forage.  Bison wallows capture water and can provide temporary habitat for amphibians.  The wallows also allow increased percolation of water through the vadose zone.

Like prairie dogs, bison are aggregate grazers whereas livestock are individual grazers.  Research in Yellowstone has shown that as an aggregate grazer, bison create a situation similar to grazing lawns of the Serengeti.  Whereas individual grazers allow plants to mature, and thus lose nutritional value and increase stem to leaf rations, bison grazing can keep grasses in early stages of growth, maximizing nutritional content, increasing leaf to stem ratios, and maintaining a high level of plant photosynthetic activity.