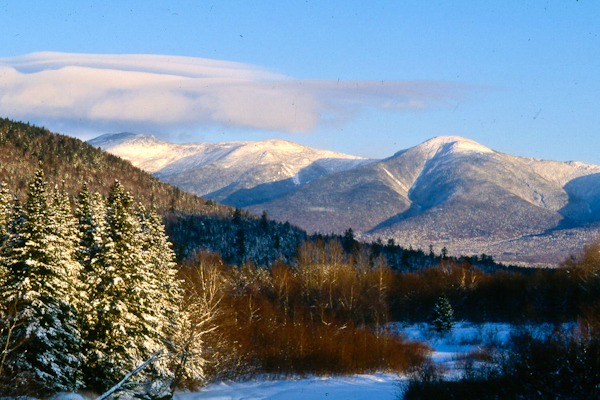 The White Mountain National Forest (WMNF) is the largest federally owned tract in the Northeast. The WMNF lies in New Hampshire and Maine and covers 800,000 acres, with 135,000 acres as designated wilderness.

A proposal to create an 800,000-acre White Mountain National Park and Preserve with a wilderness designation overlay for any roadless lands has growing backing in the region. RESTORE the North Woods and the New National Parks campaign is one of the park proposal supporters. 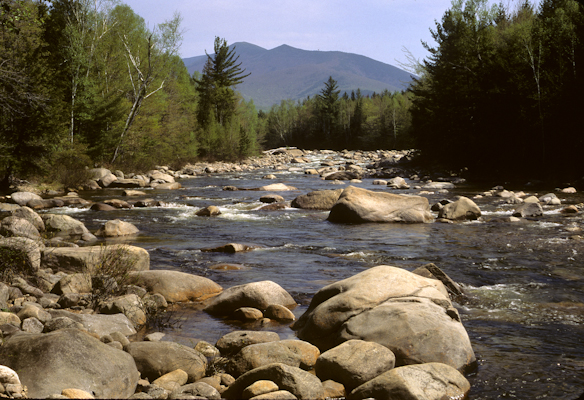 A park and preserve concept similar to the existing situation in many Alaskan National Parks is deemed likely to have the greatest public support. The park segment is closed to hunting and trapping. At the same time, the preserve area remains available for these activities, as well as snowmobiling and downhill skiing at existing resorts on Forest Service lands. 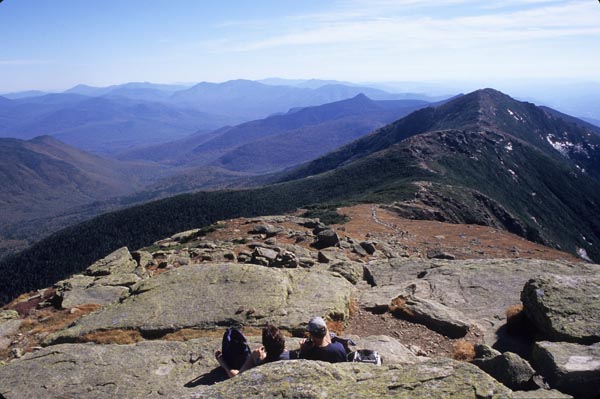 Creating a national park unit in the region will put the mountains under a single cohesive management unit that prioritizes maintaining ecological integrity and protecting natural systems. The NPS also has a better history of interpretation and managing human impacts. 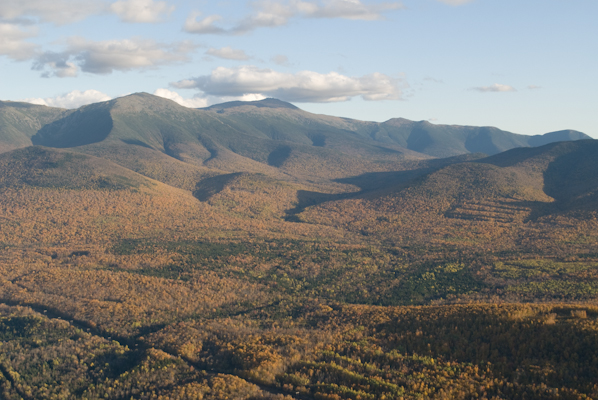 The WMNF continues to approve ongoing logging, clearcutting, and other destructive practices, including in roadless areas permitted under National Forest Management. The WMNF also approved a significant powerline (Northern Pass proposal was canceled) corridor through the forest’s roadless lands that would have brought hydropower from Quebec to the region. And a proposal to build a major resort on a private inholding on the summit of Mount Washington is getting no opposition from the agency. 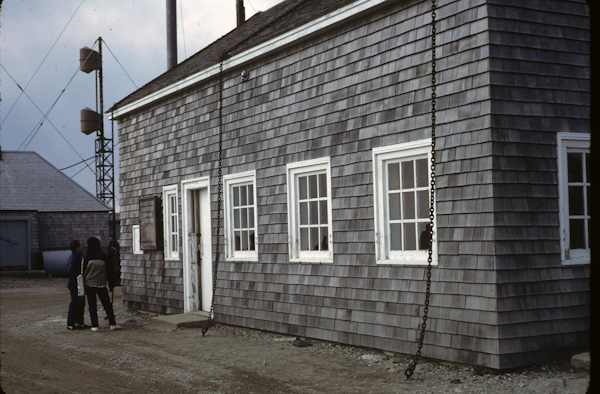 Chains hold on the roof of the Mount Washington observatory where winds of 234 mph were once recorded. (Photo: George Wuerthner)

The White Mountains are among the highest peaks in the eastern United States, topped by 6,288-foot Mountain Washington, which is reputed to have the worse weather of any station in the United States. High winds of 234 mph recorded in 1934 have been documented atop this summit. In addition to Mount Washington, there are 47 mountains taller than 4,000 feet within the boundaries of the proposed Park. 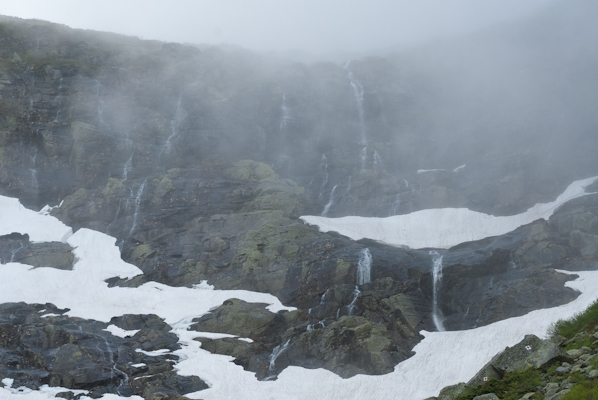 Tuckerman’s Ravine, one of numerous glaciated cirques in the White Mountains, looks like a basin in some Alaskan mountain range than somewhere in New England. (Photo: George Wuerthner)

These mountains were also heavily glaciated during the last Ice Age and had numerous U-shaped valleys, cirques, and other examples of a glaciated landscape. One of the most famous is Tuckerman’s Ravine which attracts skiers and snowboarders because of its challenging steep runs and deep snow. 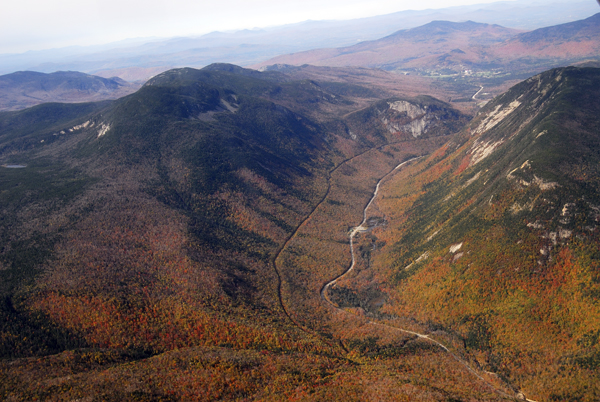 The White Mountains also possess some of the most extensive alpine tundra east of the Mississippi, with the many Arctic and Boreal species reaching their southern limits. A minimum of 110 alpine plants grow above tree lines in the White Mountains, seven are considered valid alpine species, and four are found nowhere else on Earth. 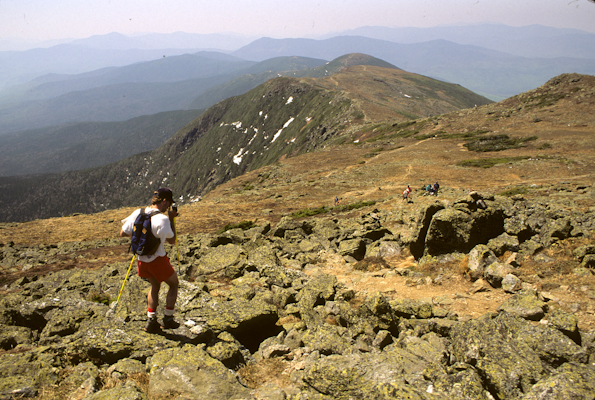 The White Mountains’ forests and alpine areas support 237 species of birds and are named one of the 500 Most Important Bird Areas in the United States by the American Bird Conservancy. 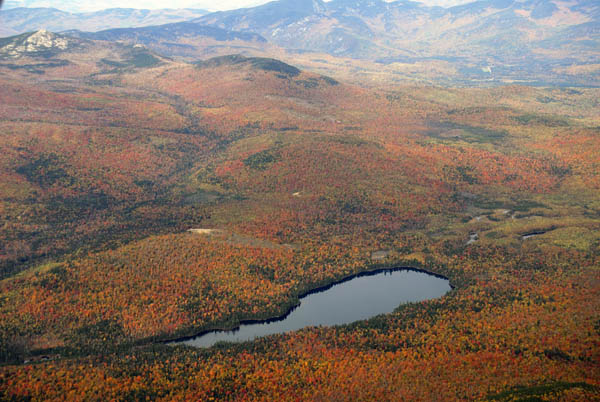 The area’s rivers and ponds are also a stronghold for native brook trout. The brook trout is the only native trout in the East and remains undisturbed in only 5% of its historical range. Some of the eastern U.S.’s highest quality brook trout habitats stay in the White Mountains. 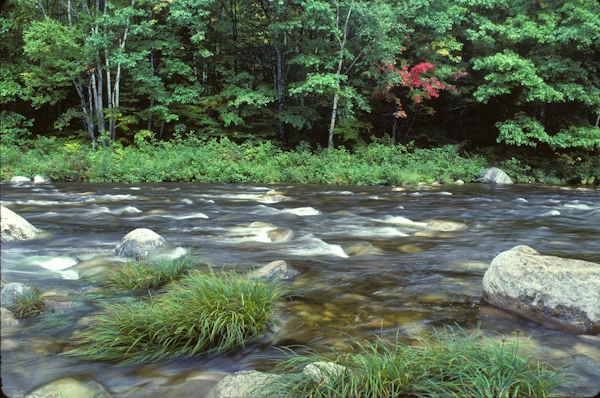 The White Mountain National Forest was created by the 1911 Weeks Act, one of the two first tracts of land to be acquired under the law. The Act directed Congress to purchase private timberlands to protect forests, watersheds, and wildlife. Unlike the western U.S., where the public domain allowed the establishment of national forests, parks, and wildlife refuges, nearly all of the public lands in the eastern United States were purchased, including such iconic landscapes as the Everglades, Acadia, and Great Smoky Mountains National Parks. 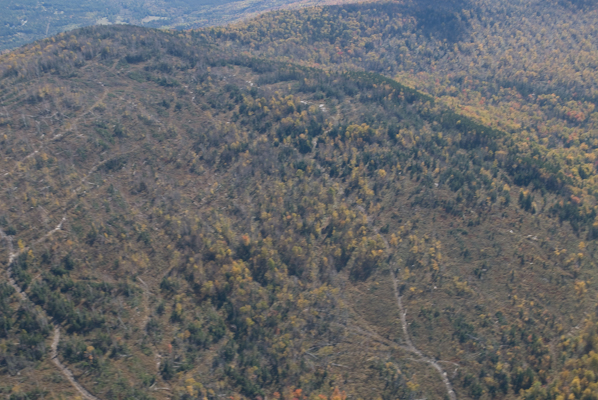 Logging that is promoted by the Forest Service would end under national park management. (Photo: George Wuerthner)

In many instances, the lands acquired for the White Mountain National Forests had previously been logged. But given a generous dose of time, many of these lands have passively reforested. With the land restoration, many wildlife species that were once rare or extirpated from the region, including moose, lynx, marten, black bear, and other species, have recovered from the turn of the century low points.

The White Mountains qualify for national park status. The area is within a day’s drive of 70 million people and receives 6 million visitors making it one of the most heavily used public land units in the Northeast. National parks are better prepared to manage human management than most national forest units. 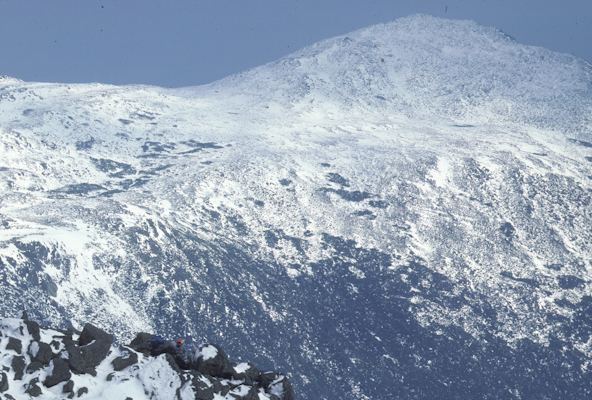 Mount Adams in the Presidential Range is one of several peaks over 5,000 feet in the White Mountains. (Photo: George Wuerthner)

The White Mountains would fill a gap in the bioregional representation of our park system by protecting the region’s largest northern hardwood highlands ecosystem under federal management. It would only be the second entire national park in the Northeast (there are other NPS units like national seashore, historic sites, and Appalachian Trail). 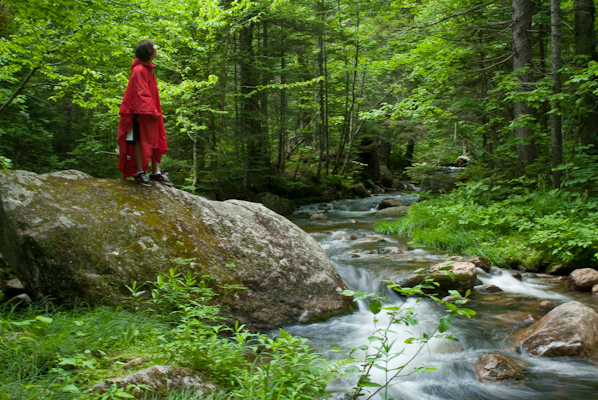 Since most of the land within the White Mountains region is already under federal ownership, the transfer of the area to National Park Service jurisdiction would only require an Act of Congress to complete. More than 20 existing National Parks and Preserves were created by incorporating National Forest System lands, including Glacier (MT), Grand Teton (WY), Olympic (WA), Bryce Canyon (UT), Glacier Bay (AK), Great Basin (NV), Kings Canyon (CA), North Cascades (WA), and Voyageurs (MN).

WHY A NATIONAL PARK?

The National Forests are under the administration of the Department of Agriculture. They are much more oriented toward industrial and resource development, logging, oil and gas leasing, mining, and livestock grazing. 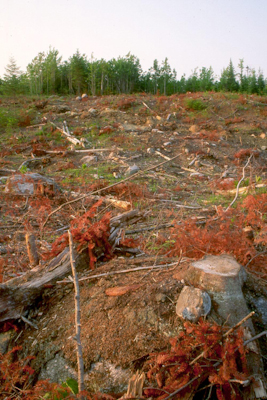 Due to the abundance of private timberlands in the Northeast, the national forests provide a small amount of lumber. They would better serve the public as carbon reserves under National Park Management. (Photo: George Wuerthner)

The WMNF only provides about 1% of the regional timber supplies since there are extensive private timberlands in the area, which is another justification for a national park. There are plenty of privately owned acres for logging but few acres under any protection.

The National Park Service is under the Department of Interior and parks are managed primarily for wildlife protection, education, and recreation. 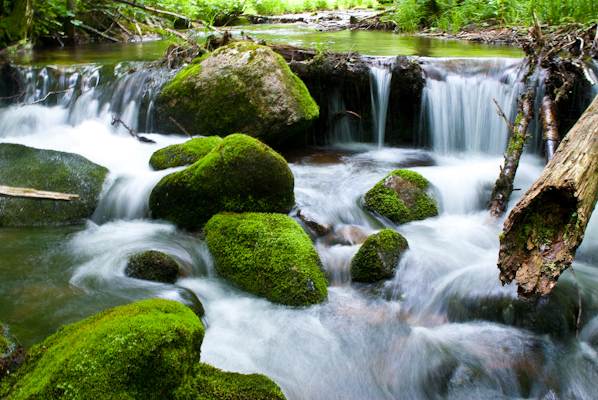 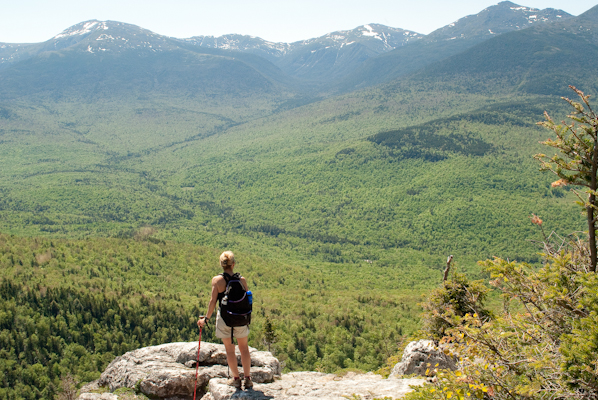 However, 27 inventoried roadless lands on the WMNF could be designated as wilderness as part of any National Park legislation. Some of the largest roadless areas include Kilkenny (37,096 acres), Pemigewasset (65,781 acres), Sandwich Range (21,400 acres), and Wild River (71,387 acres), among others. 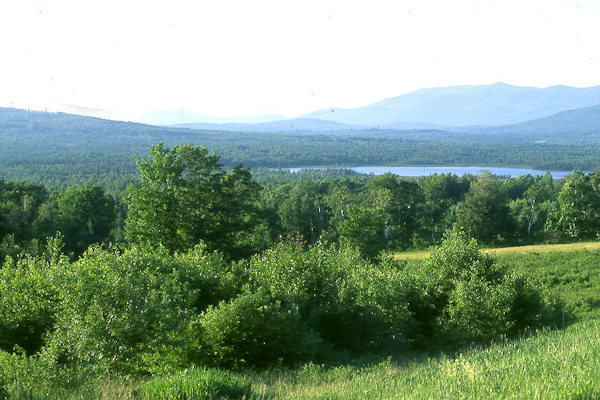 The Kilkenny area, Northern White Mountains, is one of many roadless areas that could be designated wilderness under NPS legislation. (Photo: George Wuerthner)

In the era of climate change, maintaining forests and permitting them to achieve “old growth” status would store significant amounts of carbon. Because trees are roughly 50% carbon, increases in standing forests are directly correlated with bound or sequestered carbon increases. 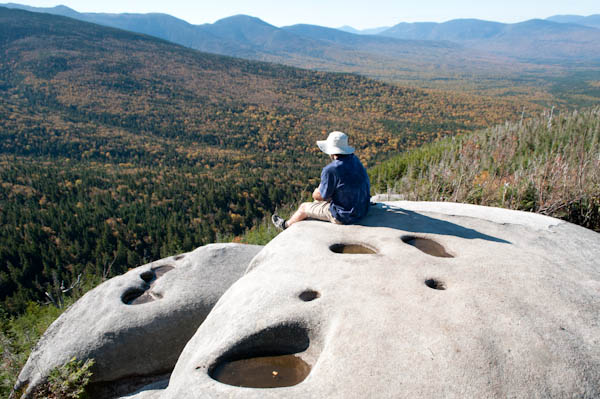 The White Mountains are visited by six million people annually. Most use is concentrated on roads. Hiker on Caps Trail on Mount Jefferson. Extensive areas of wildlands still remain and need protection. (Photo: George Wuerthner)

Because hunting and trapping would be prohibited within a White Mountain National Park, it would provide the best location for restoring native predators like the wolf, cougar, and wolverine.

The WMNF is sympathetic to intensive development like powerlines, wind generation, ski resort development, logging, and other commercial uses at the expense of the region’s wildlands. 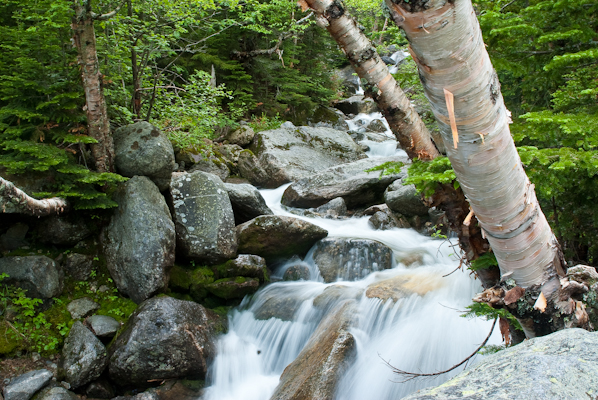 The National Park Service has a different charter to protect and preserve ecological integrity. The NPS budget is skewed towards wildlife and habitat protection, historic preservation, public education, and appropriate recreation.

There is likely to be some opposition initially to any park proposal, typically from commercial interests like logging, which would be discontinued under a national park rubric. However, over time most citizens come to favor federal park status. An example is the Katahdin Woods and Water National Monument in Maine which is under NPS management. The monument’s establishment was a much heavier lift because there were no sizeable federal land holdings as in the WMNF. Nevertheless, once the park unit was created, public support for the monument grew.

The time is right to transfer the WMNF to the National Park Service.

Hydroelectric power is GREEN energy- the dams have already been built in Canada and they’re not going away. Yes, some power lines would be strung through the mountains. But NO! We can’t have that. I’ve climbed all 48 of the 4000 footers and it wouldn’t bother me. The White Mountains region is fine as constituted we don’t need more central government control.
Just my $.02