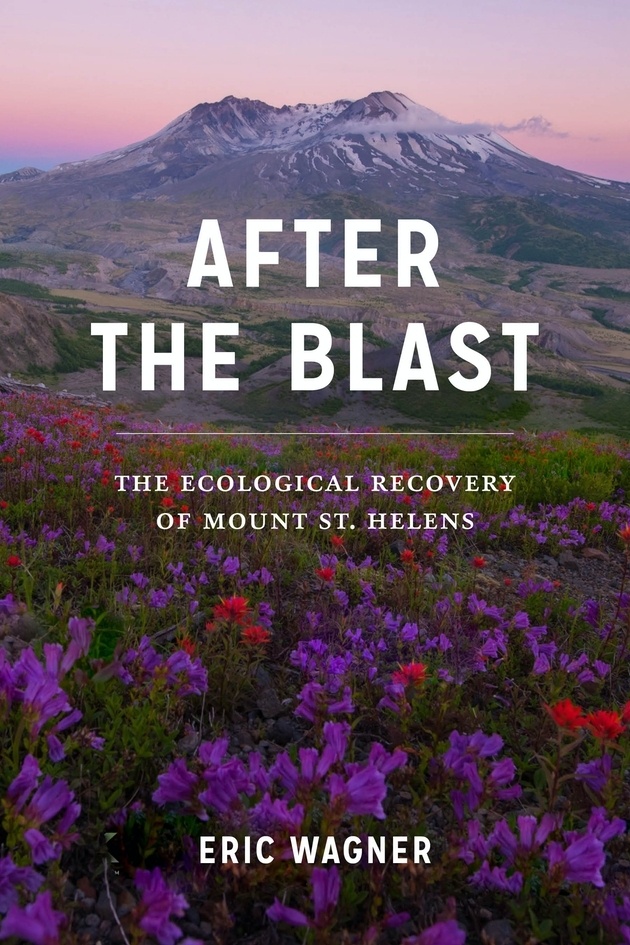 After the Blast: The Ecological Recovery of Mount St. Helens

At 8:32 on the morning of May 18, 1980, I sat in a snowy clearing deep in northern Washington’s Pasayten Wilderness preparing students for their day’s work when out of a cloudless sky came a percussive boom, like thunder—actually several concussions that we could feel. Our camp was above 7,000 feet and we had a long view over the forested landscape to the south, and this was not a thunderstorm. Could it be an eruption of Mount St. Helens, we asked, since we knew the mountain had been active since March. No way, we thought, for we were nearly 200 miles north of the mountain, near the Canadian border. But it was Mount St. Helens, and as the day wore on ash filtered down, not much, but enough to feel some grit in our teeth.

The reason we could feel this amazing event was because the lateral blast went north in our direction, and we were sufficiently high up to physically feel it. Eric Wagner writes that after the blast, the mountain was 1,314 feet shorter, replacing the symmetrical summit of America’s Mount Fuji with a crater a mile wide and two thousand feet deep. A couple of weeks later, a team of scientists flew over the gray landscape north of the mountain, certain that nothing could have survived. But for them, as Wagner observes, what they saw “was almost perversely exciting. In overwriting the landscape, Mount St. Helens had presented ecologists with what was a huge natural experiment. It was as if the volcano itself had posed a question: What happens when every single living thing for hundreds of square miles, big and small, plant and animal, is burned away or buried, and nothing is left but rock and ash?” The ecologists were determined to take advantage of this remarkable opportunity, and in After the Blast Eric Wagner tells the story of how they did so.

Eric Wagner is a science writer with a PhD in biology and a background ideally suited to tell the complex story of how the landscape devastated by the volcanic blast has “recovered” over the past forty years. On that first flight into the blast zone, when ecologist Jerry Franklin jumped out the helicopter into the ash, he glanced down, “but instead of the gray he expected, he saw a green shoot poking up next to him.” He knelt and looked closely. “I’ll be damned, Franklin thought. It was Chamaenerion angustifolium, a plant much better known by its common name, fireweed.”

So began the adventure of studying and documenting the ecological process of recovery of a landscape massively changed by a natural disturbance. Many scientists would jockey to be part of this grand inquiry into hypotheses about how life would regenerate in a place such as this.

The fireweed that Franklin saw not only changed the ways that he and other ecologists approached the eruption and the landscape it created, but also led to new ways of thinking about how life responds to seemingly total devastation. Some of the ideas grappled with such things as disturbance, resilience, succession—topics in the gauzier realm of ecological theory. Others had more explicitly practical applications, for even as it had destroyed the land around it, Mount St. Helens would help users in new, wiser ways of managing forests and streams.

Several scientists are central to the story of how the ecological regeneration was studied and monitored for decades. Ecologists Jerry Franklin, Charlie Crisafulli, Jim MacHahon, Jim Sedell, Virginia Dale, geologist Fred Swanson, and many other scientists are players in Wagner’s telling of the research story. Wagner organizes the book around these scientific players, describing their backgrounds and how they became involved in Mount St. Helens research, explaining how a couple generations of scientists have been taking advantage of the remarkable research opportunities provided by the mountain.

A central figure in this story, for instance, is Charlie Crisafulli who has dedicated his career to studying this story of ecological regeneration. He started as an undergraduate when his mentor, Utah State University biology professor Jim MacMahon, included him in a team that came to the mountain in 1980 to study how small mammals responded to a volcanic eruption.

Beginning in 1980, Crisafulli and MacMahon watched as surviving pocket gophers helped usher a little green into the blast area, their brown mounds and the areas around them sprouting new vegetation. The work captured Crisafulli who, when Wagner visited his “Ecology Camp” near the mountain, had been working on the mountain for thirty-seven years.

“This is my thirty-seventh year, and if I spend about eighty nights a year here, well, you do the math,” he says. It is hard to think of a single project here that Crisafulli is not somehow involved with, has not contributed to in some way, or at least has not had strong opinions about.

MacMahon and Crisafulli documented how the pocket gopher contributed to regeneration, but Crisafulli says that for the first decade the gophers were good for plant succession, but then their effect changed, and they began to suppress plant growth.

He guesses there might be hundreds of even thousands of miles of tunnels in the blast areas, and this tunneling itself is a kind of chronic disturbance, keeping some kinds of plants from becoming established. By repeatedly turning over the earth, the gophers are slowing succession to suit their own ends.

“So the gopher goes from being a survivor-hero of the Blowdown Zone to kind of a villain,” I say.

“Well, I wouldn’t go that far,” Crisafulli says. “It’s just an animal doing what an animal does. Which is certainly reasonable. But the point is, these things are always a lot more complicated than they’re made out to be.”

Complicated indeed, and Wagner ably describes the complications and surprises the Mount St. Helens researched revealed. Crisafulli, a senior ecologist with the U.S. Forest Service, is approaching retirement, but can he “tear himself away from this place? There is too much still to learn, too much happening, too many old questions that still need answering, too many new questions that the answers to the old ones will provide.”

The central story of After the Blast is such scientific work by Crisafulli and many others, but there is more. The scientists hoped to study the Blast Zone over time without any human disturbance that would impact the uniqueness of their research opportunity, but this turned out to be impossible. Spirit Lake, a beautiful and popular spot before the eruption, had been radically changed, raised almost two hundred feet by the debris avalanche that roared into it, displacing all the water which then washed thousands of logs back into the lake creating a huge log mat. Doubled in size and continuing to rise behind a massive debris dam, the lake posed a flooding threat to the Toutle and Cowlitz Rivers and the Army Corps of Engineers stepped in. Wagner writes, “In this new landscape, the rising of Spirit Lake spurred the oldest of human urges: to stand athwart an inexorable natural force and tell it to stop.” And that’s what they did, first pumping water out of the rising lake, then boring a tunnel 8,500 feet long and 11 feet in diameter to maintain the lake at its pre-eruption level. Despite this, aquatic ecologist Doug Larson and colleagues studied the lake, practicing what they called “adventure science” since doing so was often risky and exciting. Wagner clearly enjoys describing their adventures as they struggled with wayward logs, toxic water and dust, and other hazards. They learned a lot.

Perhaps the most egregious intrusion on the research opportunity involved erosion control as sediment was transported down the North Fork of the Toutle River, raising the riverbed and increasing flood risk. The U.S. Soil Conservation Service was called in, “the agency’s mandates and methodologies better suited for agricultural settings than scenes of volcanic ruin.” Wagner describes the decision by the SCS to artificially seed from helicopters two hundred square miles of the blast zone with grasses and legumes. Ecologist Virginia Dale was studying the plant communities returning to the area and objected to the proposal to seed with whatever the agency “had on hand” rather than with native species like red alder. She and other scientists ultimately persuaded the agency to reduce the area on which it would dump fertilizer and seeds to thirty-two square miles. That was some consolation, though even this smaller area encroached upon research.

Another part of the story is the creation of Mount St. Helens National Monument. After the SCS experience, Dale and other scientists as well as a coalition of conservation groups decided that protection of the blast area was needed. “There was, they argued, nothing at all like this place anywhere else in the world. The volcanic landscape was too unique, too valuable as a scientific laboratory, to turn over to the logging companies to salvage willy-nilly, or to federal agencies to dump dandelions on. To do so was tantamount to pretending that nothing had happened.” Proposals for a national monument were solicited by the federal government, and several submitted. On August 26, 1982, after negotiations about what should be in the monument, President Ronal Reagan signed the Mount St. Helens National Volcanic Monument Act. It would be administered by the Forest Service.

The story of how nature reestablished itself after the blast is far from over. Wagner does not summarize what has been learned in the forty years since the blast—there is too much, and each chapter of the story reveals some of the insights that have been gained. In the epilogue we find the indefatigable Crisafulli in Chile sharing what he has learned with Chilean ecologists and learning more on the slopes of the Chilean volcano Calbuco. The ecological work goes on, and what is learned will continue to grow and inform how nature responds to volcanic eruptions and “lesser” disturbances like consequences of climate change. Wagner is an excellent science writer, and in this book documents in a most accessible way the story of “the human endeavor of science encountering a staggering unknown.” In this time of the denigration of science and scientists, After the Blast testifies to the nature and importance of scientific inquiry into forces and processes of nature that are both exciting and essential.