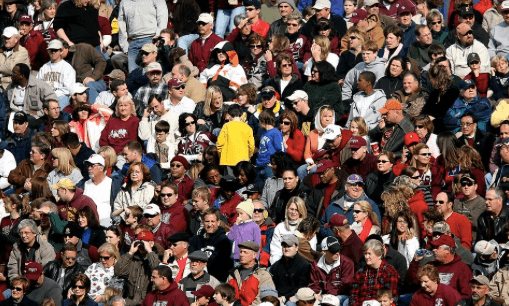 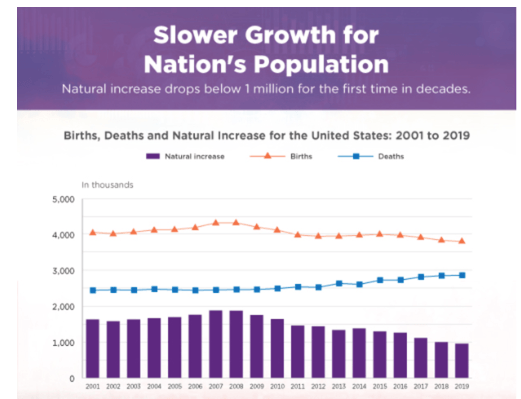 The US Census Bureau recently reported that the Natural Increase (NI) of our country’s population had dropped below 1 million for the first time in decades. That is both good and bad news.

There are many demographic measures. I like the Total Fertility Rate, the number of children a woman has given birth to during her lifetime. It is easy to remember that a country with a TFR of 2.1 will reach a steady population (zero population growth) after 4 or 5 generations, if it isn’t already there. Any TFR greater than 2.1 suggests a country is growing, while less than 2.1 indicates that growth has slowed and eventually the population may even decline. A shortcoming of TFR is that death and migration rates also affect growth, but are ignored by this measure.

The TFR of our country decreased appreciably in the past decade from 2.1 in 2009 to just 1.7 now. This change might seem small, but over generations it becomes very significant. We are on track to have a gradually shrinking population unless more people immigrate than leave the country. However, it will take decades before that happens, and immigration will probably prevent this from occurring.

Although it is good the Natural Increase is decreasing, there are several reasons for concern. A graph from the US Census Bureau shows one: the number of deaths has increased over the past decade. Some of this rise in mortality is because there are more older people. Oldsters are more likely to die than youngsters, of course. The sad fact, however, is that the death rate among younger folks is also increasing due to drug overdoses, guns and suicides. We here in La Plata County have seen too many die from these causes. Another cause of the rise in mortality is because people are less healthy. Obesity, fast foods and lack of exercise are also taking their toll.

Although the TFR seems to have decreased recently, this trend may not last. Women are waiting until they are older to start their families. Whereas women used to have their first baby in their late teens or early twenties, now it is common for first-time mothers to be in their late thirties or even forties. The oldest woman whom I assisted in birth was 52!

How is this possible? Mrs. Smith (I don’t remember her real name) had been a teacher, then earned her doctorate in education and stayed on at the university as a professor. After retirement she fell in love, married and took advantage of advanced reproductive technology to conceive. All this despite having gone through the menopause! She told me that she didn’t have to worry about genetic testing because the egg had come from a young donor.

I don’t know how I feel about sophisticated assisted reproduction. I admit that it is wonderful to see a happy, healthy baby resulting from IVF in the arms of her delighted mother. However, there are thousands of children right here in the USA who need loving, adoptive homes.

An increase in deaths is not my only concern about the dropping NI. With fewer babies being born our population will age—the average age of people in the USA will increase. Although there are some advantages to an aging populace, the percentage of people in the workforce is likely to diminish. Sometimes I wonder if there will be anyone to take care of me when I’m old and frail.

Another reason to be concerned about our low TFR and the aging population is that our economic system, capitalism, is based on growth. No biological system (including humans) can grow forever. How will the end of growth play out? We have enjoyed a wonderful era of prosperity that was made possible, in part, by our growing population. Unfortunately, that expansion has been at tremendous cost which we often ignore—climate chaos, water pollution and extinction of species, among other disasters.

Even though there will be some difficulties as our growth slows, a smaller population in the USA will be better.  © Richard Grossman MD, 2020  richard@population-matters.org