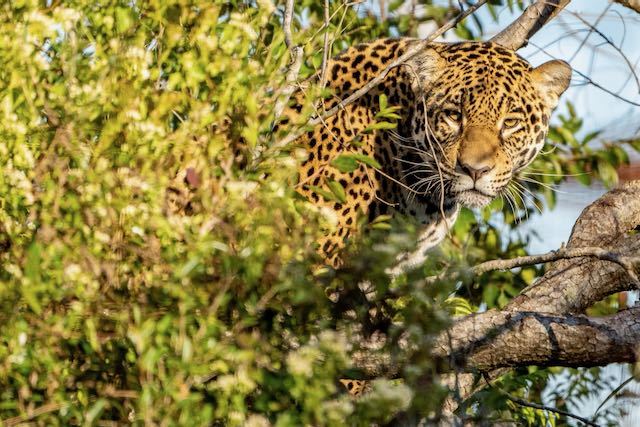 After jaguars went locally extinct in Corrientes Province 70 years ago, one of the first cubs born in Rewilding Argentina’s innovative reproduction program has been set free. In 2021, seven jaguars have been released in the massive Iberá Park to return the top predator to the wetlands.

On September 24th, the seventh jaguar from the Jaguar Reintroduction Center of Iberá Park in Northeastern Argentina, was set free into a protected area of 1.7 million acres. Arami was one of the first two cubs born in this one-of-a-kind breeding program in June 2018. Initiated by Tompkins Conservation, and now led by the nonprofit’s strategic partner Fundación Rewilding Argentina in conjunction with the province of Corrientes and the National Parks Administration, the project seeks to rewild jaguars in the region where the species went locally extinct over 70 years ago.

Named by local schoolchildren, Arami means “Little Sky” in Guaraní, an indigenous language of the region. Images of Arami and her sibling Mbarete captivated audiences worldwide, as remote sensor cameras captured their first explorations, swims, and hunts. At three years and three months, she has reached full adulthood and become skilled at hunting capybara and wild peccary. Like the two adult females released before her this year, Mariua and Juruna, Arami wears a GPS collar that monitors her daily movements.

The people of Corrientes are celebrating the return of this emblematic species. The presence of the jaguar as a top predator is of vital importance to achieving a healthy and complete environment with all species present in sufficient numbers to fulfill their ecological role. With the return of the America’s largest feline, the cultural significance of this species, admired for its strength and beauty, is also recovered. The return of the jaguar also positions the Iberá wetlands as a top international wildlife watching destination.

Rewilding Argentina is working to bring back a number of species that play a crucial role in the wetland ecosystem, among them pampas deer, giant anteater, red-and-green macaw, giant otter, collared peccary, and the bare-faced currasow. In parallel, the nonprofit has helped develop a local economy of nature-based tourism, with 10 gateways to Iberá Park that offer visitor services and wildlife watching opportunities.

A driving force to curb the worldwide climate emergency and the biodiversity crisis, Tompkins Conservation has spent nearly three decades working to rewild a healthy planet with big, wild, and connected landscapes where human communities, animals, and plants can thrive. Collaborating with public and private partners, the organization has driven the creation and expansion of 15 national parks, protecting 14.7 million acres.

Background on the Jaguar Program

A natural monument in Argentina, the jaguar went extinct in the province of Corrientes over 70 years ago. Today, there are an estimated 250 specimens throughout Argentina, where the species is critically endangered.

In 2012, the reintroduction program began with the construction of the Jaguar Reintroduction Center (JRC). The large 1.5-hectare pens are managed remotely, without the need to observe the animals directly. In 2018 the first two cubs were born at the JRC: Arami and Mbarete. Both cubs have spent their lives without human contact.

In 2019, institutions in Brazil donated three rehabilitating jaguars of wild origin to the program. Orphaned by poachers, jaguars Mariua and Juruna were raised in the reintroduction center, where they bred with another jaguar of wild origin. Both females had two cubs, and all were released earlier in 2021. Jatobazinho, father of the offspring, remains in the JRC without contact with humans, awaiting release.

After she grew to full size, Arami was transferred to a 30-hectare enclosure where she could perfect her hunting skills under supervision, in a varied environment of forest, grassland, and wetlands. Her full release comes with the opening of the doors of this enclosure into the 1.7-million-acre wetlands of Ibera.