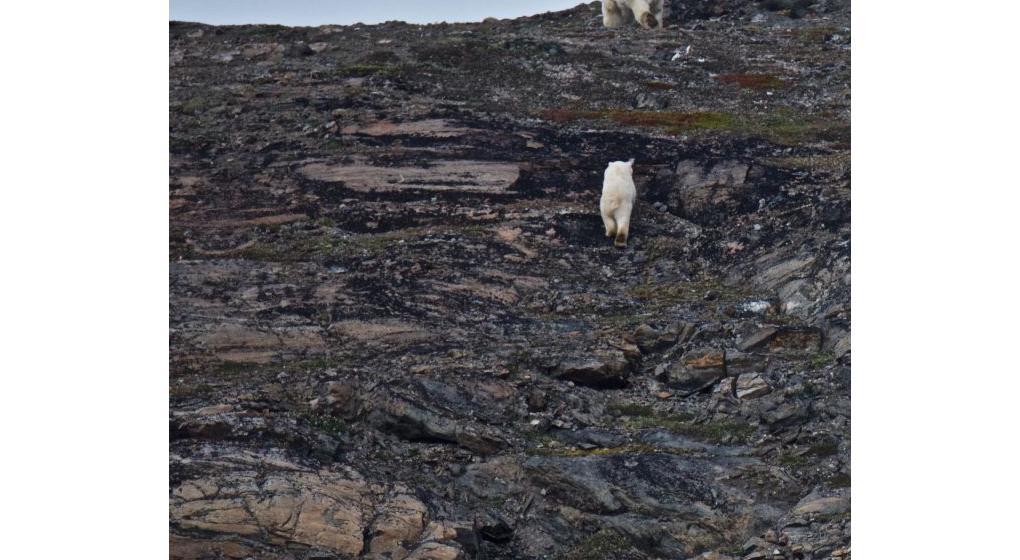 Well, I guess it’s time to explain my withdrawal of late and why The Rewilding Institute seems to have been moved to the back burner.  In a nutshell, I’ve had two kinds of breakdowns this year—technological and spine.  Coming together, they’ve been a perfect storm.

(As you’ll see soon, though, we are actually redoubling the work of The Rewilding Institute, despite recent technological and health challenges.)

On the tech side, my MacBook broke down.  It was old, near the end of its planned obsolescence.  And then, if you want to believe me, a careless calico cat with a flick of her tail spilled a glass of cabernet on it.  However, if you want believe Yampa, the calico cat, an oafish ground ape, known amongst the cats as Bumblefuss (me), spilled the wine.

Whatever, as the cats say, the laptop was about to go down anyway.

In trying to set up my new iMac and little MacBook, all coordinated with my ancient iPhone and all linked up with something called iCloud, I not only blew out some brain circuits but I botched it all. Passwords got scrambled, machines were not working together, and goodness knows what else.

Then, to boil it down, my final melting from the world of electronic mail came in June when I clicked to open Mail.  There were no new messages, so I clicked on the little hieroglyphic to get mail.  Instead I got a boxed decree that I couldn’t connect to my email provider (Comcast) and needed a new password or something.  I messed around to no avail and then called Comcast for help—or was it Comcast? I then followed some well-dressed white rabbit into a hole where I got codes and such on my iPhone that would then lead me to a new password that would get me back online.  Nope.  Sorry.  No go.  Instead I had been cast adrift by the top-hatted rabbit in a computer never-never land.

So.  Okay, it was way past time to get a much younger person to come in and straighten out my mess.  Which I would do after a long-planned trip with a few old friends to the far north of Quebec, the autonomous Inuit region of Nunavik east of Hudson Bay.  Our friend and Canadian outfitter Tundra Tom (Great Canadian Wildlife Adventures) could get us out in a small boat in Ungava Bay to see and photograph polar bears.  Polar bears!  Musk oxen!  Maybe Ivory Gulls!

I had to do it.  Computers be damned. 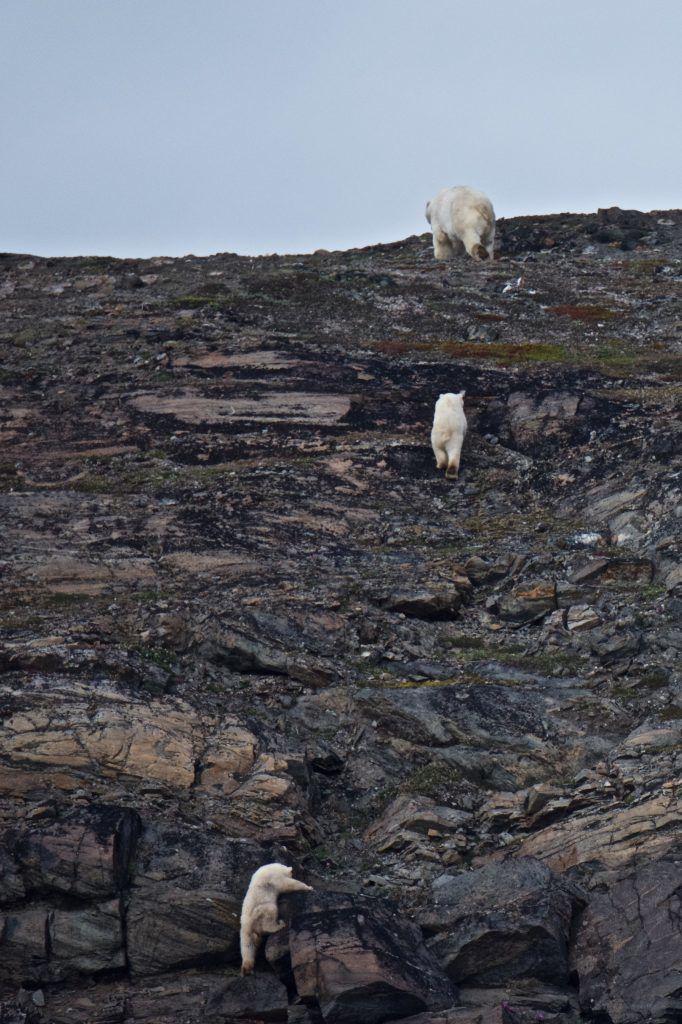 As many of you know, since the beginning of the new century, I’ve been a bit of a gimp.  This whack to my high fitness was brought about by my gee-whiz!/eye-popping tobogganing stunt down the lovely—but damn hard and slippery—stairs in the Renihue home of Doug and Kris Tompkins.  Since then I haven’t been able to run, hike far, or backpack and have become well acquainted with nearly unending pain along my backbone.  After a couple of major spinal surgeries, though, the pain finally skedaddled and I thought that maybe I would be able to backpack again by my 70th birthday.  For about two years, I thought I was getting back into some kind of shape just in time to be a fit, backpacking 70-year-old.

Then.  Lower back pain.  X-ray: arthritic buildup around my ten-year-old discectomy and fusion in my lower back followed by damn bad neck pain.  X-ray and MRI: Spinal stenosis squishing my spinal cord and sundry nerves coming off the spinal cord through my neck vertebrae.  Okay, said my neuro-doc, we’ll get you steroid and lidocaine shots in your neck when you get back from Canada.  “I want to see the polar bear photos, too.”

Despite the big pain in my neck, the Ungava Bay trip was wonderful (see the photo at the end).  A few days after getting back to Albuquerque, I saw my neurosurgeon’s assistant, who put me in a neck basket for stability and set an appointment with the surgeon the next week—pretty damn quick for New Mexico.  Two days thereafter I couldn’t get out of bed.  Nerve storms radiated out of my spine in the neck.  My arms, hands, fingers started getting weirdly numb and unusable.  I couldn’t hold a fork or a pen.  More nerve storms went down my spine and my legs and feet went numb.  I lost my balance.  Nancy called 911 and I was popped into an emergency ward room for two days. I had a full-hour heavy metal concert with the MRI. The surgeon’s assistant was blown away by my quick downturn and the neurosurgeon scheduled me for a rush operation.

Then, alas, something on the hospital end delayed the surgery for five weeks.

Pain lessened, though, as numbness and lack of dexterity grew.  I lost nearly twenty pounds.  My thinking was rather loopy, and I found it hard to concentrate or hold a thought.  Home visits from physical and occupational therapists helped some of my symptoms, but it was a dreary five weeks—maybe as bad as any I’ve had.  Thank goodness Nancy had retired after twenty-two years at the UNM School of Nursing, and was home to care for me, along with my ever-faithful niece Monica.

When I awakened after surgery, though, I felt better.  My head was less curdled and my fingers felt a little less like blocks of wood.

Now, a month after surgery, I can walk a short while around the house without aid and—very carefully—make it down the stairs to my office.  I can also use the computer, though slowly and sloppily.  And I can also now get serious about having a competent computer neurosurgeon come into my office to exorcise demons, clean up my stumbles and bumbles, or hunt down and kill any outside viral infections.  The Rewilding Blog will let you know when I am back online.

So, now you know why I didn’t answer emails and such and whereto I disappeared this summer and fall.  I am very sorry for leaving folks in the lurch and not responding.

You will be hearing much soon on our work to revitalize The Rewilding Institute.

Until I get my Comcast email straightened out (or get a new email provider), I’m temporarily using Wildeor46@icloud.com.  If you really need to contact me, use that.  Keep in mind, though, that because of my screwed-up hands, I’m slower’n molasses in January. 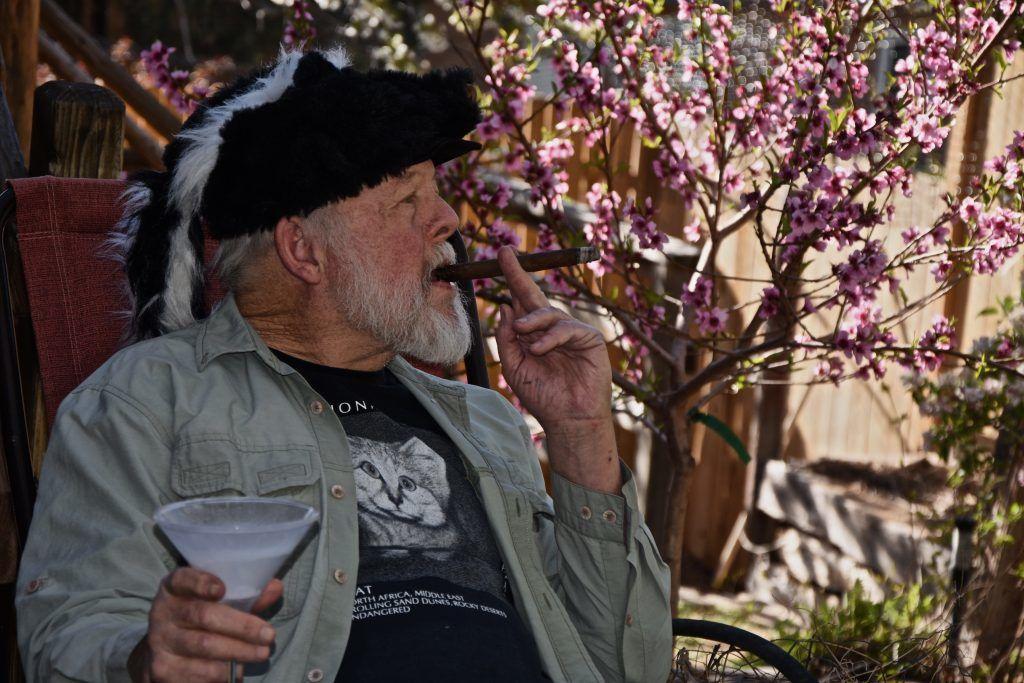 From the deck in my rambunctious garden