#38 Around the Campfire; Five Little Birds and Their Lessons

Ten years ago at the end of a three-week trip in Argentinean Patagonia and the rain-soaked, glacier-whittled southern Chilean coast, I took a nasty fall.   After flying home to New Mexico, my back, which had never bothered me before, grew steadily worse over the coming months.  I soon had to stop running six miles a day and cut back sharply on the weight machine.  Then I had to give up my greatest love, backpacking, and I haven’t been able to hoist a pack onto my back for nine years now.

Though my days as a wilderness trekker seem gone, thanks to fusion surgery, strong pain meds, shoving from my wife Nancy, and some help from my friends, foremost John Davis, I have done several long raft and canoe trips in the Southwest and in Arctic Alaska and Canada.  Nancy and I have begun to scuba dive.   Nonetheless, most of my time is spent working in the living room recliner where our feathered friends who visit our birdbath and spread of feeders endlessly enthrall our fluffy black cat Gila and me.  I’ve tallied sixty-one species in and over our yard.  I cannot overstate how thoroughly I need and love these birds—they are the wild things without which I would not want to live.

Thanks to my living room birding blind, I’ve gotten to know some birds and who they are well.  They have taught me much, five birds most of all, and I think that they can teach my fellow Cannots much, too.  (A Cannot is one like Aldo Leopold, who wrote that there were some who can live without wild things, and others like him who cannot.)

You will see that these birds are not those often held up as beacons of certain virtues such as eagles or owls.  Nor are they bright flashes of many-hued loveliness such as orioles and hummingbirds.  But in their behavior and mood they are anything but drab.  As I have gotten to know them better, their true grit fairly blazes.

So, let’s meet them and hear their tweets of wisdom. 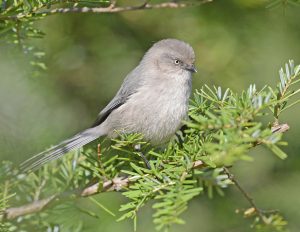 Bushtits are tiny, drab, and gray, but lively, lovable, and winsome in a way that springs out.  They move through our neighborhood in a throng of twenty-five or so, swarming into a piñon tree and cleaning it of bugs and caterpillars, then—zoom—they are off in a straggling, chattering rush to another tree, without a blatant leader.  They are not seedeaters but pack predators.  Were they raven-size, Bushtits would be the fright of Earth.

I have had wonderful meetings with wildeors from leopards to wolves in sprawling, deep wilderness over the world.  In the summer of 2010, I narrowly dodged being trampled and gored by a cranky bull musk ox on the banks of the Noatak River above the Arctic Circle.  But one of my greatest wildlife run-ins was that same summer in my yard with a Bushtit.  I was watering a little patch of Rocky Mountain Penstemons and went to scoot the sprinkler to a dry spot.  As I lifted the hose with the sprinkler head drizzling down, I glimpsed a sudden flash of gray from a nearby New Mexico Locust.  I looked down and there was a Bushtit winsomely perched on my toe and showering under the sprinkler.  It fluffed and fluttered and flapped its wings for half a minute then flew off.  I was in wild-bliss for what was left of the day.

As I wrote, Bushtits have no out-and-out leader.  For all I know, some (grandma and grandpa?) may show leadership now and then thanks to knowledge, age, or wisdom, but overall their might is in the flock.  They teach the strength of grassroots work.  Historian Stephen Fox sees two traditions in conservation: Amateur and Professional (to wit: John Muir/Sierra Club and Gifford Pinchot/Forest Service).  These pathways are not split by whether or not one is paid to do conservation work, nor do they have anything to do with how good one is.  The cleavage is in feeling, with amateurs working for wild things out of love and professionals working to manage land and resources because it’s their job. Some of us who have worked for conservation outfits all our lives are yet amateurs . . .

Five Little Birds is quite wonderful. Thank you.

On the scrub jay and their vision and “theory of mind.” John R. Campbell in absence and light: meditations from the kalmath marshes [sic] hears the “soft entreaties” of a pair of screech owls, and then speaks of animals’ imagination. His wife asked, “Do deer have imagination?” He said, “I want them to, as I want the owls to imagine a kingdom of their own, where I may have some minor presence beyond nuisance, beyond fear. Their passage at an angle to my life is merely an expression of their own ordinary lives. I say merely – I should say miraculously. I should say that imagination itself sweeps the air clean above me. That imagination may be an external force realized in one peculiar form in humans, in other peculiar from in deer, and in still another in owls…We mind more than our own survival: we maintain a larger imagination, a network of skills and survivals beyond the scope of any individual species. So I need the owls to help me bear my everyday life toward the largest possible imagining.”

Cambell does not say whether one (any earthling) can “enter” the imagination of another species. We may impute too much to our own selves if we think we can. Campbell ends this meditation with a wounded saw-whet owl being nursed by a friend; “The owl approached on my blind side and landed calmly on my head…suddenly and wholly there… I was at the moment simply a perch; I have been so ever since. This is one of the honors of my life.”

Uncle Dave: I am creating a small wild place in the back yard of my suburban tract house. I would like for you to meet my bushtits up close. They may not appear every day, but they are regular visitors. The Western Scrub Jays help themselves to leftover cat food, and the Chestnut-backed Chickadees enjoy the hummingbird feeder.

Uncle Dave: This is one of your most moving and inspiring essays ever — and to think it came not from an amazing wilderness experience but from simply continuing to love and “must-need” nature in the more limited ways available to you now as a decrepit old man. Bravo!

How true it is that if we pay attention to the lives that share our personal landscapes, we can find additional inspiration to help us do our jobs of conservation, education, and other worthy work. Quail, doves, finches, and woodpeckers distract me at this very moment, and I wouldn’t have it any other way. Occasionally a major predator enters the picture–here most often the Cooper’s Hawk. I invite you to check out my essay on “Aerial Assassins” in my blog: http://www.geolobo.com/?p=211. Raptors may shape ecosystems in ways parallel to those of wolves or jaguars, and they certainly deserve our respect and attention.