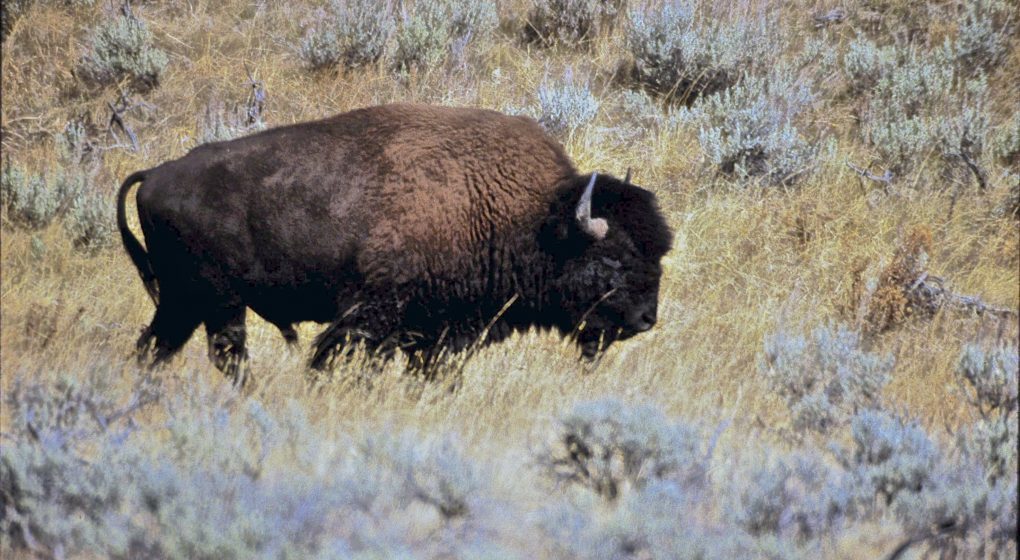 #54 Around the Campfire; The Buffalo Are Gone

My Crawford pioneer family came among the earliest settlers to southwestern Missouri, and other branches drove their heaped-up wagons in over the next twenty years.  All the streams that came together to make my mother’s branch of my family were farming on that edge between hickory forest and Tallgrass Prairie before the Civil War.  Eye-stretching flocks of passenger pigeons yet darkened the skies to the east.  And to the west, another thundering river of life flowed by in a leaping, roiled flood at times, then would go dry.  The buffalo herds were here one year, there another.  And they were many.  At the end of the Civil War, there were some 50 to 60 million bison, 40 million pronghorn (wrongly called antelope), and over two million elk grazing on the Great Plains from Alberta to Chihuahua.  In 1871, Wyatt Earp, famous lawman/less-famous outlaw, stood on a hill in Kansas:

I could see, twenty or thirty miles in each direction.  For all that distance the range seemed literally packed with grazing buffaloes…the prairie appeared to be covered by a solid mass of huge, furry heads and humps, flowing along like a great muddy river…Clear to the horizon the herd was endless. 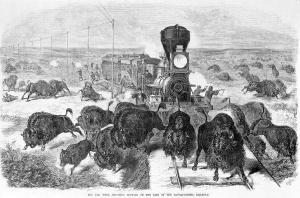 But in 1869, the Central Pacific and Union Pacific railroad lines met in Promontory, Utah.  With fast cross-continental shuttling began the great slaughter.  Railroads hired hunters to feed the rail workers.  One, Buffalo Bill Cody, boasted of having personally killed 4,280 buffalo in one year.  The railroad hauled meat, hides, and bones east.  With the butchery flowing out from the tracks, the tens of millions of bison on the plains split into two great herds.

Peter Matthiessen writes, “The southern herd was the first to go.  Between 1872 and 1874, well over a million animals were shot yearly, and five years later a solitary survivor met its end at Buffalo Springs, Texas, on the cattle trail to Santa Fe.” Goodness only knows what that one, lone, last bison thought.  In its mind, did it speak to the Texan, “I knew you would come.”

The northern herd lasted a little longer only because the Northern Pacific Railroad did not give rail access until 1880.  Then, wrote Matthiessen:

[D]efeated Indian tribes joined forces with the buffalo hunters.  They worked toward their own destruction willingly and well, and in 1883 a mixed company of Crees and whites trailed the remnants of the northern herd to the Cannonball River of North Dakota.  There, by cutting off access to water, the hunters accomplished the destruction of the entire herd.

The buffalo was gone.

The great herds that had swept like a prairie fire from Chihuahua to Alberta had been slaughtered in a spree of gore and greed such as the world has never seen before or since.  A few stragglers found shelter in Yellowstone National Park in Wyoming and far up in northern Alberta.  A handful of others hid away near Lost Park, Colorado.  A few ranchers corralled one or two buffaloes or tiny herds.

Teddy Roosevelt ranched in North Dakota in the mid-1880s.  He wrote:

No sight is more common on the plains than that of a bleached buffalo skull; and their countless numbers attest the abundance of the animal at a time not so very long past.  On those portions where the herds made their last stand, the carcasses, dried in the clear, high air, or the mouldering skeletons abound.…A ranchman who at the same time had made a journey of a thousand miles across northern Montana, along the Milk River, told me that, to use his own expression, during the whole distance, he was never out of sight of a dead buffalo, and never in sight of a live one.

At the time that Roosevelt ranched in North Dakota, my grandfather’s uncle, Billy Crawford, rode through the southern plains from Missouri to Albuquerque, New Mexico.  There were no living bison.  Like Roosevelt’s friend, he rode through a boneyard hundreds of miles long.

Our sad tale does not end here.  For there are grim—even gruesome—deeds, little-known today, which make the buffalo slaughter even worse than you may have thought.

1872 is a hallmark year for conservation because it was the year Yellowstone National Park was set up by law.  However, 1872 is also a dark year for conservation because that year a bill to shield bison from slaughter died, although both houses of Congress had passed it. The bill was written by the Territorial Delegate from Arizona, R. C. McCormick, who had watched the wasteful shooting of bison on train trips across the Great Plains.  On the floor of the House, McCormick scorned and slammed the “reckless slaughter of that noble and valuable animal, the American bison or buffalo.”  He quoted a Harper’s Weekly editorial that called the slaughter “neither wise nor sportsman-like.”  By showing letters from Army officers on the Great Plains that were against the killing and called for keeping bison, McCormick smacked down those who said that bison had to be wiped out to tame the Plains Indians.

Other Americans, many of them sportsmen, were also angry over what they had heard of the slaughter.  National hunting magazines started up in the 1870s, and they jumped into the fight against market hunting and fishing and for habitat protection.  Sport hunters and their magazines raised a din against the crazy slaughter of the buffalo. Nonetheless, President Ulysses S. Grant let the bill die without his signature.  Of all the things Grant did in his life, killing the bison protection bill was the worst. There were tens of millions of bison still alive in 1872.  Had Grant signed the bill, the greatest animal slaughter in United States history would have been stopped and millions of bison likely would still roam o’er much of the plains as wildlife.  Grant’s smothering of the bison bill shoved many sportsmen into becoming conservationists.

Please click here to read the entire Campfire with footnotes.