A January 2021 article in the New York Times mostly blames climate change for the well-documented demise of Pacific salmon populations in the Pacific Northwest.

Yet even the notoriously pro-population growth, climate-activist NYT couldn’t hide the fact that swelling human numbers are also an enormous factor in the loss of these iconic fish that help define the character of a region so blessed with wild natural beauty and resources that it was dubbed “Ecotopia” by authors Ernest Callenbach, Joel Kotkin, and Joel Garreau. 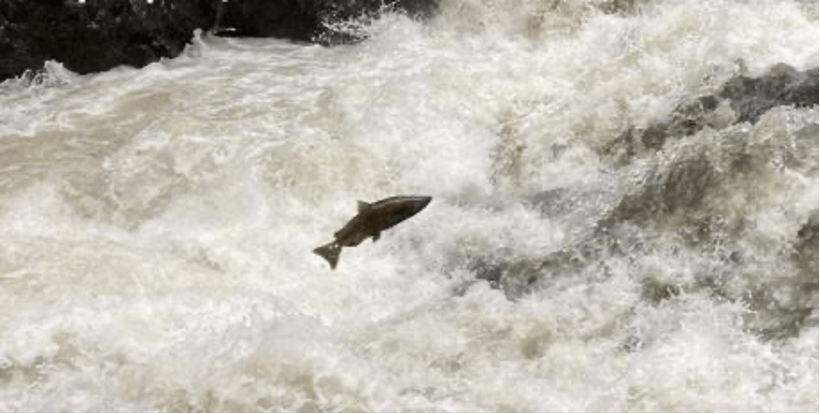 Classic image of the will to perpetuate its kind – a Pacific salmon leaps above a waterfall on its hard-fought journey upstream to spawn…and then die. (Photo credit: Washington Governor’s Salmon Recovery Office)

Citing the executive coordinator of the Washington Governor’s Salmon Recovery Office, the NYT article observes that:

“One of the largest factors inhibiting salmon recovery is habitat loss…. A growing human population has led to development along the shoreline, and the addition of bulkheads, or sea walls, that encroach on beaches where salmon generally find insects and other food. More pavement and hard surfaces have contributed to an increase in toxic storm water runoff that pollutes Puget Sound. [emphasis added]

“More than 20,000 barriers — including dams, roads and water storage structures — block salmon migration paths in Washington alone, according to the state’s Department of Fish and Wildlife.”

There are six species of Pacific salmon in the taxonomic genus Oncorhynchus, each of which has two commonly used names: chinook (king), coho (silver), sockeye (red), chum (dog), pink (humpback), and the steelhead trout, which is the anadromous form of the rainbow trout. 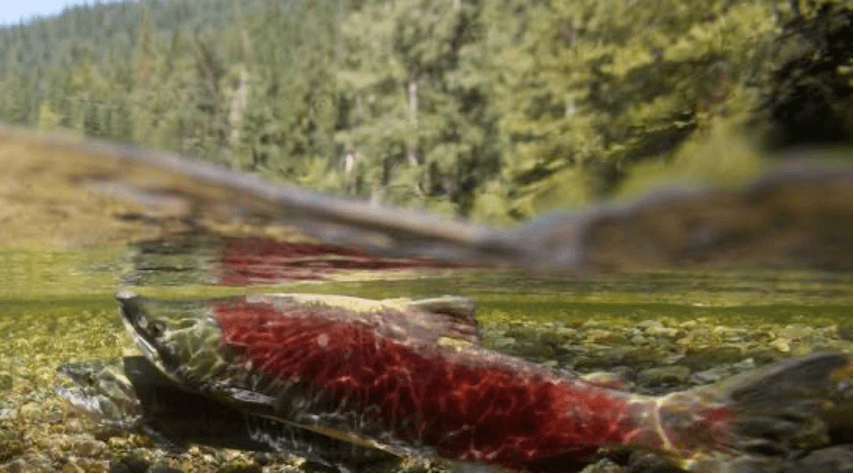 Sockeye salmon in spawning condition in a freshwater stream (Little Wenatchee River in Washington); it is easy to see why they are also called red salmon. (Photo credit: Ryan Hagerty, U.S. Fish and Wildlife Service)

An anadromous fish species, such as the salmon, is one that migrates from saltwater to freshwater to spawn (reproduce).  Females typically lay their eggs in the gravel or sand of streams, rivers, and lakes, and their attending mates, at their side, squirt their semen (called milt) onto the eggs to fertilize them. Tiny alevin hatch in the spring, still attached to their yolk sacs, and the juveniles of all but the pink salmon live for one or more years in freshwater habitats, before turning into silvery smolts and migrating downstream to the ocean. 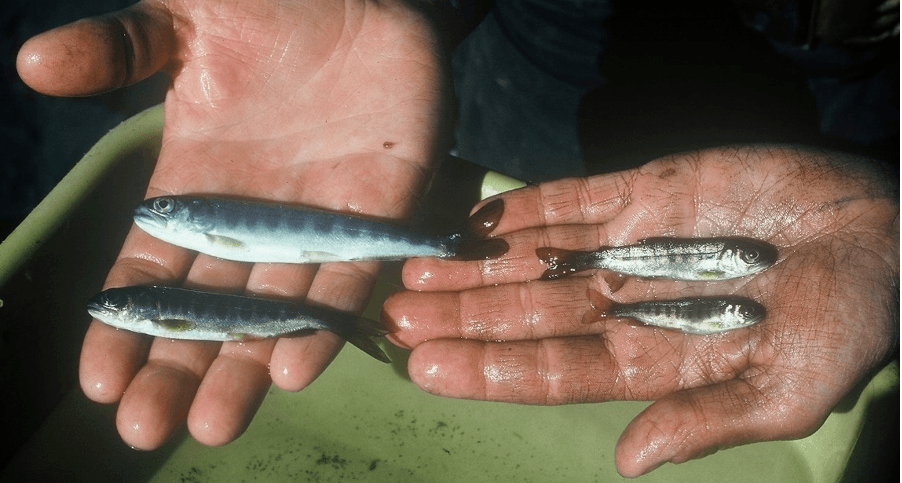 Pacific salmon may spend up to several years out at sea, foraging in upwelling-fed, highly productive marine waters.  They gorge on macroinvertebrates such as pteropods, amphipods, and krill, and other smaller fish like herring. Meanwhile, they grow rapidly – increasing their weight by 100 times or more in a single year – and mature into adults. 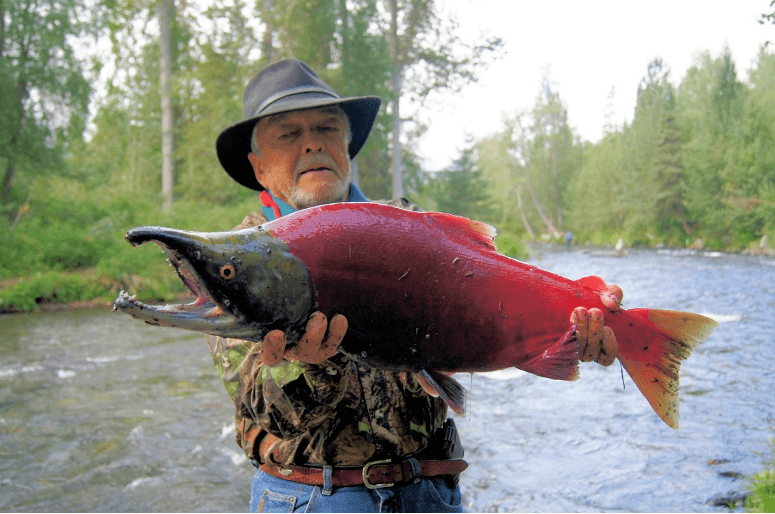 Male sockeye salmon in spawning colors (green head, red body) with its humped back; when at sea, the sockeye and all other Pacific salmon are silvery. (Photo credit: Barbara Jackson from Pixabay)

In one of nature’s grand and enduring mysteries and marvels, from hundreds of miles away in the ocean, adult salmon somehow find their way back “home;” they navigate back to their natal streams (where they hatched).  They prefer to spawn on gravel beds, and you can see two-foot-long, 15-lb. coho salmon wriggling and squirming their way up gravelly creeks that are so small and shallow that the salmon’s back juts out of the water.

Bears, eagles, ravens, and gulls all feast on the glut of salmon, especially after they have finished spawning and are too weak to resist or escape. It is one of nature’s most impressive and profound spectacles.  Many creatures depend on this salmon-fest to gain enough fat to survive the upcoming lean winter months. 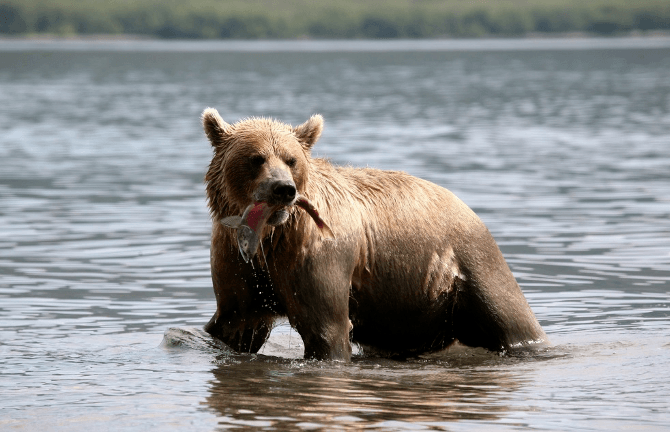 Those fish that escape the bear’s claws and the eagle’s talons start to literally disintegrate while they are still alive:  their skin falls off in patches, exposing raw flesh beneath; chunks of flesh drop out, exposing bones. Within days of putting their fertilized eggs safely to bed, the salmon parents are too enfeebled to continue resisting the current.  It pushes them downstream, where their dead and dying bodies pile up against log jams and protruding rocks.

At last, having fulfilled their obligation to ensuing generations, the salmon perish en masse and are then eaten or decompose, returning nutrients to the soils, forests, and waters that nourished them in their youth. It is the very essence of the Circle of Life. 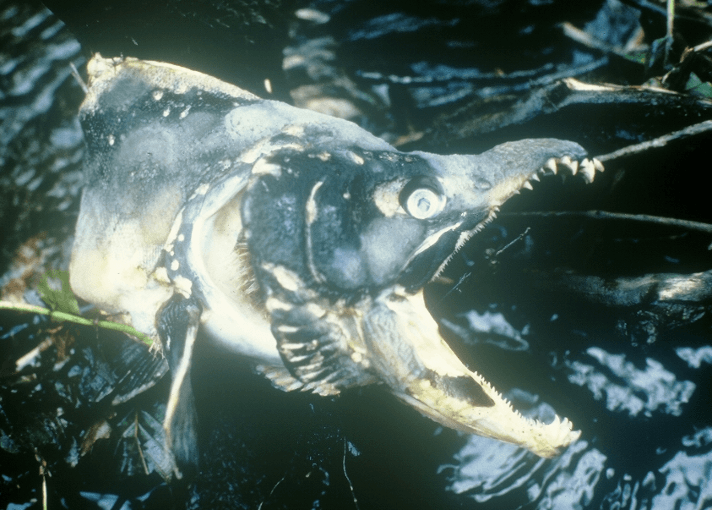 And the reward for surviving long enough to reproduce and pass your genes onto the next generation? Inevitable death. A dead pink salmon in its morbid death pose, jaws agape, draped over branches and roots next to a spawning stream. (Photo credit: Leon Kolankiewicz)

I am extremely lucky to have worked closely with wild salmon (as opposed to hatchery salmon) as a fisheries biologist and technician in Alaska with the Alaska Department of Fish and Game and the National Marine Fisheries Service.  I physically handled – touched and tagged, that is – hundreds of thousands of salmon during my career there.

One of the lessons I learned most vividly is that wild salmon stocks (populations) are highest where human populations are lowest. This is why salmon survive in far higher numbers in thinly populated Alaska and British Columbia (Canada) than in Washington, Oregon, and especially California to their south.

As those states have filled up with people and their dams, reservoirs, roads, dikes, levees, culverts, clearcut forests, mines, water pollution from silt and toxins, water withdrawals for irrigation and municipal consumption, dredging and filling, and so forth, salmon populations inevitably plummet and the best we can do is “mitigate” the damage to salmon stocks.  Usually to just a fraction of what was once there before increased human population and all the accompanying development.

The Columbia River basin, with its scores of hydroelectric dams providing “clean, green, non-polluting, renewable” energy, once supported the largest king salmon stocks on Earth.  The king salmon still survives in the Columbia, albeit at perhaps one percent of its former abundance.  And that’s with a lot of help, expense, and tender, loving care.  There’s only so much that fish ladders, hatcheries, and other techno-fixes can do.

According to the Executive Summary of the 2020 State of Salmon in Watersheds, 14 populations of salmon and steelhead trout in Washington State have been listed as endangered and are protected under the Endangered Species Act.  Of these 14, 10 are not meeting their recovery goals and 5 of those are considered to be “in crisis.”

The paucity of chinook salmon in particular – the major food source of the Southern Resident Orca population in Puget Sound and the Salish Sea – is a leading factor in the orcas’ tragic demise.  Barely 70 of these cherished creatures survive today – compared to millions of human residents (and more every year) in the watersheds that dump their filth into these waters.

Yet on the very first page of the Executive Summary, the Washington Governor’s Salmon Recovery Office states boldly:

“We can change course and put Washington on a path to recovery that recognizes salmon and other natural resources as vital to the state’s economy, growth, and prosperity.” [emphasis added]

In other words, not only is endless human population and economic growth compatible with restoring salmon numbers, but those restored salmon numbers can even contribute to the goal of endless growth that is the root cause of their demise in the first place!

Not to put too fine a point on it, this amounts to little more than managerial conceit, wishful thinking, or wanting to have your cake and eat it too. 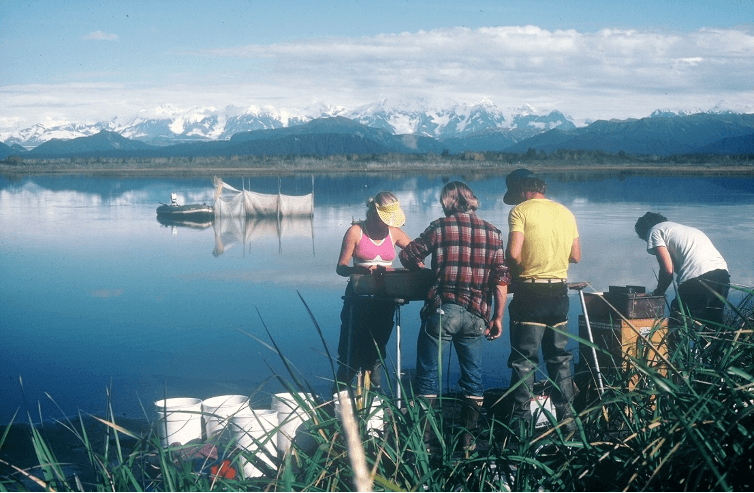 Tagging juvenile coho salmon in the Alaskan wilderness; wild salmon stocks do best where there are very few people…or none at all. Then the wildlands amount to clean “salmon factories” rather than polluting human factories. (Photo credit: Leon Kolankiewicz) 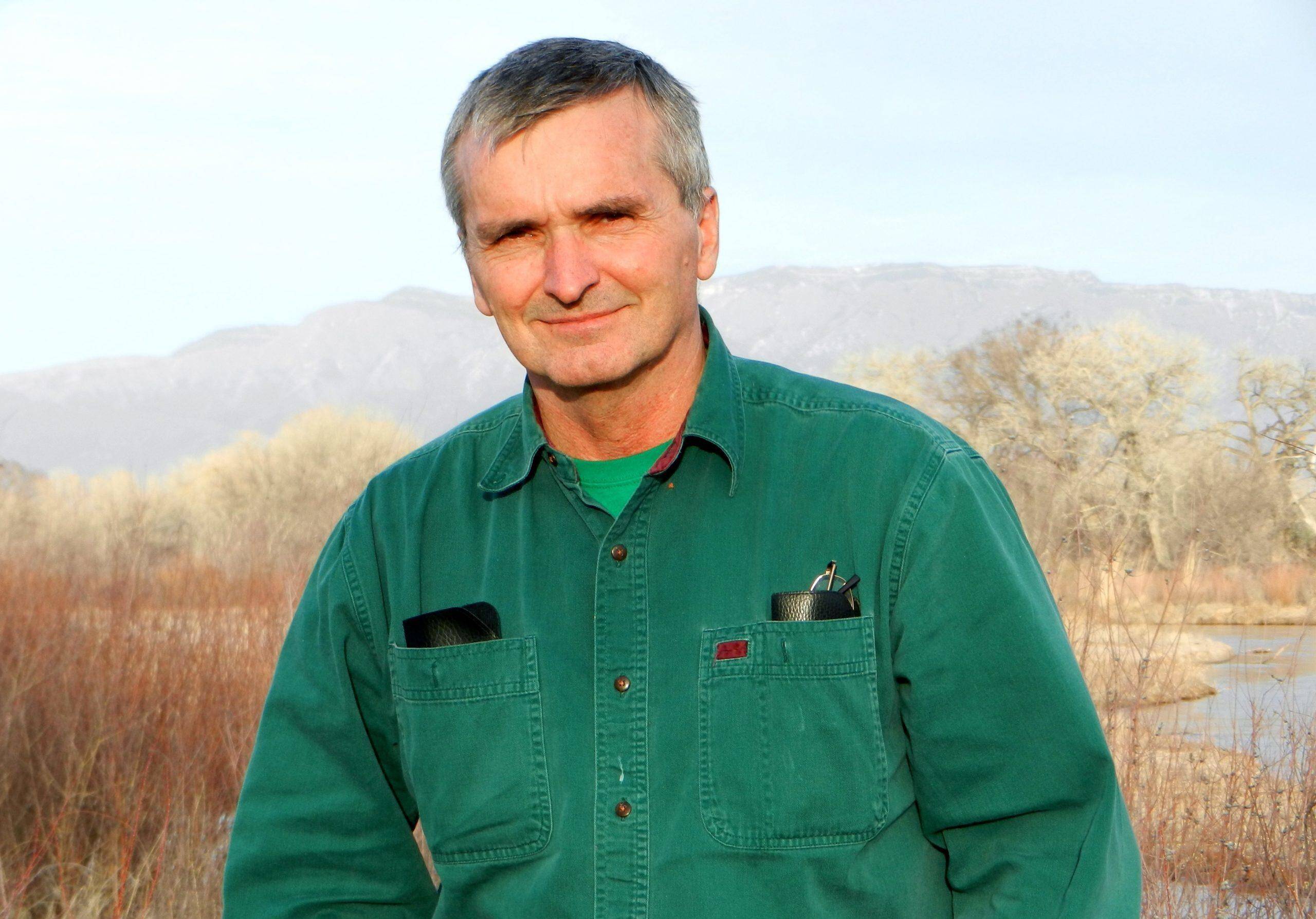 I live in the city of Mountain Home, which is 45 miles or so east of the “big city” of Boise, the city that, in the not-to-distant-future, will anchor a metro area running all the west to Ontario, Oregon. I watch in horror each and every day as yet another sprawl subdivision explodes into single-family homes to the west of me. It’s asphalt streets and concrete driveways replace land that once had nesting Western Meadowlarks on it. That’s all gone now, replaced by yet another “nowhere” subdivision of cars, cars and cars. It isn’t growth for people; it’s growth for the sake of growth and greed. The sockeye salmon I remember watching in a mountain stream in central Idaho during my teen years are long gone.