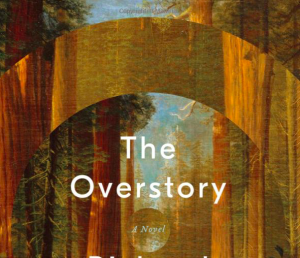 Book Review of The Overstory, by Richard Powers

There’s a fire backstage, he says. The clown comes out to warn the audience. Laughter and applause. They think it’s a joke! The clown repeats his warning. The fire grows hotter; the applause grows louder. That’s how the world will end, Wittgenstein says: to general applause, from halfwits who think it’s a joke.

The best arguments in the world won’t change a person’s mind. The only thing that can do that is a good story.

Human beings are both acquisitive by nature and oblivious to the long-term consequences of that impulse. That, in a nutshell, is why we’re destroying the planet. Scientists’ warnings, even when buttressed by compelling visual evidence, seem powerless to override our everyday “out of sight, out of mind” mentality; and a political environment that encourages disdain for facts only exacerbates the problem. Well, maybe a good story is what we need. Richard Powers’s monumental new novel makes our planet’s heartfelt plea. Yes, Powers writes superb fiction, but it incorporates breathtaking facts gleaned from meticulous research, revealing an astonishing level of scientific literacy.

I doubt that anyone other than Richard Powers could write a captivating 500-page novel about trees. Granted, there are some very interesting human characters in the cast as well, but they tend to subserve the environmental theme. From The Overstory we learn that trees in a forest are highly interconnected. They signal each other, and they share resources. They clean the air and yield medicines. They are remarkable in their vast diversity and adaptability. Although trees predate Homo sapiens by tens of millions of years, we share 25% of our genes with our common ancestor. (These sorts of findings have been reported elsewhere, if far less passionately, most recently in the June 2018 issue of National Geographic.)

But trees are disappearing at an alarming rate. “Seventeen kinds of forest dieback, all made worse by warming. Thousands of square miles a year converted to development. Annual net loss of one hundred billion trees. Half the wood species on the planet, gone by this new century’s end” [p. 388]. 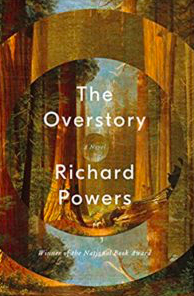 Powers’s lush descriptions of trees from all over the planet give the impression that he has viewed them personally, and the reader can’t help but lament the rapid and irretrievable disappearance of such majesty and beauty. So do many of the characters in The Overstory – there are nine in all – who, thrown together by chance but connected by arboreal interests, are moved to take direct action, engaging in protests, “tree-sits”, and even arson. (Somehow, “eco-terrorism” can be treated sympathetically when the alternative is obliteration of Earth’s great treasures.)

The science in The Overstory is presented through Patricia Westerford, a dendrologist whose cutting-edge research is initially dismissed by various academic peers, but years later is vindicated by others. During this long period of limbo, Dr. Westerford continues her investigations independently and inconspicuously, but reluctantly re-emerges into the academic/public sphere once her reputation has been rehabilitated. She writes a book that becomes a bestseller.

While Pat Westerford is thoroughly immersed in the physical world, another character – Neelay Mehta – is drawn to virtual worlds. Mehta, a gifted computer programmer, constructs an increasingly sophisticated online game called Mastery that attracts millions of players around the globe. Eventually, however, in an online encounter with another avatar, he is forced to confront the consequence of his success: “Midas problem. People build shit until the place fills up. Then you gods [programmers] must make another continent or introduce weapons” [p. 377]. Mehta devises a solution: “No new continents. No sudden spawning of new mineral deposits. Regeneration only at realistic rates. No rising from the grave. A wrong choice in the game should lead to permadeath” [p. 413]. Unsurprisingly, this idea is not favored by Mehta’s team of programmer-millionaires, who believe that their fortunes depend upon the old formula. Mehta is outvoted by every one of them. “The massively parallel online experience will go on, faithful to the tyranny of the place it pretends to escape” [p. 414]. Had Mehta’s proposal been implemented, Mastery devotees might have learned something essential about the real world. Instead, to see what he envisioned, they will have to look away from their screens and take stock of what is in their own back yards.

In his eleven previous novels, Richard Powers constructed highly inventive plot lines, while demonstrating an amazing technical grasp of various subjects (e.g., computer programming, genetics, business, history, birds, medicine, and music). His characters are often not thoroughly fleshed out, but his books ultimately seem to be more about ideas than people. The Overstory fits this model, although it also inserts (very) small bits of melodrama and neo-mysticism. But that’s OK with me if it helps to get the point across. Trees have important things to tell us, and if we ignore their message, they will surely have the last word.

We have reached a tipping point in history where we human beings must cease our hubristic efforts to dominate and exploit nature, accept the fact that we are just a part of a highly interconnected ecosystem, and start acting accordingly. The alternative is a planetary catastrophe. So far, stark scientific data have not convinced reluctant individuals and their governments to take this choice seriously. But is The Overstory capable of changing minds where arguments have failed? Well, how could any story have the power to do this? The answer surely lies in a reader’s emotional connection to a story’s characters. Stories can make us weep or arouse anger; they can elicit feelings of pride or disgust. Well-drawn characters can provoke reactions of sympathy or fear. And emotional arousal can change attitudes.

For all of its accomplishments, however, The Overstory doesn’t operate on that level. We learn a lot about the characters’ biographies, but little about their personalities. We hardly even know what they look like, and we don’t glean enough about their innermost feelings to make us identify with them. To me, Powers’s characters simply lack sufficient substance to generate powerful emotional reactions. The ideas presented in this novel could certainly change a receptive mind, but I suspect that few if any readers who approached it with an attitude of favoring corporate interests over the environment would undergo a reversal of opinion by the end. In fact, it would be surprising if any such reader were even to open the book; after all, we live in a time when many people’s information consumption is restricted to sources that they expect will conform to their predispositions.

I hope I’m wrong about that, for The Overstory deserves the widest possible audience. It’s a great novel on a topic of great importance.

Charles Dunlop is a professor emeritus of philosophy. He now spends his time reading, traveling, building and repairing computers, and playing his guitar and banjo.

National Parks Forever: Fifty Years of Fighting and a Case for Independence

What I liked about this book was the opportunity to follow along as a participant with a group of people who understand the problems of habitat destruction. It made me feel less alone in my own travails concerning how to live on our increasingly devastated planet. It also reintroduced me to the groups working on restoring the American Chestnut, so I am excited about the possibility of soon having a blight resistant chestnut in the near future. It was a journey reminiscent of the Monkeywrench Gang but with the logical understanding that striking out with violence or fighting society doesn’t really work. Learning about tree and plant communication was great fun.

I look forward to his next book. And hope perhaps it will imagine a world where we have solved the problem of ever increasing populations, and ever desiring more and more. Can we realistically imagine our way to a satisfying community where we are in stasis and where our economics is governed by ecological principles? This book doesn’t get that far, but it leads us up to that precipice…will we jump or fly?