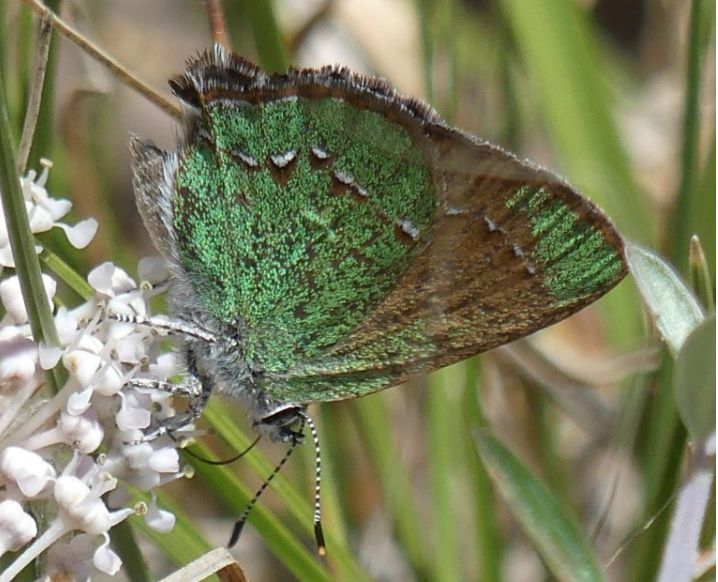 Bramble Hairstreaks in the Jemez

Blog by Steve Cary, of the Parajito Environmental Education Center

Long-time botanist friend of mine, Chick Keller, recently photographed a butterfly, emailed the pic to me and asked what it was. After glancing at the spectacular green wings atop a yellow flower, I told him: “This is Callophrys affinis, Canyon Green Hairstreak or Western Green Hairstreak.” Apparently my reply was not as clear as I intended because he soon got back to me: “How do you tell a western from a bramble?” To that I relied, rather lamely, that those were all names for the same butterfly.

Bramble Hairstreak has gone by multiple names, Latin and English, over the past few decades, as reflected in field guides of different regions and different vintages. “Bramble Hairstreak” is a sprawling, complicated group of similar-looking critters. Scientists are still struggling to make sense of which are full species, which are merely subspecies, and which is which. If scientists aren’t consistent about taxonomy and nomenclature, then we can’t realistically expect the common English names to be clear either.

Chick said there were quite a few Bramble Hairstreaks on the Jemez Mountains trail where he got his photograph and I believed him. It was the third or fourth Bramble picture I had been asked about from the Jemez Mountains since early May. It made sense to me that there would be a lot of them because of all the thousands of acres that forest fires have burned in the Jemez over past two decades.

Resurgence of wildfire over the past 20 years in New Mexico’s montane landscapes has reinvigorated natural plant communities and food webs which evolved with fire but had gone without it for decades. Admittedly, those wildfires pose stiff challenges for us humans, nor are they perfect replicas of the fires that prevailed in our landscapes previously. Nevertheless, those burns are helping to regenerate native plant communities and food chains that are not merely fire-tolerant, not merely fire-adapted, but truly fire-dependent.

Bramble Hairstreak exemplifies that fire dependency because its caterpillars eat one of those fire-dependent plants: Fendler’s Buckbrush (Ceanothus fendleri; Rhamnaceae). Fendler’s Buckbrush is a modest, prostrate, white-flowered shrub, a popular forage for deer (hence the English name). It inhabits ponderosa pine savanna openings and may survive for, say 30 years. All that time it produces seeds which tumble to the ground in autumn. Covered with a waxy coating that repels water, buckbrush seeds are not tempted to germination. Unable to sprout, they accumulate in the litter and soil around the plant for years, perhaps decades, even as the parent plant may senesce or be shaded out by forest succession.

What does it take to germinate buckbrush seeds? It takes a fire warm enough to melt the paraffin coating, but not hot enough to kill the seeds, what foresters call a “cool” ground fire – maybe 200 degrees F. After the waxy coating is gone, the next wet season triggers germination of hidden banks of stored buckbrush seeds. Naturalist Terry Foxx* explained that this plant sprouts prolifically after fires from seeds that accumulated in soils. I suspect this is what has happened in the Jemez Mountains. Maybe my botanist friend, Chick, will get back to me on the current extent of Fendler’s Buckbrush in the Jemez.

A second plant that seems to be in that “fire-climax” category is Winged Buckwheat (Eriogonum alatum; Polygonaceae). It is a slender, sparsely foliated, biennial forb that grows up to four feet tall in the same habitats as Fendler’s Buckbrush. During the 1990 Los Alamos Butterfly Count (now the Dorothy Hoard Memorial Count), we found Bramble Hairstreak caterpillars chewing on Winged Buckwheat, confirming that plant species as a larval host, too.

Fire has consequences, good and bad, but so does the absence of fire. During the 1990s, my colleague Dick Holland and I were concerned about the dearth of Bramble Hairstreaks in the Lincoln National Forest of the Sacramento Mountains complex in south-central New Mexico, where there had been many decades of generally successful wildfire suppression. A handful of older Bramble records dated 1961-1978 from New Mexico State University’s Montgomery Biological Research Station north of Ruidoso, showed it had once been there. Between the two of us, however, we could not find any. Upon revisiting the site of the NMSU research station in about 1999 we found no Brambles and no Buckbrush, so we presumed that colony had been extirpated by ongoing plant succession and lack of fire.** We did not find it anywhere else in those mountains either and we were concerned that it might simply have vanished because its host buckbrush had become rare due to rampant and unabated forest succession. I’ll leave the rest of that story for another time, as former radio personality Paul Harvey might have teased.

Wildfires are terrible phenomena that destroy many things, but lightning and square miles of fuel make them inevitable: fire is a natural process in our ponderosa pine forests. Their predictable destruction creates new opportunities which infinite nature is fully geared to exploit. Now Bramble Hairstreaks are appearing as fingernail-size, green triangles on sunny shrubs or nearby yellow flowers. They are glistening emeralds when fresh from the chrysalis but they become dusty, gray-brown after flying for a couple weeks. They now are mating, then placing eggs on Fendler’s Buckbrush and Winged Buckwheat. Those eggs will hatch and larvae will munch. If we have decent rains this summer, those youngsters will pupate and ultimately take wing as adults in August.

I hope you get a chance to see one, wherever you are in New Mexico. If you do, please contemplate that wildfire connection.

* Foxx, Teralene S. 2013. Fire Effects on Plants of the Jemez Mountains and the Pajarito Plateau. Published by the Author. 119 pages.

The Pajarito Environmental Education Center (PEEC) originally published this blog post. PEEC is the non-profit organization that operates the Los Alamos Nature Center. In addition to operating the nature center, PEEC hosts regular events, classes, and other programs designed to connect people with nature in Northern New Mexico. The nature center is currently closed due to COVID-19, but PEEC is continuing to connect people with nature through online events, blog posts, and a summer nature challenge. Visit Steve Cary’s New Mexico Butterfly Blog on the PEEC website to read his other blog posts about our state’s butterflies. His next book, Butterflies of New Mexico, will be published on the PEEC website in the future. If you’d like to learn more about the nature you see in Northern New Mexico, be sure to check out PEEC’s online Nature Guides!