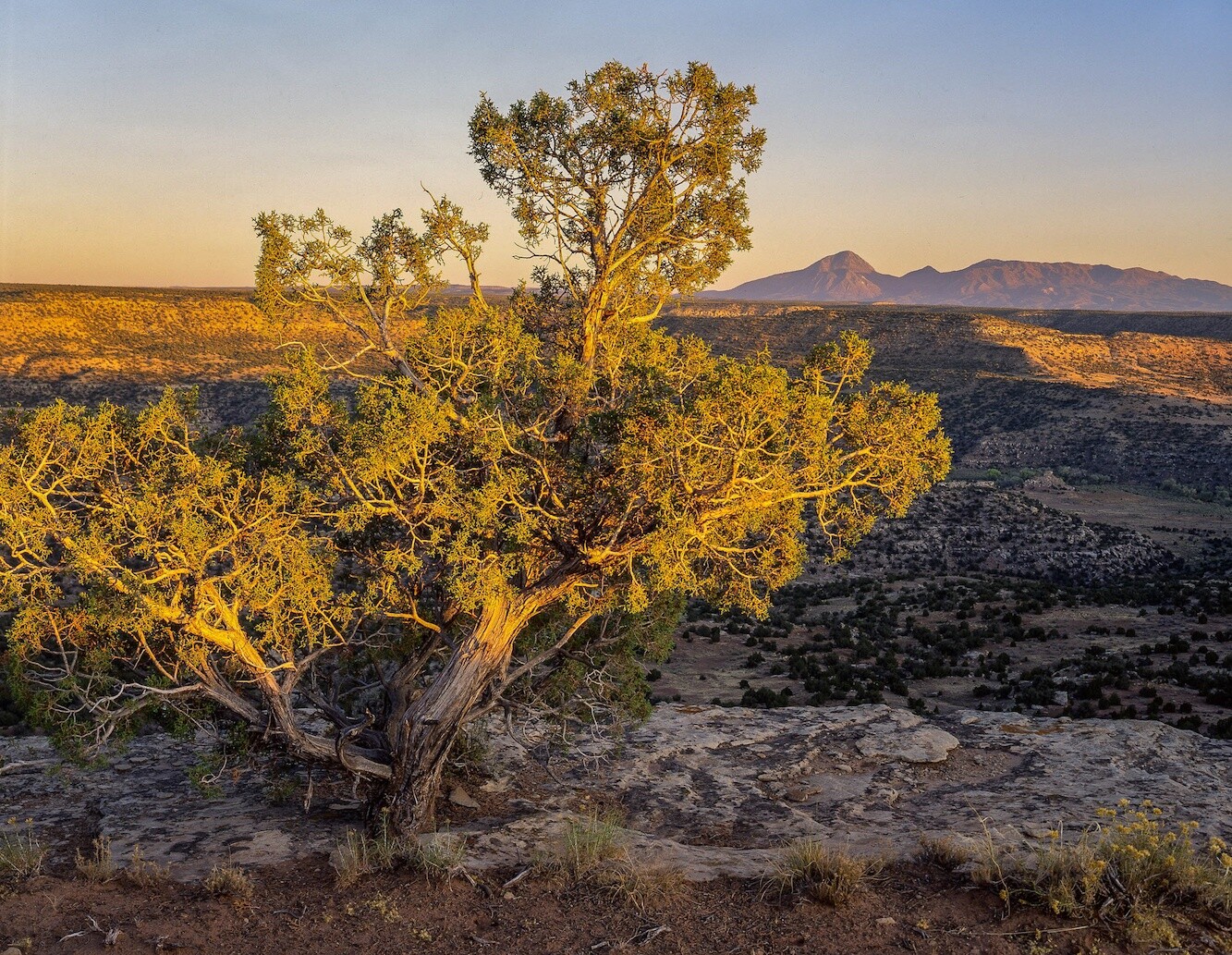 Canyons of the Ancients National Monument – A Case for Rewilding in Progress January, 2021

Canyons of the Ancients National Monument protects abundant and well-preserved examples of Ancestral Puebloan culture, as well as dramatic landforms, a wide variety of wildlife species, and primitive recreation opportunities. Today it spans 176,000 acres in the southwestern corner of Colorado. It is perhaps most renowned for the highest known density of archeological sites in the United States; Canyons of the Ancients has more than 6,000 recorded sites, part of an estimated 30,000 in total.

But Canyons of the Ancients perhaps surprisingly also provides a compelling story of successful rewilding. Compared with the landscape condition at its establishment in 2000, it is today more remote and faces fewer development threats.

Canyons of the Ancients National Monument was proclaimed in 2000 by President Bill Clinton primarily to encompass the landforms and ecosystems upon which Ancestral Puebloan people relied for sustenance, and to recognize the interconnected nature of their robust pattern of human settlement. Rather than fencing off a few acres for a postage-stamp sized preserve as typical of many archeological sites (like nearby Hovenweep National Monument), Canyons of the Ancients protects an entire landscape that supported thousands of people. The Monument allows us to understand why Ancestral Puebloans chose to live where they did; how they interacted with their neighbors, used the natural resources of the region, communicated with others, and worshipped; and why their communities changed over time. It provides insight to the social, political, economic, and ceremonial dynamics that energized the entire civilization. 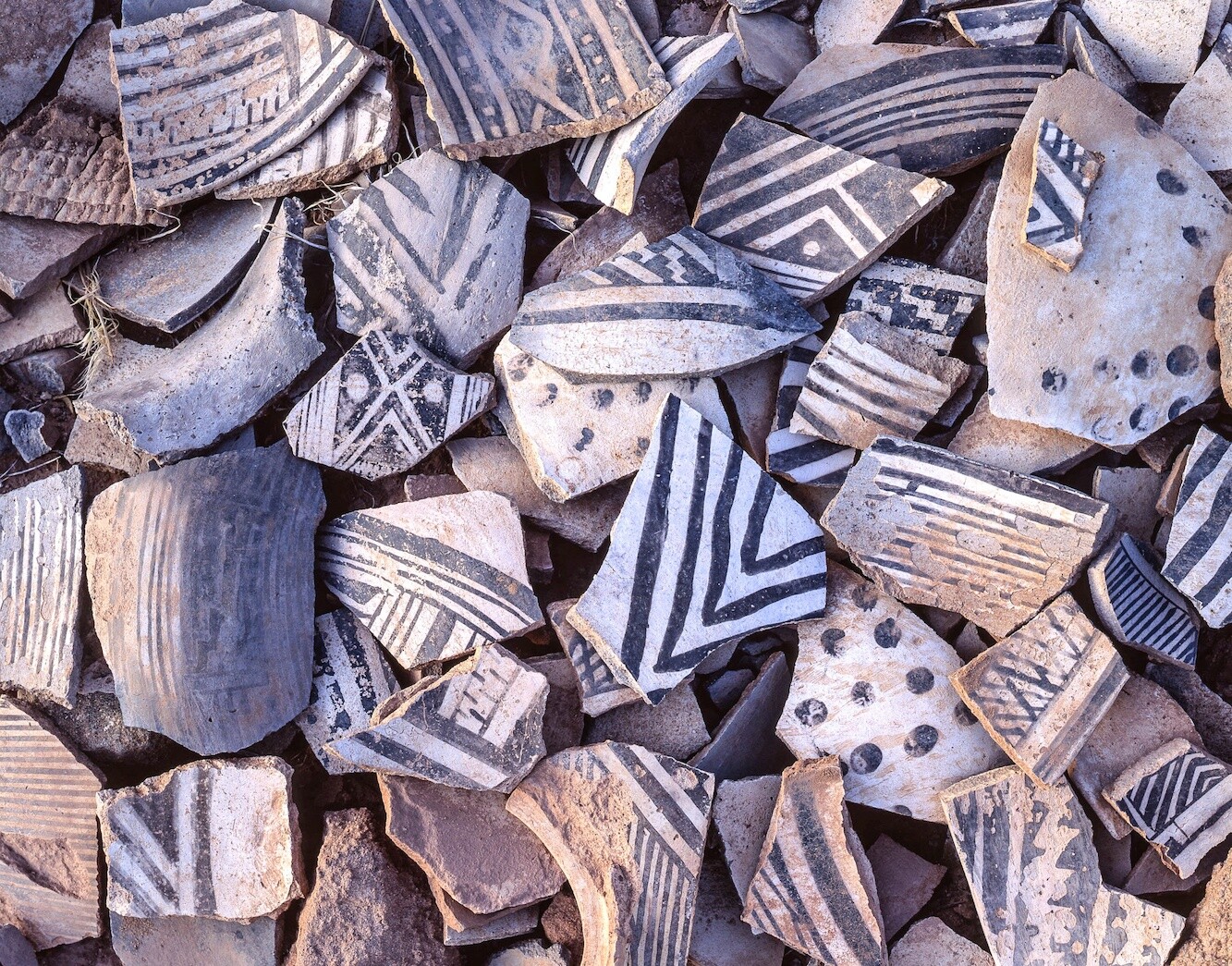 Pottery sherds whose protection is enhanced by virtue of remote location within Canyons of the Ancients. (Photo credit: John Fielder)

The Monument’s Proclamation brought forth the opportunity to protect, and enhance, the region’s remoteness. It offers the chance to experience how people traversed this landscape 1,000 years ago, absent roads and motor vehicles. Remoteness is particularly crucial to protecting the rich cultural heritage from looting and desecration, given the direct correlation of accessibility by vehicles with vandalism.

Twenty years later, the establishment of Canyons of the Ancients National Monument has resulted in a wilder and more remote landscape, one with stronger protections from extractive activities and with expanded non-motorized core areas. The Monument’s Proclamation directly resulted in a vast reduction in open motorized routes, focused efforts to consolidate conservation ownership, and retired leases from oil and gas development.

Prior to the establishment of Canyons of the Ancients National Monument in 2000, there existed 131 miles of official open motorized routes (and perhaps dozens of miles more of unofficial routes). The Monument’s management plan cut that by almost one-half, leaving 76 miles of motorized routes, primarily roads for standard-size vehicles.

More important than just the reduction in motorized mileage is the location of those changes. Entire canyon systems are now restricted to foot and horse travel only, including over a dozen miles of Woods Canyon and Sandstone Canyon that once contained user-created jeep roads constructed decades ago for livestock management and mineral exploration.

The Monument’s establishment elevated the region’s priority for conservation land acquisitions. At the time of its designation in 2000, the BLM managed about 165,000 acres within the Monument boundary. After a half-dozen purchases and land exchanges, the land base of Canyons of the Ancients has grown through acquisition of more than 10,000 acres of private inholdings to almost 176,000 acres. These include all of the private lands in the southwest corner of the Monument, all of Hovenweep Canyon, and most of the private inholdings in Yellow Jacket Canyon. The attached map depicts the extent of this ownership consolidation.

The consolidation of land ownership influences the requirements of a motorized transportation system. With inholdings no longer in private ownership, motorized routes that only provided access to those inholdings are unnecessary, and they can be removed from the transportation system or restricted only to administrative needs. That weaves together habitat and removes fragmenting activity. 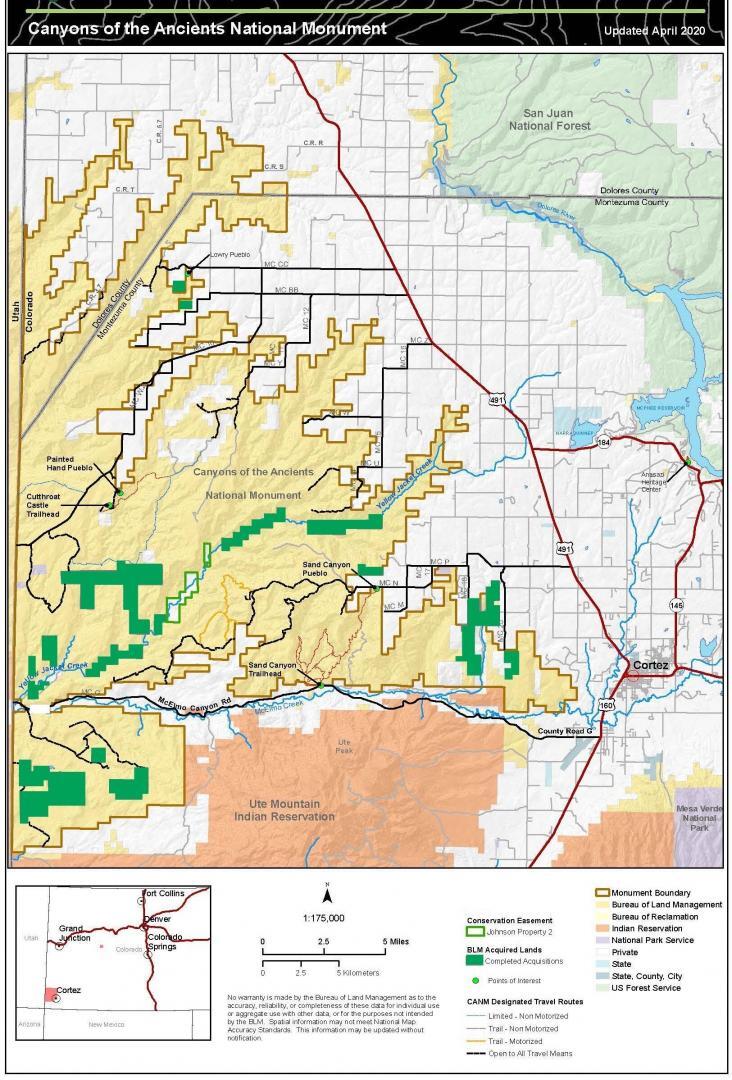 Map of Canyons of the Ancients National Monument land acquisitions since 2000.

One critical element associated with the Monument’s Proclamation is the prohibition on new oil and gas leasing, and hence the consequence that as leases expire, the lands are off-limits to future oil and gas exploration. This has directly led to expiration of oil and gas leases across about 10,000 acres, including nearly all of the southwestern corner of the Monument which is now largely free of leases and won’t be leased again.

Canyons of the Ancients unfortunately is still blanketed by oil and gas leases that cover 80% of the Monument. These date back decades, and are mostly held for production from the massive McElmo Dome carbon dioxide field. That means as long as fluid minerals are extracted from within this field, the leases remain in existence. While it might sound peculiar to drill for carbon dioxide, Kinder Morgan has developed this enormous deposit and extracts it to pipe to the Permian Basin for enhanced recovery from oil fields. Fortunately for the Monument lands, the Leadville limestone formation 8,000-feet underground is very porous, and the CO2 flows easily to well bores. Consequently, the field development has primarily occurred along the periphery of the Monument via existing roads and previously cleared areas. 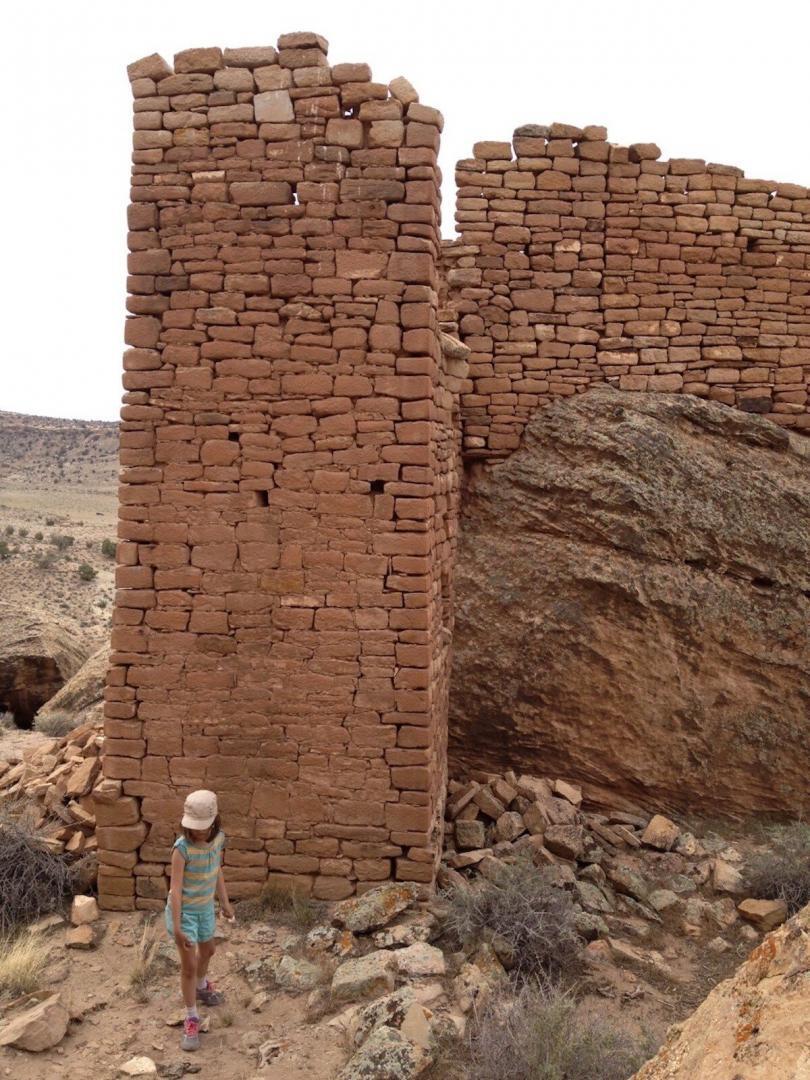 Photo of 1,000-year-old standing walls on one of the acquired private inholdings on Hamilton Mesa. (Photo credit: Mark Pearson)

The combination of travel management planning and inholding acquisitions re-created a landscape unbroken by motorized routes and patchwork land ownership. An inventory today of lands with wilderness character would newly identify large tracts, perhaps 40,000 acres or more in size, largely free of the kinds of motorized routes and human impacts that back in 1980 precluded BLM’s identification of major canyon systems as potential wilderness units in its original wilderness inventory. A large roadless area now spans the heart of the National Monument, encompassing much of the Yellow Jacket-Sandstone-Woods-Hovenweep canyon systems.

Canyons of the Ancients also hosts 25,500 acres of existing Wilderness Study Areas incorporating areas surrounding Cross Canyon. As noted above, at least another 40,000 acres has regained wilderness character owing to land acquisitions and motorized route closures. Thus, as much as one-half of Canyons of the Ancients now persists in a wild and remote condition. The enhanced remoteness is a boon not only for wild nature and primitive recreation, but also provides elevated protection for the region’s rich cultural heritage by virtue of limiting ready motorized access.

San Juan Citizens Alliance is a regional, community-based organization founded in 1986 and advocates for land, river, and wildlife conservation in the San Juan Basin of southwest Colorado and northwest New Mexico. More info on programs and how to offer support is available at www.sanjuancitizens.org. 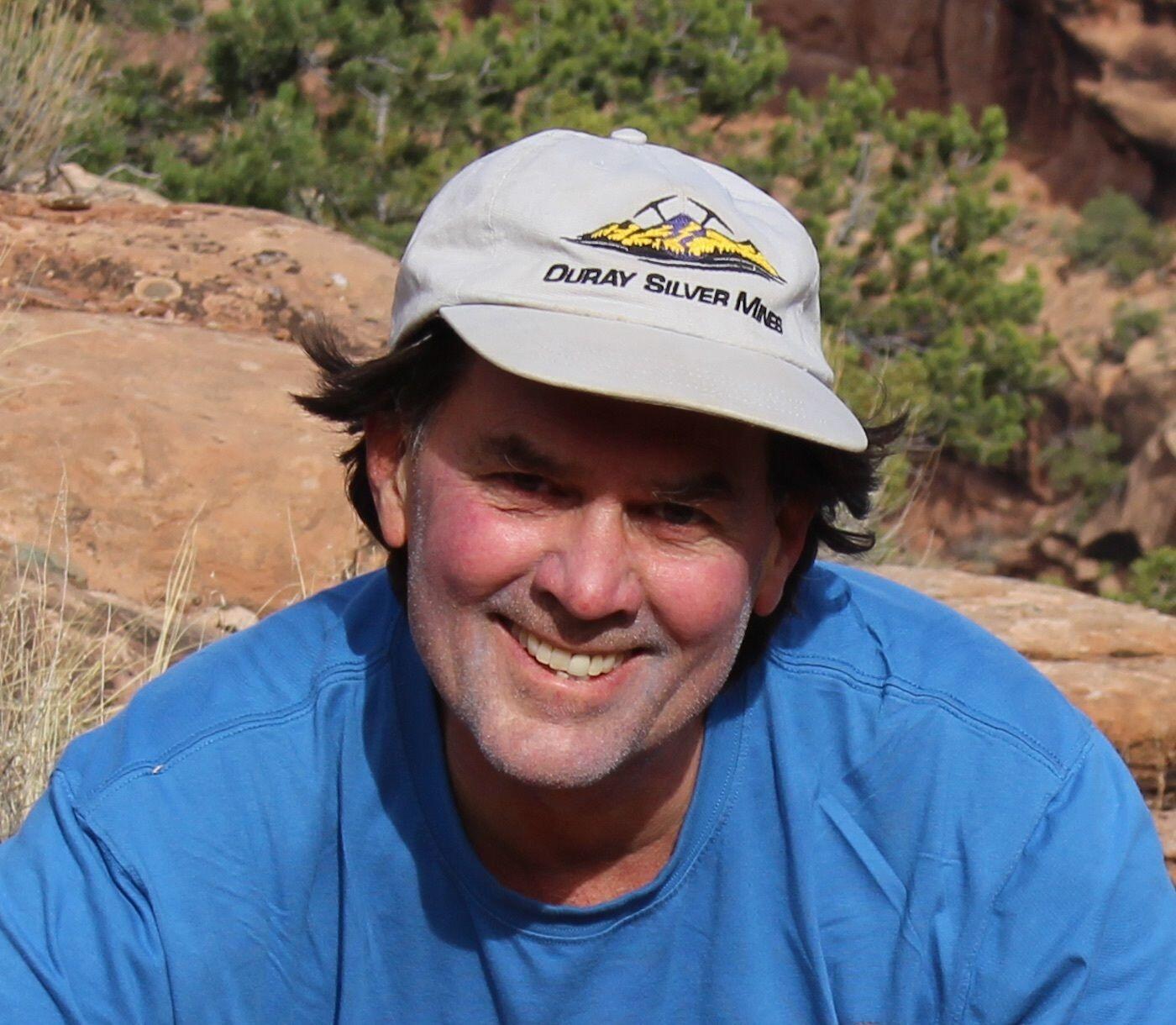 Mark Pearson is a long-time advocate for Colorado’s wilderness, rivers, and public lands, and returned to the role of executive director of San Juan Citizens Alliance in 2017. He first got involved with San Juan Citizens Alliance in 1993 as a volunteer working on forest management and wilderness, leading the effort to craft SJCA’s Citizens Plan for the Wild San Juans that was finalized in 1999. Mark’s volunteer involvement with the Alliance led to a decade-long stint as executive director until departing in 2009. Mark’s heart lies in local, home-grown conservation advocacy and he is excited to tackle the challenges facing the San Juan basin. He has a B.S. in engineering physics from the University of Colorado and a M.S. in natural resource management from Colorado State University.

Certainly good to hear that someplace in the US is taking re-wilding seriously – not to get rid of the rest of the oil & gas disruptions!!