By Richard Grossman on April 2nd, 2019 in Featured, Human Overpopulation vs. Population Stabilization 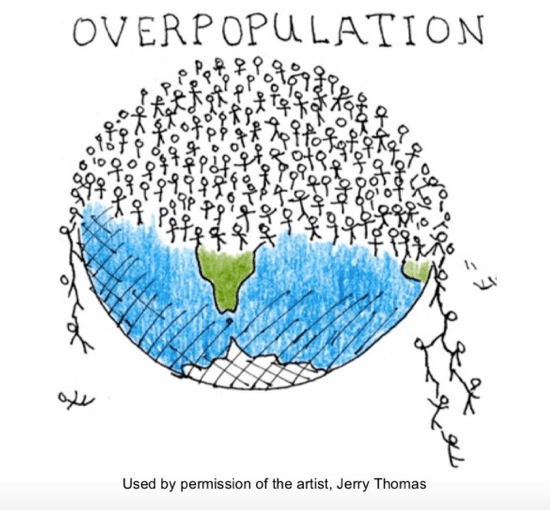 We have had an amazing amount of snow here in Southwest Colorado! It is enough to convince almost anyone of the truth of climate disruption–which, ultimately, is caused by overpopulation.

I am happy that the distribution list for these essays includes people in several countries outside of the USA. Please let your fellow demographers and population activists know about Population Matters!. They can reach me at the address below, richard@population-matters.org. Please remember the hyphen, otherwise your message will end up in England. By the way, the British nonprofit, Population Matters, is excellent. ~ Richard

“Most economic fallacies derive from the tendency to assume that there is a fixed pie, that one party can gain only at the expense of another.”
Milton Friedman

I first met people who denied the population problem in 1994 at the International Conference on Population and Development. They supported their claim that there was no population problem with the statement that all the world’s people could fit into Texas.

Well, they are correct, however there are problems with this contention. If everybody crowded into Texas we would each have almost a thousand square feet! That’s plenty of room, wouldn’t you say?

What about food? Where would food come from, and how would it get distributed to all those people? What about drinking water? How would we stay warm in the winter? And what would happen to all the waste? Clearly people require more than just a thousand square feet.

How much land does each person currently use? The best way of calculating this seems to be the Ecological Footprint. The EF has been calculated for people in many countries, and combines the land needed to live on, grow our food on, the area needed to develop natural resources and also the land to dispose of our waste. It is a comprehensive method of evaluating a person’s impact on Earth, although it does leave out one factor. More about that factor below.

The area of land in square feet, and the world population, are both very large numbers, of course. The EF only includes what is called “bioproductive” land—leaving out mountains and deserts. It turns out that an average citizen of the world is using about 291,000 square feet of land, or about 6 2/3 acres. This is more than 290 times the area allotted if we all squeezed into Texas! The people who deny overpopulation use an argument that is based on drastic misinformation.

Indeed, not only could we all not fit into Texas for any period of time, but also we don’t really fit into Earth. To be sustainable, with our current population and level of consumption, we would need 1.7 times the land area available to us. We have overdrawn on our global savings account in order to enjoy our consumptive lifestyle.

We can already see the effects of overpopulation and overconsumption. Perhaps most evident is climate change. Land is eroding, fisheries are depleted and toxic chemicals are ubiquitous. Furthermore, we are killing off other species at terrifying rates—at least 1000 timesnormal. Although the Ecological Footprint is an excellent tool for comparing what people are using with what is available, it has a major limitation. It does not leave any resources for other species.

I haven’t read the book “Empty Planet: The Shock of Global Population Decline”, but I’ve read reviews. The authors, neither of whom is a demographer, maintain that the world is not overpopulated and, indeed, needs more people. They are concerned that the birth rate is falling more rapidly than the UN and other demographers realize. I wish they were correct, but I disagree!

The Wall Street Journal review of the book uses the term “global population collapse”—but there is little reason to believe that this will happen this century; we’re still adding 80 million people to the planet each year. The review is concerned that the growth of the economy will slow. Only a madman or an economist can believe that perpetual economic growth is possible.

What is wrong with this book? There seem to be many errors. The authors don’t focus on subSaharan Africa, where the average woman still has almost 5 children, and parents want large families. The authors seem to ignore demographic momentum, which causes growth to continue for several decades even after a country reaches replacement family size.

The major problem with “Empty Planet” is that nowhere (in reviews I’ve read) do the authors compare the resources we humans are using with what is available. The Ecological Footprint does that, and the result is not pretty. Unfortunately that book is not alone in not considering the finiteness of our planet. Even though Milton Friedman won a Nobel Prize for economics, he was not thinking globally when he wrote the quote at the beginning of this column. Our global “pie” is fixed in size. We in rich countries are endangering people in other countries with our growing population and extravagant lifestyle. We are also endangering our progeny.