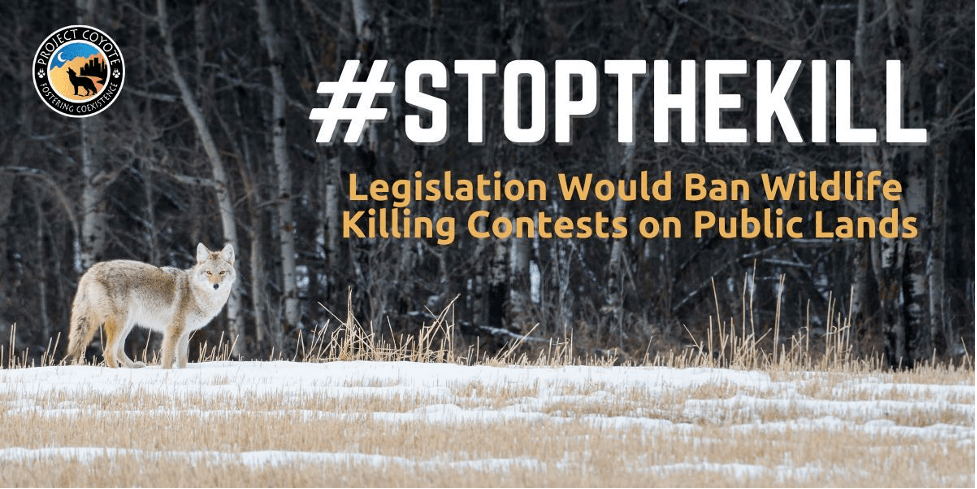 Today, more than 15 members of Congress introduced legislation that would prohibit organizing, sponsoring, conducting, or participating in wildlife killing contests on more than 500 million acres of U.S. public lands.

Wildlife killing contests are organized competitive events in which participants compete for cash or prizes by killing the most, the largest, or sometimes the smallest animals over a certain time period. Each year thousands of important native carnivores and other wildlife — including coyotes, foxes, bobcats, mountain lions, prairie dogs and even wolves — are killed during these competitions.

“Most people are shocked to learn that wildlife killing contests are legal on our public lands,” said Camilla Fox, executive director of Project Coyote. “Killing animals for prizes and entertainment is ethically indefensible, ecologically reckless and anathema to sound wildlife conservation and management.”

Project Coyote is proud to stand in coalition with the more than 50 organizations comprising the National Coalition to End Wildlife Killing Contests.

“It’s time for us to end the mass slaughter contests of America’s wild carnivores once and for all,” said Stephanie Kurose, a senior policy specialist at the Center for Biological Diversity. “The senseless killing of our most persecuted wildlife on public lands should have never been allowed. Congress should pass this legislation quickly so we can finally spare our native animals from these ruthless kill-fests.”

“Wildlife killing contests are cruel events that have no place in modern civil society,” said Johanna Hamburger, director and senior staff attorney for the Animal Welfare Institute’s terrestrial wildlife program. “Participants frequently violate fundamental hunting principles of fair chase by using bait and electronic calling devices to maximize the likelihood of winning, and the animal carcasses are usually dumped after the event.”

“A closer look makes it pretty clear that these bloodbaths constitute neither wildlife management nor sport,” said Tracie Letterman, vice president of federal affairs for the Humane Society Legislative Fund. “Killing contests aren’t merely retrograde cruelty, either. They destroy native carnivores like coyotes, who play a vital role in ensuring the health of forest and pastoral ecosystems. Now, thanks to Representative Steve Cohen’s leadership, we have a chance to do something about it.”

Project Coyote, a national non-profit organization, is a North American coalition of scientists, educators, and citizen leaders promoting compassionate conservation and coexistence between people and wildlife through education, science and advocacy. Visit ProjectCoyote.org for more information.

The Animal Welfare Institute (www.awionline.org) is a nonprofit charitable organization founded in 1951 and dedicated to reducing animal suffering caused by people. AWI engages policymakers, scientists, industry, and the public to achieve better treatment of animals everywhere – in the laboratory, on the farm, in commerce, at home, and in the wild. Follow us on Facebook, Twitter and Instagram for updates and other important animal protection news.

The Humane Society Legislative Fund is a social welfare organization incorporated under section 501(c)(4) of the Internal Revenue Code and formed in 2004 as a separate lobbying affiliate of The Humane Society of the United States. The HSLF works to pass animal protection laws at the state and federal level, to educate the public about animal protection issues, and to support humane candidates for office. Visit us on all our channels: on the web at hslf.org, on our blog at hslf.org/blog, on Facebook at facebook.com/humanelegislation and on Twitter at twitter.com/HSLegFund.

Each year, thousands of coyotes, foxes, bobcats, prairie dogs, crows, and even wolves are targeted in “wildlife killing contests” where contestants win prizes and awards for killing the most or largest of a given species. These contests, largely unmonitored by state and federal wildlife agencies, are legal throughout the United States and often occur on our public lands.

“Congress Introduces Legislation” to allow Wildlife Killing Contests anywhere except on Public Lands? How quaint of U.S. Congress & may long live what’s left of United States wildlife on public lands continuing to be persecuted, w/ the exception of contests.