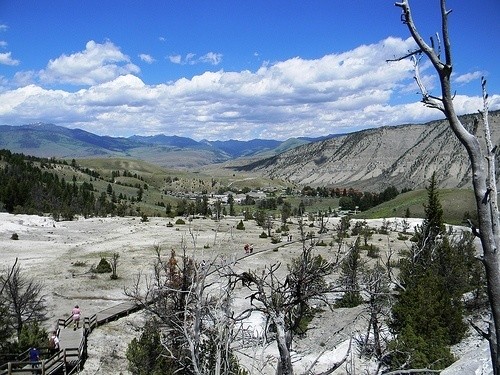 Following is an excerpt from the second topic, “A Monster at Mammoth”.

Mammoth Hot Springs, on a good driving day just 20 minutes south of Gardiner, is of course home to the geothermal extravaganza from which it takes it name. It is also home to historical but still limited infrastructure built to allow humans to enjoy these exceptional natural features; there are roughly 678 “pillows” in Mammoth, and occupancy is very high in the May to September season.  The town is also home to Park administration and staff living and working space, and to concessionaire staff accommodation. Almost 400 concession employees, plus Park staff, are concentrated here from May to October, fewer outside that period. What this creates, on any given day during peak season, is a mass of close to 1200 people essentially living and working in this National Park town. Add to this as many as 3500 people per day entering from the Gardiner entrance alone, and “congestion” is a seriously inadequate definition of the state of affairs.

Mammoth is also an amazing place from a human and wildlife interaction perspective, particularly in spring and fall, and I often sit and watch the goings on there, at times almost in disbelief.  A male bison weighing well over half a ton, with a toss of his head and a stutter step, shooing off part of an ever growing contingent of Asian tourists as they naively crowd his space; Elk stepping between cars in a never ending flow of vehicles,  “freezing” traffic, pooping on the sidewalks, resting in the shade of the post office; a large male elk in full rutting regalia, taking out the grill on a jeep whose driver treated the animal with contempt, as an ever growing number of drivers do, all of these mobilizing a sometimes frantic Ranger (or 2 or 3) and /or commanding the attention of volunteers and concession staff trying to give them space and protect people from, well, themselves! Truly amazing!

As entertaining as this is on the surface, there is also a very dark side to Mammoth. This historical site is threatening to burst its human and ecological seams and push this complex into an unmanageable and severely degraded human and environmental state. Along with Park Service and concession staff, thousands of humans clog the area daily from May to October. To put it nicely, the place is ecologically and socially maxed out!

While there still persists in the immediate area a local sub population of elk, bison, mule deer, and even the occasional grizzly bear preying on an elk calf in spring, what most visitors do not understand is the animals they can virtually reach out and touch number but a tiny minority of the parks population; they are the super tolerant, the habituated. To the untrained eye they look, and mostly behave, as though they are “tame”, yet they are behavioral chameleons, not to be mistaken for the vast majority of the remainder of the Parks wildlife! And not even to be mistaken for themselves at other times of the year, and in other parts of the Park, where circumstances demand they revert to more normal behavior if they expect to survive. Further, they are at Mammoth largely because they are drawn there by artificial circumstances, lured by manicured lawns and the readily accessible nutritious green grass that make these artificial habitats stand out in a sea of relatively dry native sagebrush and grasses. And strange as it may seem, some are there because they seek a degree of security from natural threats that are fended off by swarms of humans.

This highly artificial situation presents tens of thousands of Americans and foreign visitors with a completely erroneous, misleading, inaccurate, and it could be argued, dishonest view and understanding of the relationship between wildlife and industrial development. There is no doubt most visitors are entertained, even thrilled, by the bison and elk they see up close in May-June and September-October. But many take away, from their brief, largely uninformed experience at Mammoth,  a jaded message of what bison and elk are and how they relate not only to the vast majority of animals in the Park, but also to the industrialized habitats that now constitute the vast majority of America, including the Mammoth hotel complex. They watch, with a hundred other humans, as elk “nonchalantly” breed outside the visitors center, and they burn up video cards filming bison on the lawn just yards from the dining room.  To many of these visitors, without even a local let alone a regional perspective, what they “know” of wildlife comes from their experiences at Mammoth. Elk and bison monitors, volunteers and concessioner employees trying to keep some physical and behavioral order between humans and wildlife, do try to inform some visitors, but the contact is fragmented and reaches a relative few. And it is notable that the Park Service does not run a full time, intensive interpretive program in spring and fall even though it has a “captive” audience. We can label this as a huge opportunity lost, or we can term it a major failure!

It is, and should be, a given that Parks are meant to be different – so far Yellowstone doesn’t, for example, allow hunting, oil and gas drilling, logging or wheeled vehicles on trails, whether they be motorized quads or mountain bikes. Protecting landscapes from these industrial and mechanical threats is what most Americans believe Parks are meant to do. A consequence of this century long purpose and design is that visitors have wildlife and social experience opportunities (amongst a range of other natural landscape opportunities) in Yellowstone that are increasingly rare. But historical, traditional and legal intentions can easily get blurred by management manipulation.

What message do visitors take home from their Yellowstone experience: a new-found or reinforced respect and value for wildlife, and even more so, how many translate that into pro-park activism and involvement, even if just in the form of a letter or phone call to their congress person or the Park Superintendent? Obviously, if even some do, that would be a strong upside.

If Yellowstone management succeeds in making Mammoth a Monster by driving up both visitor and employees housing numbers, as is now in an advanced proposal stage, the Mammoth wildlife experience can readily turn ugly. It now rests on a threshold beyond which it will degenerate quickly into the abusive practices of heavy handed wildlife control and selective killing perpetrated by Park Staff, precisely like that which characterizes, for example, the blatant domination of commercialism over visitor wildlife interaction in Banff National Park in Alberta, or even the anti bison agenda of special interests, acting in close collaboration with the Park Service, on Yellowstone’s boundary in Montana and Idaho. Mammoth appears today to be teetering on the artificial, often management-concocted, fine line between too many people and too many elk wherein the same number of elk now at Mammoth, continuing the same behavior, can easily derail into “too many elk” as human numbers escalate and human – elk interaction becomes a management liability.

I don’t know if Americans will prevent this deterioration at Mammoth or not, but there is no question that what is being proposed for Mammoth would herald a defeat for the conservation ethic and standards that have taken over a century to establish themselves in Yellowstone.