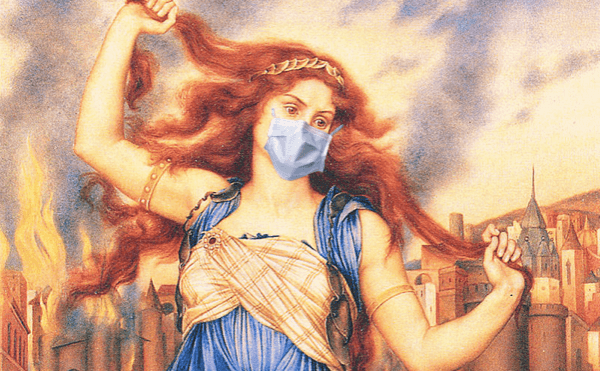 Crown of All Crises?

The possibility seems real that our society is entering a perfect storm of crises: Worst of all, with human numbers (in terms of population and consumption) continuing to swell, the overarching crisis of our time – extinction – accelerates; and its close correlate, the climate crisis, approaches thresholds past which return is not possible in our grandchildren’s lifetimes. Compounding these existential threats are the ascension to power of narcissists and demagogs who deny science, subvert truth, and feed people’s fears of change. Now we add a deadly virus, seemingly tied to horrific live animal markets and the dangerous and unethical trafficking of wildlife.

Whatever the cause of the corona virus, its consequences may mean shipwreck for the global industrial economy we’ve, for several human generations now, taken for granted. At the very least, a pandemic scare will force some of us to postpone meetings, enact austerity measures, and focus our energy near home.

Home for those of us in the Rewilding tribe of the larger conservation community, though, includes the wild places we love. As we contemplate the possible breakdown of the institutions that run modern affairs, we need to think about how to ensure the well-being of the wild places and creatures to whom we’ve devoted our lives.

To this end, Rewilding Earth is finally launching a plate that we began discussing years ago. At our founder Dave Foreman’s urging, we name it simply Cassandra, in honor of the heroine of Greek mythology who tried, mostly in vain, to warn her people of the impending attack of the Trojans. In this Cassandra plate (‘plate’ as in tectonic), we invite essays and musings on how to help wild Nature survive, and hopefully even thrive, through the likely coming chaos, or the “long emergency” as catastrophist author James Howard Kunstler has aptly called it. How do we help assure that National Parks and Wilderness Areas and land trust holdings, for instance, remain intact? How do we uphold the Endangered Species Act if the federal government has lost all credibility? How do we keep alive the Mexican Wolf recovery program if the federal government declares martial law, or do we just trust Lobos to prosper on their own, if subsidies for livestock grazing on public lands end? How do we achieve the Nature needs at least half goal if most people are too busy just trying to stay alive to even think about designating new protected areas. How do we complete continental wildways if communication systems are breaking down?

This Cassandra plate joins our emerging Eco-Fiction plate, which is where we share imaginative rewilding stories (such as Ken Swift’s Catrunners chapters). The Eco-Fiction section also offers a place to use stories to help bring about a wilder, better future for life on Earth.

Perhaps the above questions and warnings are premature. Perhaps within months, the mysterious crown-shaped virus will be contained and things will return to “normal”. Even if so, we do well as a conservation community to be prepared to uphold wildlife and wildland protections with or without government support. We do well to imagine how to turn crises into opportunities for rewilding Earth.

Please send us your thoughts on how to assure expanding wild places for birds and bears, salamanders and salmon, great cats and tiny bats, massive trees and winsome flowers, long into the future. Serious essays will go in our Cassandra plate; imaginative rewilding scenarios will find a home on our Eco-Fiction plate.