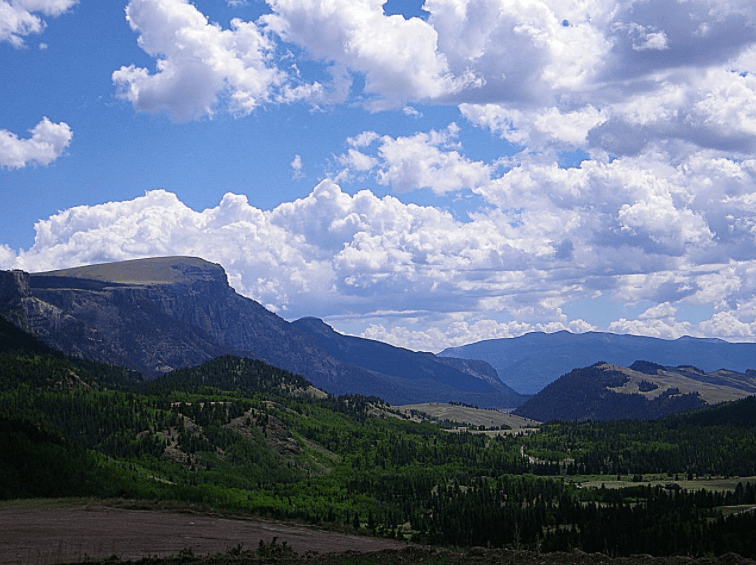 As the book review editor of Rewilding Earth – more accurately the book reviewer for the site over the past couple of years, I’m exercising some discretion here to alert readers to a book a bit outside the usual works reviewed that focus on rewilding. As responses to the coronavirus continue, we have time to read and need cause for hope. Deep Creek is a moving and hopeful book that is just what we need in such a time. The writing is so good that while some of Houston’s story is sad and troubling, reading her prose is a great pleasure and her message is heartening.

Deep Creek is a series of essays, part memoir, and part stories about the land and her relationship to it. After a childhood fraught with abuse and trauma and a young adulthood of adventure and search, she finds a ranch near Creede, Colorado that captures her, and which she wants to buy but lacks the resources to do so. The landowner is a most generous and trusting woman who tells Pam that she’ll sell the place and carry the mortgage for 5% down and a signed copy of her first book Cowboys Are My Weakness. She moves into the old ranch at 9,000’ with her Irish wolfhounds, horses, donkeys, sheep, chickens, and a feral cat. The story of her love affair with this place begins.

Houston writes that she had “always taken the greatest comfort in being surrounded by wild things” so “it is no wonder, then,” the ranch “opened my heart like a tin can.”

A place with so little light pollution the Milky Way is truly milky. The big mountains – Bristol Head, Red Mountain, Copper Ridge, and Baldy – hold me in place, the gramma grass dancing in great undulating swatches, the aspens quaking their comfort, the creek and the coyotes combining for a lullaby, the big sky whether full of stars, sunshine or snowflakes is always watching over me.

Life up there in a high, often cold, remote corner of Colorado can be hard, but the people are kind and helpful, coming to her aid in the myriad ways a neophyte “rancher” like her needs. Deep Creek is very much about Houston healing from very deep wounds of childhood and the role the land and her animals as well as her friends and neighbors play in that healing. It is also about what we humans are doing to Earth and the need for healing there. 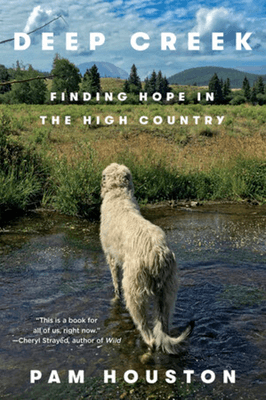 In her concluding chapter, Houston says that in the five years it took her to write Deep Creek she “started writing toward an answer to the question I wake up with every morning and go to bed with every night. How do I find hope in on a dying planet, and if there is no hope to be found, how do I live in its absence?” Her answer to this question familiar to all of us conservationists can only be found in reading the entire book. Part of it is found in her encounters with wild creatures like elk, whales, a Kermode bear, a manatee, narwhals, and with her domesticated animals on the ranch. Part is found in encounters with kind friends and neighbors. Yet more in surviving the West Fork Complex wildfire that nearly consumed her beloved ranch in 2013 but ultimately spared it, and the resilience of nature she finds in her wild neighborhood after this huge fire. She writes “Where there is life, there is hope, a veterinarian I loved for the way he loved my dog once told me. By which he meant, as long as we are living, there is always time to expand the story.”

There is this serious philosophical side of the book, but then there are the stories about people, places, and animals, told with such emotion, humor, and insight that some nearly moved me to tears and others made me chuckle. She inserts throughout the book a “Ranch Almanac,” titles of which include “Donkey Chasing,” “Born in a Barn,” “Lambing,” and “Wooly Nelson,” among many others. Wooley Nelson, for instance, is a 200-pound Islandic sheep ram whose horns grow in rather than out, threatening his eyes and requiring drastic action. Pam’s housesitter Kyle wrestles Wooly into the back of her 4Runner and sits on him until they reach the vet’s place.

Doc’s assistant, Sam, greeted me at the office door.
“You have a goat in the back of that car, Pam?” she asked.
“That’s Wooly Nelson,” I said. He’s an Icelandic sheep.
“And who’s his sidekick?” she asked.
“That’s Kyle,” I said. “New housesitter. Steep learning curve.”
“Bring him around to the side, Pam,” Doc said, so I backed around and after checking with Kyle to see if he was ready – “more than,” he said – Emma dropped the rope and we opened the hatch and Wooly and Kyle tumbled out.

The operation is successful, and this gives you an example of how Houston can tell a story. She draws one in, adding just the details needed to make the reader feel as though they were there with Kyle and Wooly and the rest.

The longest and most powerful piece in the book is titled “Diary of a Fire” and recounts the progression of the West Fork Complex wildfire of 2013. To make a living, Houston must leave the ranch for various periods to teach and promote her books, and though the wildfire grows toward her ranch, she must leave to teach in Aspen, Oregon, and California. She checks in regularly with her ranchsitter Greg as the fire moves inexorably north toward the ranch, ultimately growing to 110,028 acres, almost 172 square miles of forest and meadow and even alpine tundra. It roars through thousands of acres of beetle-killed forest driven by gale-force winds. Day after day are “Red Flag Warning” days, “A designation put in place by the National Weather Service to alert land management agencies about the onset of critical weather and fuel moisture conditions that could lead to rapid or dramatic increases in wildlife activity (USDA Forest Service Fire Terminology). Houston builds suspense into the story even though we think we know the ranch somehow survived. She returns as the fire grows near, and her descriptions are powerful. Her account is partly a primer on wildfire terminology and behavior while being a very personal story of people coping with such a natural event (the temptation here is to write “disaster” but that is not how she, or I, see such events caused directly by lightning, and indirectly by anthropogenic global climate change).

There will be many more fires in Colorado in my lifetime. And floods and droughts and every other outcome of climate change, every consequence of how carelessly we have treated – and how carelessly we continue to treat – this planet that is our home. But I have a different relationship to fire now, which is at least equal parts fear and knowledge. Scary as it was, there wasn’t a single day of the West Fork Fire that wasn’t deeply interesting. And because I have studied the fire as if I were about to take a preliminary examination in it, I will never be afraid in the same way again.

Knowledge is power, she is saying, though it may be power only over oneself. Later she says that writing Deep Creek, with the knowledge that nature bats last, “has been an effort to write my way to an understanding of how to be alive in the meantime, in the final days, if not of the earth, then at least of the earth as I’ve known her. Because it is only in knowing her that I’ve come to know myself.”

Traveling the Inside Passage of the coast of British Columbia, worrying about a sick dog and humpback whales that seem to observers too thin, she reflects that she is “in a place both radically pristine and radically threatened, by Big Timber, by tar sands, by liquified natural gas.” What will happen if a gas pipeline punches through to this coastline, requiring many huge tankers to traverse the narrow confines of the Passage with the threat of one navigational error spilling two million barrels of oil that “could poison this slice of heaven forever.” Can she “know all that and still be here with my heart open? Could,” she asks herself, “a person mourn and be joyful simultaneously? I understood it as the challenge of the twenty-first century. Maybe it was simply what being a grown-up meant.”

In 2014, on a cruise near Baffin Island in the Arctic, she sees an iceberg, a part of the Greenland ice sheet, the largest piece of the sheet to break off up until then. She again faces her “familiar koan: how to be with the incandescent beauty of the iceberg without grieving the loss of polar bear habitat its appearance implied.” Later, the ship encounters a rare sight, an annual migration of six to eight hundred narwhals, and they run beside them for hours. She feels “perfectly cared for” and joyful.

How many nights had the ocean rocked me to sleep? How many times had I lain on the ground and felt its sustenance? How many times had I turned my face to the sky and borrowed its power? I had been born to two humans who wanted me not at all, but maybe that didn’t matter so much. I would always be a child of the wilderness.

This is a wonderful book, about self-knowledge and many other things. Do read it. You will be moved, inspired, and motivated to forge onward with conservation work in the face of many challenges and discouragements. Pam Houston has, in her life, provided an example of how to do just that with love, compassion, and determination.