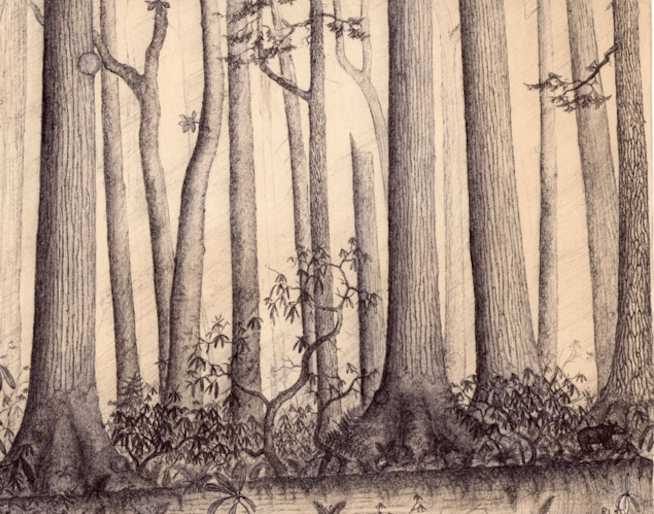 Eastern Old-Growth Forests Then and Now

Following several old-growth forest discoveries in western Massachusetts in the late 1980s and early 1990s, I became involved with Wild Earth magazine to search for and report on old-growth remnants in the eastern United States. It was an unlikely role for me, given my unrelated educational path (engineering), but my son Rob and I were finding little pieces of the pre-settlement landscape that were supposed to have disappeared by the middle 1800s. The experts had missed them for lack of a proper search image for old growth in New England, yet there they were, in front of our unbelieving eyes. So, in the spring of 1988, Rob put his budding artist talents to work, and I, with pen in hand, wrote an article for the Woodland Steward publication of the Massachusetts Forestry Association. The title was something like “Old-Growth Forests in the Cold River and Deerfield River Gorges.” The rest is history.

As an outgrowth of Rob’s and my discoveries, in 1993 I helped organize the first of a series of eastern old-growth conferences that brought together scientists, forest managers, and environmentalists to explore challenges to the identification and preservation of the East’s remaining old growth. We called the gatherings the Ancient Eastern Forest Conference Series. Altogether, we held 10 events, and it was at them that I had the privilege and honor of meeting many distinguished scientists who became my mentors. During that golden era, old-growth discoveries mounted, often in places that had been thoroughly explored.

One of the geographical areas that was supposed to have been ravaged by the loggers was the Adirondack Mountains of upstate New York. To the surprise of forest historians of the region, though large areas were cut, a substantial acreage of old growth survived. The Adirondack forests were best chronicled by the late Dr. Barbara McMartin, who, in the 1990s, thoroughly researched their logging history. As a result of Dr. McMartin’s work, we are confident that several hundred thousand acres have survived. The exact amount is not known, but it is somewhere between 300,000 and 500,000 acres – the largest old-growth reserves in the East. Following McMartin, Dr. Michael Kudish has taken on the role of the old-growth forest expert of Adirondack Park (and of New York’s smaller and more southerly Catskill Park).

In the Adirondacks, the Great Smoky Mountains, Big Reed Pond (Maine), or any of the other old-growth remnants spread from Florida to Maine, and westward to Minnesota, there is an ineffable mystery and magic. Shafts of light penetrating a tall canopy of moss-covered trunks, and illuminating a dense carpet of herbaceous plants below, are suggestive of a world inhabited by hobbits and elves.

Forestry texts had been written decades ago on the successional trajectory of forests from early development to old-growth status. Forest succession models typically start with the simple structure of young forests and follow the process into the increasingly complex ones typical of old growth. However, these models mostly concentrate on the trees, their ages, and sizes, as opposed to the aggregate ecosystem with all its many species and processes playing out on different time scales. The traditional storyline that emerged from the early models was one of increasing senescence as tree age progressed beyond economic maturity. As a consequence, timber interests have long promoted the notion that old forests are unproductive and disease ridden, although they are more cautious these days with their use of pejorative terms. Today, they often justify harvesting of mature trees by lauding species that thrive in early successional habitat. 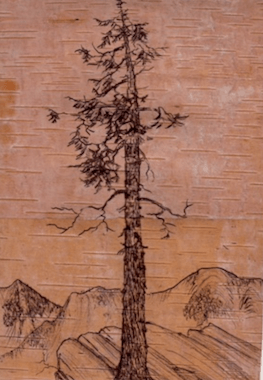 However, we now know a lot more about old-growth ecosystems than we did in the 1980s and 1990s. We are coming to understand the complex web of life beneath the ground that connects the trees of the same and different species in supportive relationships. The simplistic picture of how forest systems work, promoted by the timber interests, is finally being challenged in mounting scholarly studies.

If this is the good news, there is also the bad. In recent years our old-growth forests have been assaulted by invasive plants and animals, forest pathogens, drought, hurricanes, and of course, the ever-present threat of development. The hemlock woolly adelgid, emerald ash borer, Asian longhorn beetle, gypsy moth, southern pine beetle, and other pests are hammering our forests. The older trees may be at a disadvantage in this war of insect pests and fungal assassins, but it is not yet clear when a tree’s defenses are at their strongest.

As if the above threats weren’t enough, a new one has emerged to impact forests, young and old. The new threat has been growing for a decade or more – the ugly specter of biomass harvesting for generating heat and electricity by burning wood. This insidious practice has been declared carbon neutral by politicians who fall prey to the green-sounding talking points of the timber and wood products interests. Let’s be honest. Biomass harvesting is NOT carbon neutral. 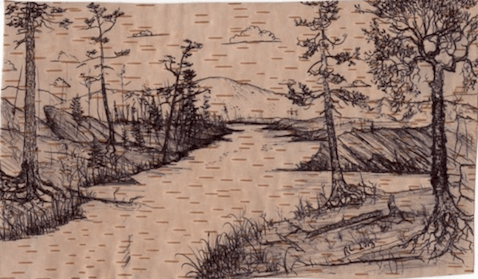 One of the most challenging debates today involving our old-growth and mature second-growth forests falls in the climate change arena. For years foresters have maintained that young forests grow faster and therefore sequester more carbon than their older counterparts, which are often depicted as geriatric by age 100. However, recent studies have been turning this self-serving belief of the timber interests on its head. It now appears that the larger, older trees are doing the lion’s share of the work.

As for my role, I’ve been measuring trees with serious intent since the early 1990s, and have managed to position myself on the leading edge of field-based tree-measuring techniques. Over the past year, I’ve been busy developing charts, tables, and graphs showing how trees in the areas I visit acquire their carbon reserves over time. The following table provides a look at a charismatic species, the eastern white pine. The tree being profiled below exemplifies over a dozen that I routinely measure in western Massachusetts.

I won’t go into an explanation of how the above numbers were derived, but they tell the story of the gain in volume in this hypothetical pine’s trunk from seedling to an age of 200 years. These volumes can be translated into elemental carbon and the equivalent in terms of CO2. So, where’s the controversy? Lumbermen will likely point to the last column in making their argument that the pine’s fast growth occurs in the first 50 years. An increase in volume of 807% from age 25 to age 50 is hard to argue with. Doesn’t that prove their case? Not really. Look at the column entitled ‘Absolute gain during period – ft3’. The largest 50-year volume gain is between 100 and 150 years, and even the gain between 150 and 200 years is over twice what it was in the first 50 years. It is the absolute gains that make the climatic difference. 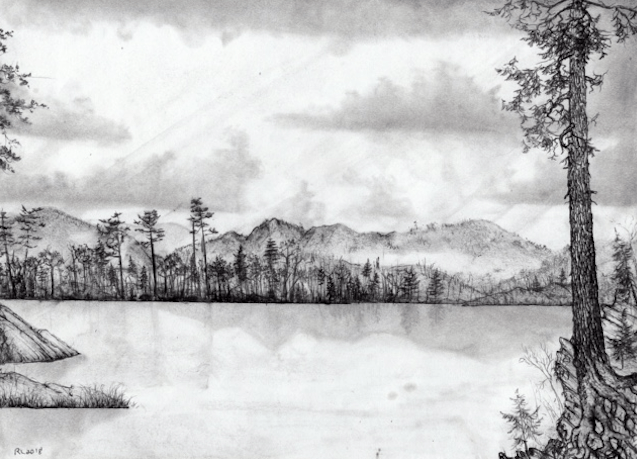 This crucially important lesson about how growth occurs is lost if we just focus on percentage growth data. What they ignore is that a large percent of a very small number can still be a small number. The big pines are the ones possessing a large surface area of needles, which is where the photosynthesis takes place.

It is hard for most people, amateur and professional alike, to judge growth for a very large trunk. What appears to be an insignificant addition at breast height, when spread over a large form, becomes significant.

In an era of rapid climate change, the future of eastern old growth is unclear, but there is no disputing its historical importance to species diversity, climate mitigation, and the human spirit. Old-growth forest deserves our best efforts to preserve it and make a pathway to allowing currently mature regrowth forests to become future old growth.

Suggested readings on old-growth forest in the eastern US 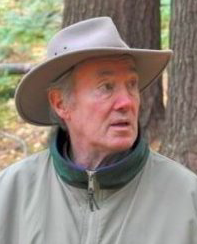 Robert T. Leverett (Bob) is a co-founder of the Native Tree Society, principal organizer of the Ancient Eastern Forest Conference Series, and senior advisor to American Forests Champion Tree Program. Bob was a regular contributor to the original Wild Earth Publication. He is also a co-author of “The Sierra Club Guide to Ancient Forests of the Northeast.”  Today he is heavily involved in measuring trees to quantify their stored carbon and rates of sequestration. He is a coauthor of two scientific papers on the subject, one published and one pending. With his wife, classical music pianist Monica Jakuc Leverett, he is working on a book about his forest mecca, Mohawk Trail State Forest in western Massachusetts.

While the carbon sequestration of the tree’s trunk (wood) is examined in this article, the carbon holding capacity of the soil below the tree was neglected. Soil depth and stability is an even greater measure of carbon sequestration, as wood decompostion returns carbon to the atmo. Of course if the wood is burried deep underground, or stands as a frame house that doesn’t rot…that would sequester carbon as well, but still the soil be neglected here.