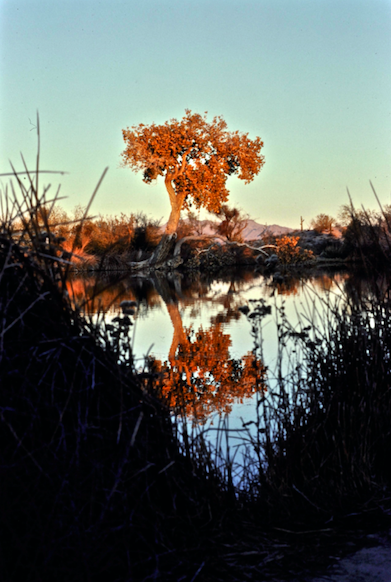 Embers from the Campfire, #1

One of my most treasured places in Organ Pipe Cactus National Monument is Quitobaquito Springs, pictured above at dusk. This exquisite oasis is now threatened, along with two dozen other archaeological sites in Arizona.

They are in the path of Trump’s proposed border wall, the goal of which is to completely wall off the entire Monument from north-south migration. As I write this, large machinery is trashing essential habitat, and if finished, the wall would essentially split one of the finest Sonoran ecosystems in half. Organ Pipe Cactus National Monument and adjacent protected areas in Mexico are home to threatened and endangered species. Trump’s politically motivated, unnecessary wall would prevent all terrestrial species from migrating across the border and also prevent the Tohono O’odham from moving through their historical homelands, among other atrocities.

Quitobaquito is an oasis, the primary source of water for animals and birds in the region. DHS is drilling wells every five miles in an area where drawdown of ground water is already a serious threat. If completed, the wall would require an estimated 28 million gallons of water to build concrete footers to support 30-foot panels, leaving a monstrous obstruction, destroyed habitat, and little or no water.

If my health were better, I would be there today protesting this ill-conceived, terrible, and illegal destruction. We must find some way to stop this crime against nature and our public lands.