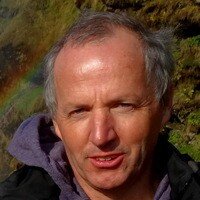 Dr. Jan van Boeckel is a Dutch anthropologist, visual artist, art teacher and filmmaker. One of Jan’s areas of interest and concern are the worldviews and environmental philosophies of indigenous peoples. Together with filmmaking group ReRun Productions, he produced a series of documentaries on this subject, as well as films on philosophers such as Jacques Ellul and Arne Naess, who provide a critical analysis of the Western way of life. Principal among these films is “The Call of the Mountain,” (watch below) focused on Naess’ work on the topic of Deep Ecology.

In 2013 Jan defended his doctoral thesis At the Heart of Art and Earth: An Exploration of Practices in Arts-Based Environmental Education at Aalto University.  From 2015 until 2018, Jan was Professor in Art Pedagogy and Didactics of Art at the Estonian Academy of Arts in Tallinn.

Watch “Call of the Mountain”

1. The well-being and flourishing of human and nonhuman life on Earth have value in themselves (synonyms: inherent worth, intrinsic value, inherent value). These values are independent of the usefulness of the nonhuman world for human purposes.

2. Richness and diversity of life forms contribute to the realization of these values and are also values in themselves.

3. Humans have no right to reduce this richness and diversity except to satisfy vital needs.

4. Present human interference with the nonhuman world is excessive, and the situation is rapidly worsening.

6. Policies must therefore be changed. The changes in policies affect basic economic, technological, and ideological structures. The resulting state of affairs will be deeply different from the present.

7. The ideological change is mainly that of appreciating life quality (dwelling in situations of inherent worth) rather than adhering to an increasingly higher standard of living. There will be a profound awareness of the difference between big and great.

8. Those who subscribe to the foregoing points have an obligation directly or indirectly to participate in the attempt to implement the necessary changes.

Life is sensory reality. It is meetings of individuals.
One day, I carried a large dragonfly on my chest, sheltering it for several miles until reaching bushes protecting from the cold exposed wind, where it transferred its shelter.
Other common encounters occur. Such “realization” is natural, essential each day, each night.
The language of the film is social, hierarchical dissociated from individual encounter.

Mysticism is ancient, native to all. To frame it as transcendent, separate from individuals, whether of bison or deer or wolf, coyote, raven , or slug or hummingbird who chose to encounter, is the gravest error. The language and solipsistic evaluation of the rhetoric I hear from the humans interviewed is distressing( the word means pulling hair out!).

While having ecology in my own education, whether lifting a Mojave tortoise or waking a cold morning snake from a desert road dangerous to them, lended grounding of ecology and its quantitative measurements.
Such dissociation I hear in this video, is the dissociation of “getting somewhere” over a sensory ignoring of their, and other, lives.

Anthropocentrism is excess, and I would encourage those interviewed to recognize that the mystery of being can only be answered IN mortality, rather than through imagined religion or dissociated philosophies.

What wisdom can be found, directly emanates from those meetings you have had, and will. The sprouting of a plant, or of an ancient redwood 10 meters to me right, following a cruel cutting to a stump, naturally putting forth new shoots. These speakers are very like those they call shallow.
Recognition of true others, for example of the octopus with whom I played as child, whose forebears separated from ours well over half a billion years ago, might be a better goal for the philosophers so centered on their over estimation of validity of their own, over the slugs I watch consuming detritus, or the dead fish thrown away as netted “by catch” down in the bay.

Each organism feels their OWN validity, though it may not be apparent to those who do not prioritize the senses through which our brains quite automatically signal that previous errors and presumptions need ever-new correction to correspond with the signaling of EACH other life of its experience, not qualitatively differing from our own.

No deities, vagaries, or blind, unexamined heuristics are necessary; intact, such heuristic dissociation appears to be the problem, inadvertently exposed in the dissociation communication of the interviewees.
I once took the landing of the suswecha, the dragonfly, on my chest, to heart. I am sure that many times in those elder lives, the interviewees had had such revelations, far more profound than any self-serving interpretive philosophies.