Episode 6: John Davis On Rewilding In The Northeast 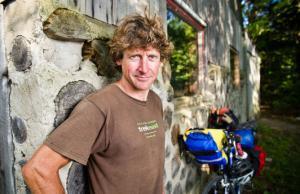 John Davis is executive director of The Rewilding Institute and editor of Rewilding Earth. For Rewilding, he serves as a wildways scout, editor, interviewer, and writer. He rounds out his living with conservation field work, particularly within New York’s Adirondack Park, where he lives. John serves on boards of RESTORE: The North Woods, Eddy Foundation, Champlain Area Trails, Cougar Rewilding Foundation, and Algonquin to Adirondack Conservation Collaborative.

You can read more about John’s background and work at Rewilding.org, starting with his latest article “Rewilding Distilled” which takes you through the fundamentals of Rewilding. And… that’s where we’re starting today, with John’s definition of Rewilding…

Read more about John’s work in his series on the Split Rock Wildway.

I’m an Ecology undergraduate student at the University of North Texas. Over the years, I’ve become increasingly interested in becoming involved with a rewilding project after graduation. This podcast has been very helpful so far in listening to some of the efforts taking place across North America. I was wondering; however, if you would be able to suggest any projects that are looking for an extra pair of hands after this coming May. Additionally, if there are any practitioners that you are aware of that are in the habit of taking optimistic masters students, I would love being pointed in their general direction.

Thank you for your time and the work you have done and are doing.

Call Northeast Wilderness Trust in Montpelier, VT. John Davis is on their board of directors. They are awesome!