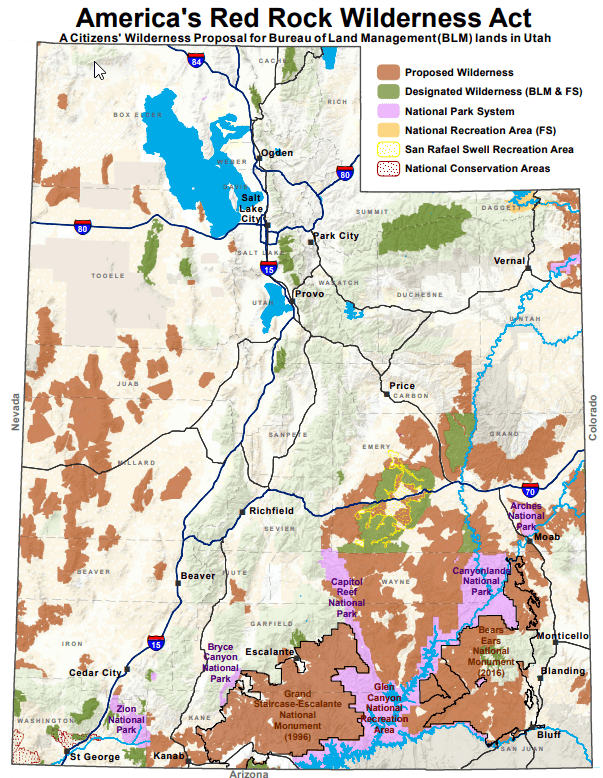 New peer reviewed research shows that America’s Red Rock Wilderness Act also makes a significant contribution to mitigating climate change. Protecting these wild landscapes would keep a significant amount of fossil fuels in the ground, accounting for 5.7 percent of the carbon mitigation needed to limit global warming to 1.5 degrees Celsius. Additionally, scientists estimate that the lands proposed for protection currently sequester and store 247 million metric tons of organic carbon in plants and soils. Designating these lands as wilderness would even help preserve flows in the Colorado River (the lifeblood of the arid Southwest) by preventing surface-disturbing activities that cause windborne dust to coat Colorado snowpack, melting it faster and earlier.

All lands proposed for wilderness designation in America’s Red Rock Wilderness Act are owned by the American public and administered by the Bureau of Land Management (BLM). The bill is supported by SUWA, Sierra Club, the Natural Resources Defense Council, the Wasatch Mountain Club, and more than 200 other national and regional conservation organizations belonging to the Utah Wilderness Coalition.

Take action and let your congressperson know how important America’s Red Rock Wilderness Act is to you!