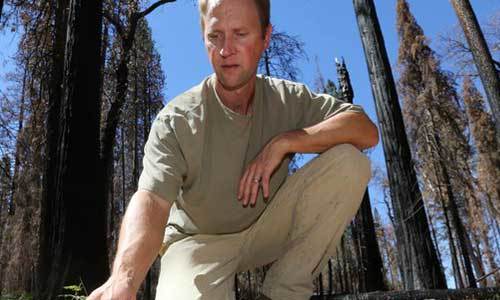 Chad Hanson co-founded the John Muir Project in 1996. He first became involved in national forest protection after hiking the 2,700-mile length of the Pacific Crest Trail from Mexico to Canada with his older brother in 1989. During this hike he witnessed firsthand the devastation caused by rampant commercial logging on our National Forests in California, Oregon and Washington.

Chad finished his Bachelor of Science degree from UCLA after completing the Pacific Crest Trail and then attended law school at the University of Oregon, during which time he also began his career as an environmental advocate working for Native Forest Council and volunteering for the Sierra Club. Chad earned his law degree in 1995, and started the John Muir Project shortly thereafter.

Chad is the author of Smokescreen: Debunking Wildfire Myths to Save Our Forests and Our Climate