Every Woods Is the Same 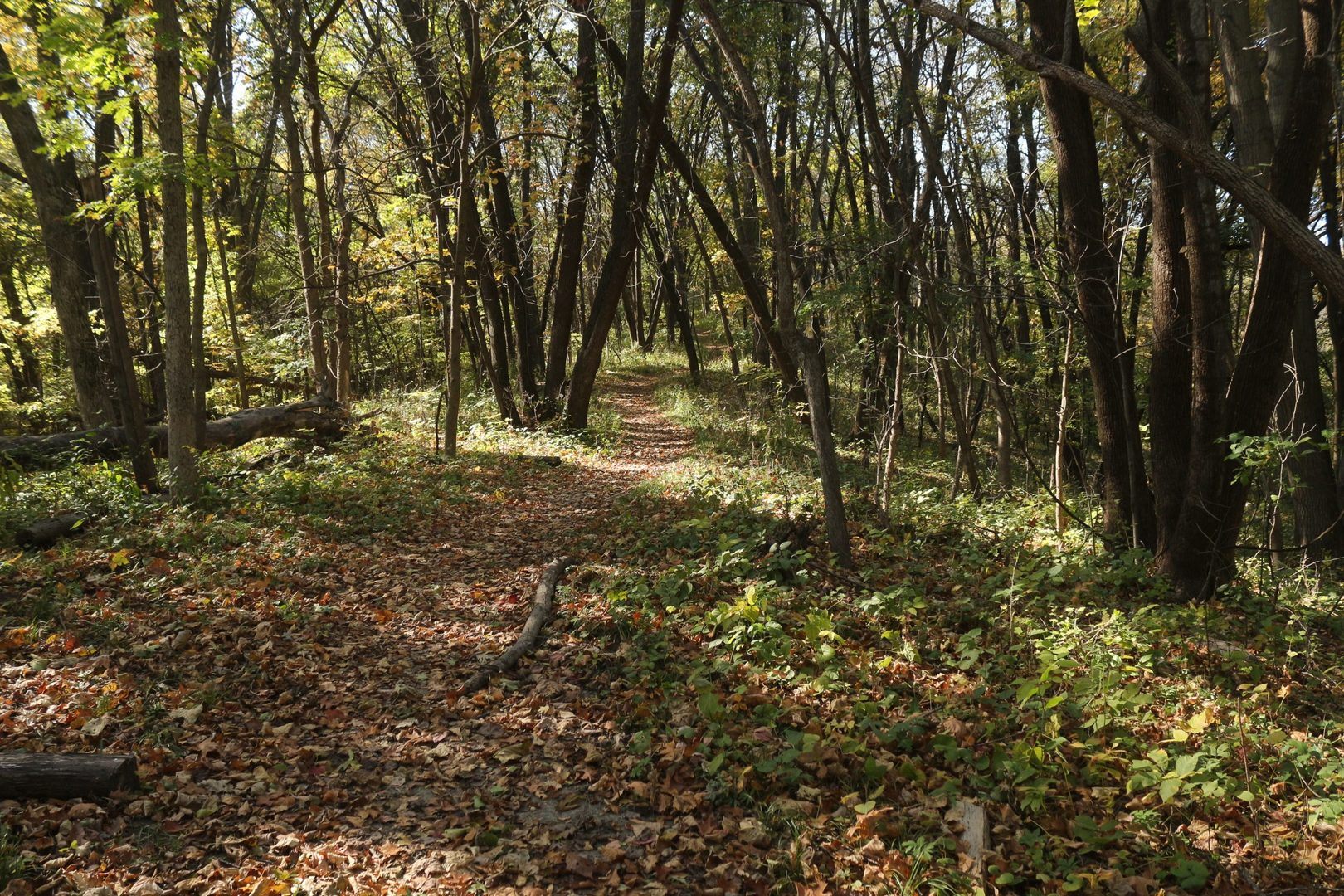 Trail Scene in a state preserve

In this piece, Leland Searles writes on the damage to Midwestern woodlands over the last decades, but, with rewilding in mind, in a hopeful way. The essay first appeared on the BeWildReWild website (bewildrewild.org), and it represents TRI’s new consideration of the Mississippi-Missouri basin as a crucial element in continental rewilding.

In many of central Iowa’s woodlands, I have come to expect a greater diversity of animal and plant life than actually presents itself. This wishful thinking underscores an underlying disappointment from otherwise uplifting time among the trees, time that begins with the hopes on entering a tract for the first time or returning to some timber to discover species and interactions I have missed.

Several historical events and processes, working together, account for this lingering disappointment, along with the personal need for discovery and the thrill of something new. First, most present-day woods have been logged or even clear-cut, to make cabinet lumber, construction timber (beginning with log cabins), and firewood; convert woods to crop land or open pasture; saw rail ties; and build cities and towns and the roads that connect them. The expanding human presence has been the single most important influence on our woodlands, in violation of Aldo Leopold’s admonishment to “keep all the parts.”

Second, high deer populations have led to a constant over-browsing of the naturally occurring understory shrubs, tender seedlings and shoots, and herbaceous plants. What remains are the plants of last resort as food for the white-tails and the plants that can reproduce rapidly from seed or by rhizome. This problem helps account for the failure of many woodland types – the classic upland oak-hickory woods, the occasional copses of black and sugar maples – to regenerate. Deer populations explode because their natural predators, mountain lions and wolves, were shot out as a condition of “civilizing” and “taming” the land, and because their threats to humans were greatly exaggerated. Without those predators, the deer abet the erosion of stream banks with their high traffic of hooves, and they overconsume their choice and fallback plant foods. They have become complacent in the absence of a natural predator-prey relationship. 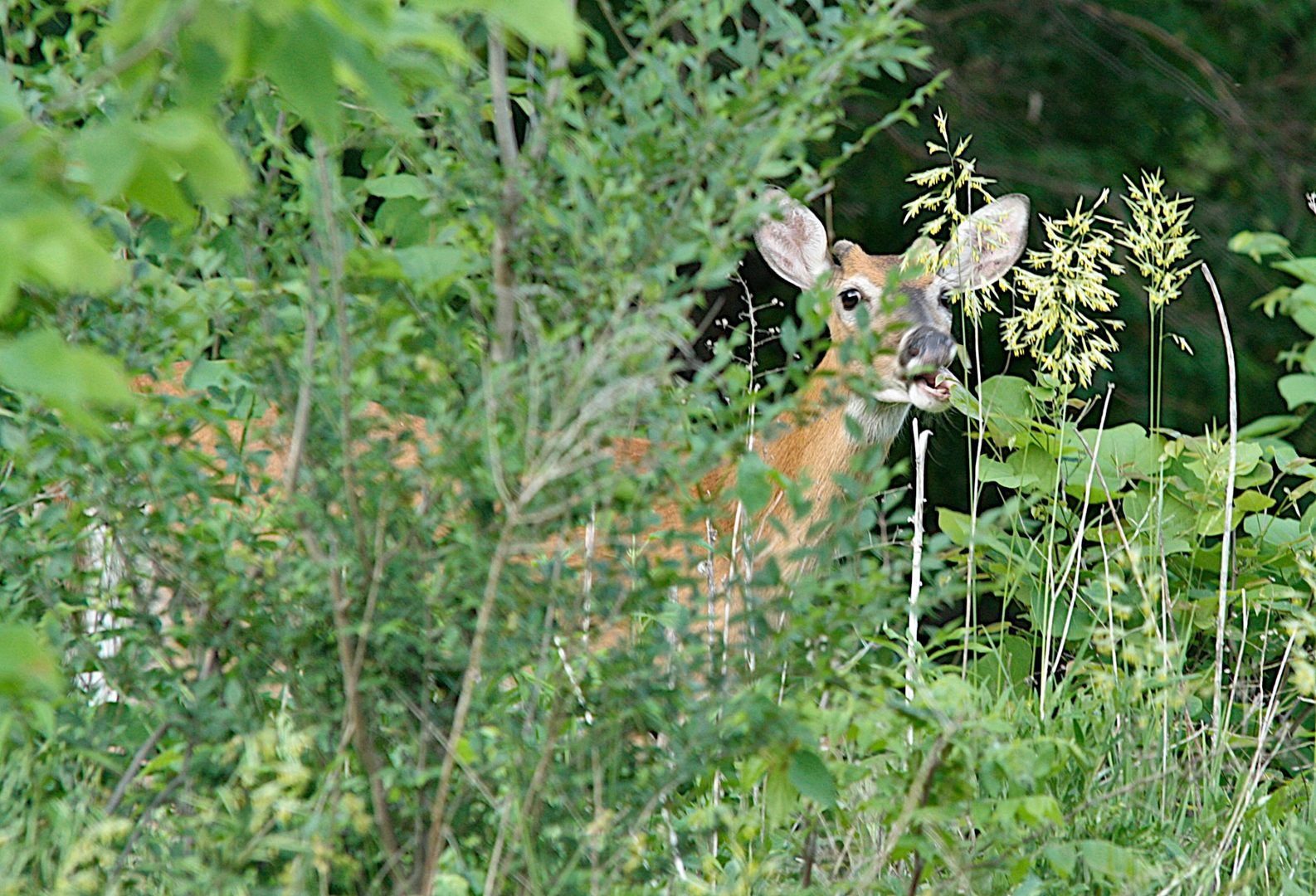 Human hunters are poor replacements for carnivorous cats and dogs, partly because game regulations restrict hunting of females, the single most effective natural means for controlling the population of any animal species with a spinal column (and many without one). What’s more, humans want the highest quality animals – the bucks with the biggest racks and most tines – unlike predators, whose sense of efficiency leads them toward the more vulnerable older, younger, and enfeebled individuals. Thus humans mostly opt out of the population control function that predators have, and hunters do their own damage to woodlands: plastic shotgun shell casings, lead shot from legal and illegal target practice, overuse of trails, and more.

Third, invasive plant species crowd out native species through a variety of mechanisms. Honeysuckles dominate the understory of many Iowa woodlands, and their dense shade on the ground below inhibits and prevents the growth of many woodland species. Deer seem not to browse them, nor the buckthorn that is equally aggressive in edge habitats. Undoubtedly, some widespread invasives alter the soil chemistry, causing allelopathic or toxic conditions for germination of native seeds, much as black walnut naturally does. Some, such as garlic mustard, shed huge quantities of seed for the next generations, while some woodland natives produce relatively few seeds. People introduced Black Locust to the Midwest (not the native Honeylocust, a different tree), which comes to dominant the canopy by both producing dense shade and forming monocultural stands. 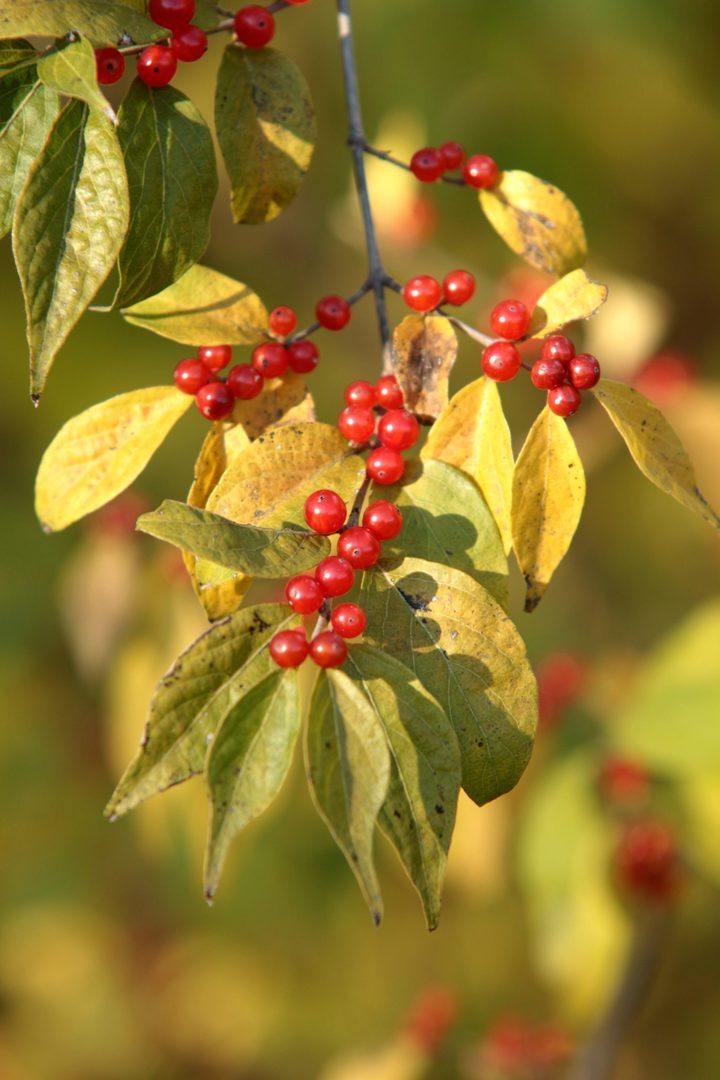 Fourth, our woods host too many people who also drive, run, and walk past lawns, pastures, weedy edges, and other unnatural ecosystems. Seeds that cling to our clothes, shoes, and tires follow our wanderings among the trees, and some of these grow well in the forest soils, sunny openings, and shady areas. In addition, we prefer paths of asphalt, gravel, or wood mulch that are not normally found in our central Iowa woods, and these paths are disturbances that facilitate invasive annual bluegrass, common plantain, creeping Charlie, dandelions, garlic mustard, mouse-ear chickweed, and other plants that like the destabilized ecology that follows humans. A few native plants, like Wood-Nettles and Common Blue Violets, become like deer, overpopulating our trails and suppressing the natural diversity that should exist there.

Speaking of humans, and fifth among the reasons, our tendency to take the best and leave the rest applies to firewood, morels and other edible mushrooms, wild leeks, and other woodland resources. We, too, are overusing the woods for food and resources, like the deer. In the process, we disturb nesting birds, eliminate or reduce the populations of fungus and plants that we harvest, and reduce the habitats for a wide variety of other living things: the bacteria and nonedible fungi of decomposition, the balance of small predators (insects, spiders, some songbirds) with their prey. The declines of many species are observable, as is the overall loss of complexity and biodiversity.

One last factor: the sizes of almost all our remaining woodlands are relatively small, meaning that there are few central areas in which biodiversity is maintained and protected by a buffering edge. The woods are little more than edge habitats, and they suffer from this: Brown-Headed Cowbirds parasitize the nests of other songbirds with their own eggs throughout; successional trees and scrubby growth thrive in place of mature and maturing woodland communities, and invasive species can spread unchecked.

Small size alone is very problematic, and this has effectively settled an old debate in conservation, the “Single Large or Several Small” (SLOSS) discussion. Neither side is a clear winner, although “Single Large” comes out with a few advantages, the main one being that a large woodland has sufficient interior to maintain more biodiversity than any small one in a fragmented landscape. However, a single, large, forested area that lacks wildlife connections to other, similar areas of any size is incomplete. Why? Genetic diversity underwrites all other kinds of diversity – number of species and complexity of food webs, to name two – and genetic diversity declines in both large and small woods, if they are isolated. The answer is “Multiple Large” with good ecological connections between them. (With this, connected small areas are far more likely to succeed and play important roles.),

After years of these assaults and incursions, one result is my impression of sameness for many of Iowa’s woodlands, based on observations of bird life (no Broad-Winged Hawks here), tree species (where are the Kentucky Coffee-Trees?), shrubs (viburnums, Eastern Wahoo, Bladdernut?), specialist pollinating insects, many lichens and mosses, edges and interiors, and, importantly, and human behavior in regard to our woods. For me, a lover of the outdoors and the richness of the life forms that make up a healthy ecosystem, the condition of our often still beautiful woods is disconcerting. 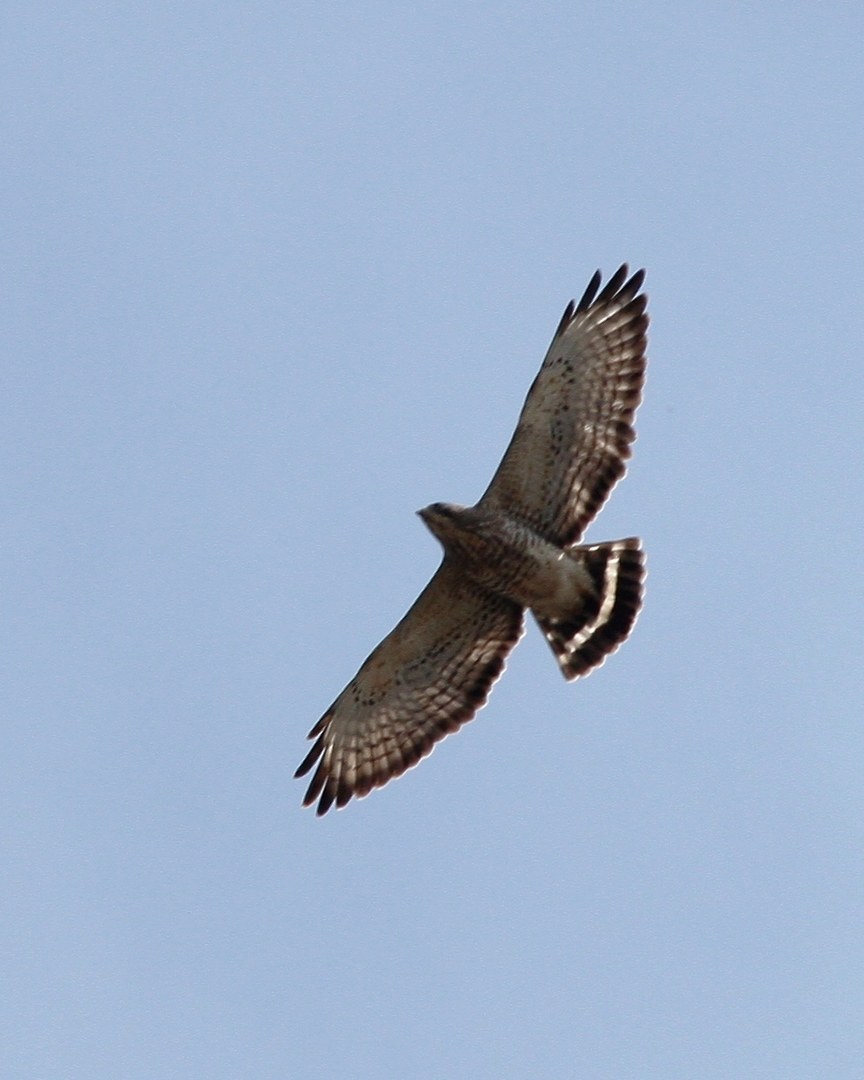 It is time for me to admit that the title of this piece, but not its content, exaggerates the problems with our woods. Each one I have visited does, in fact, have unique topographical and biological qualities. One has a large area of classic oak-hickory uplands with open-grown savanna oaks on the edges. Another consists of mostly stream terrace woods with forested oxbow wetlands. Diversity does still exist. It is reason for a degree of hope. Yet my reaction, after many hours of sitting, standing, and walking in the woods, making notes on the animal and plant life, watching vireos and warblers glean insects from twigs during migration, and peering at the leaves of mosses through a jeweler’s loupe, remains: in some manner, every woods is the same, for all the reasons I have described. To disregard this and a degree of sadness it should bring is to remain detached from the very source of our own life and wellbeing, as we expand our influence and presence as the single most important reason for the decline.

With some exceptions – a stretch of the Middle Raccoon River, parts of the northeast Driftless Region, and sections of the Loess Hills – Iowa is the very opposite of multiple large, ecologically connected woodlands. But it can be that for the most part, and it should, for land’s sake. 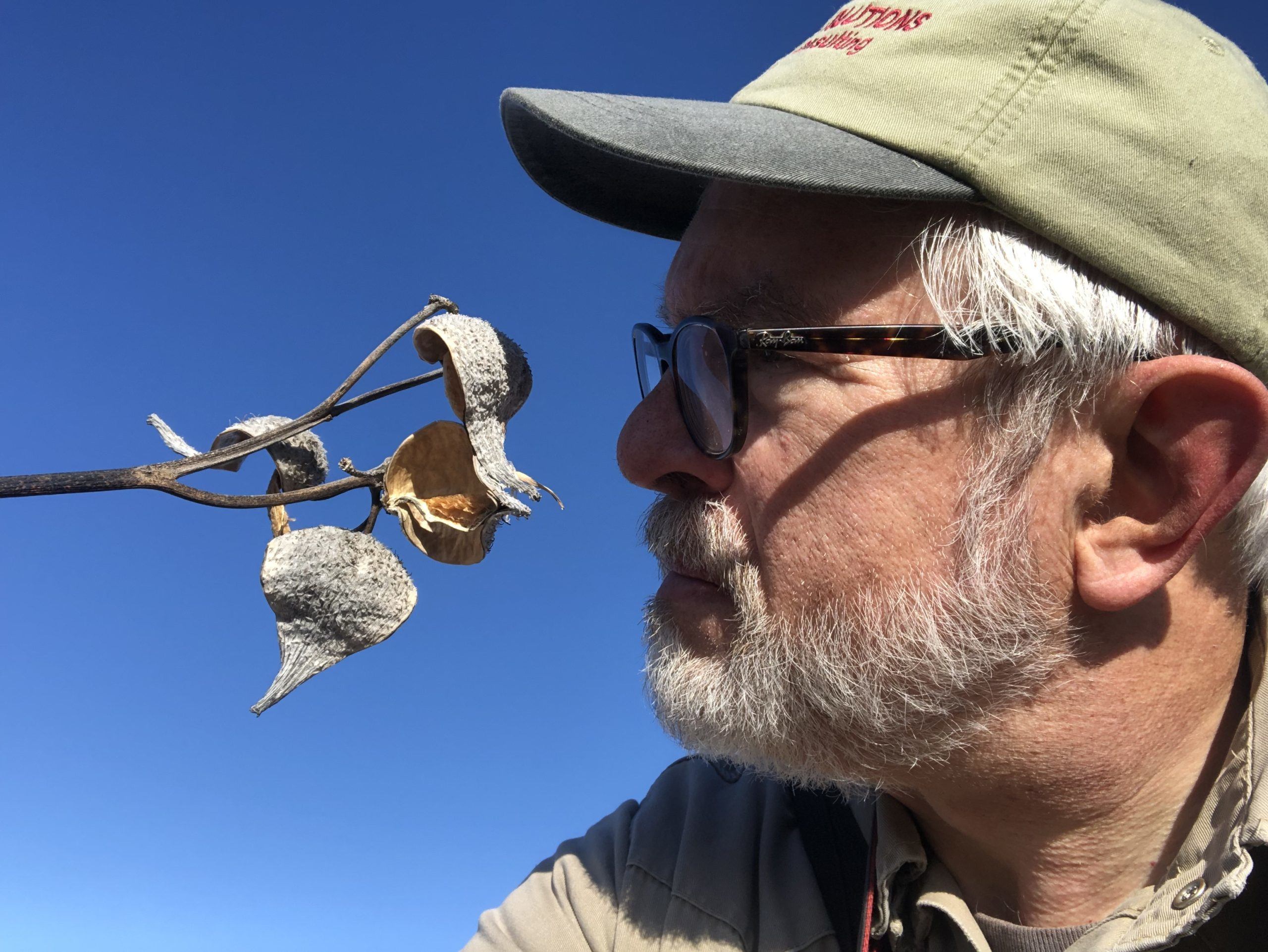 Leland Searles
After earning MA and PhD degrees in sociocultural anthropology, Leland moved away from teaching to start a business in restoration ecology. The fascination of plants and insects from early youth returned to inspire that move. He has expertise in Midwest botany, ecology, stream hydrology, and other areas. His observations “in the field” led him to conclusions that paralleled those of rewilding, bringing him to become entwined with several Midwestern rewilding people and efforts. Still in business, Leland uses the principles of rewilding to think about clients’ needs, the watersheds in which they live and own land, and the possibilities for wildlife.
Spread Rewilding Around the Globe!