Sea Shepherd captures footage they have been trying to get for years!

Sea Shepherd volunteers on the ground in the Faroe Islands have captured horrific scenes of the slaughter of a pod of pilot whales that took place at Hvannasund in the north of the island archipelago on Thursday morning. Approximately 120 pilot whales were slain along with many dolphins.

People who care about wild species and their habitat will not want to stand by and let this slaughter continue. Please send your comments to Danish Prime Minister Lars Lokke Rasmussen at stm@stm.dk and include this clip in your letter. 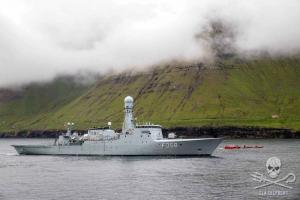 The Danish Navy vessel, HDMS Triton attempts to block the view of the arrest of the Sea Shepherd crew from the Sam Simon.

Campaign leader Rosie Kunneke and crew member Christophe Bondue were handcuffed and removed from the beach, and two crew members have been arrested. They were over two miles away and did not break the law by approaching within a mile of the whales, but the Navy said they had the authority to extend the distance to two miles to justify their arrest.

“What greater legacy can you leave than because of you a species survived,

because of you a habitat was protected.