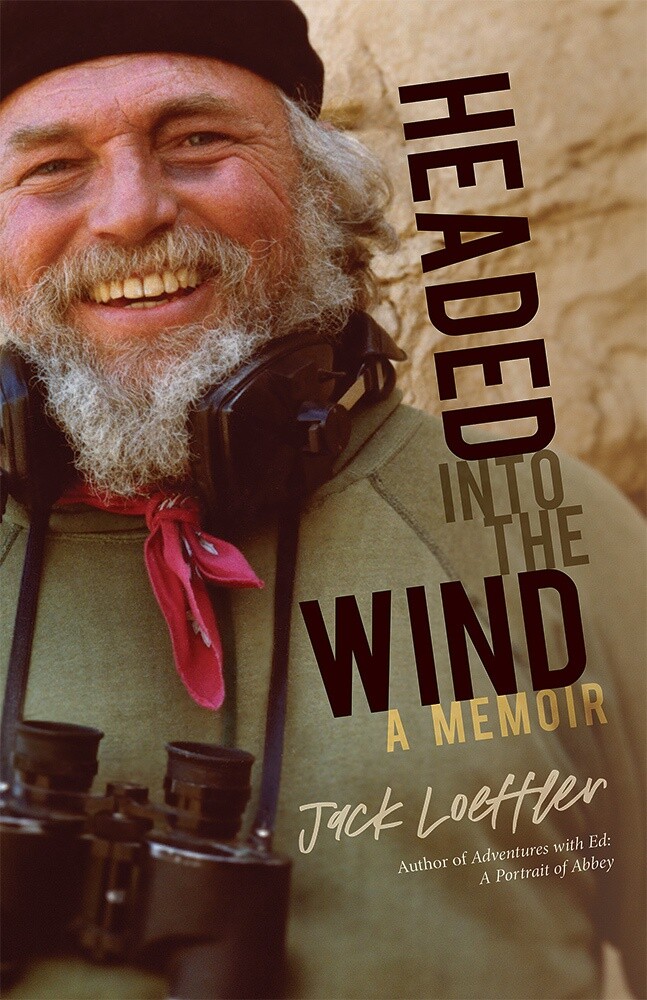 HEADED INTO THE WIND by Jack Loeffler

Headed Into the Wind: A Memoir by Jack Loeffer
Published by UNM Press, 2019.

Jack Loeffler has written a thoroughly enjoyable book on his life, interweaving his life among Southwestern conservationists/philosophers such as Ed Abbey, the counterculture movement, the beat generation, love of Southwestern nature, and respect for traditional cultures.  The book recounts the early years of environmental activism; and Loeffler was on the front lines.  He gives us an important historical context for today’s movement.  He writes eloquently about the problems faced by nature from unrelenting development and constant growth.

Loeffler is right to emphasize the dangers of relentless economic growth.  Recognizing that we have limits is the mark of maturity.  In contrast, unfettered capitalism is neoteny in action; it expresses the selfishness and wantonness of a four-year old.  Although humans reach adult size, we want more (power / money) so we can get more (power / money).  This culture builds on the exploitation of nature and other humans.  Greed is the root for both.  Right now, it takes one year and seven months to replace the resources humans use in one year.  That is clearly unsustainable.

Loeffler writes about many Southwestern cultures that do achieve maturity and care for nature.  We can learn if we pay attention.  Who knows, however, how long we will have the chance to do that learning.  It is very difficult for any indigenous culture to stand in the face of the unrelenting market and Manifest Destiny. For that reason, Loeffler has recorded the thoughts of elders about traditional ways.  The opening quote of the book is from Camillus Lopez, Tohono O’odum lore master.  “If you look at nature and can’t see yourself in it, then you are too far away.”

The book conveys a personal narrative, including the life of solitude as a fire lookout. Loeffler then describes his entry into radical environmentalism and the Black Mesa Defense Fund.  Guided by Navajo and Hopi elders who opposed the strip mine on Black Mesa, Loeffler and colleagues fought a strip mine that would take coal from an area these elders considered sacred, as well as deplete the aquifer.  Water is life in a dry environment, but Peabody Coal didn’t care and prevailed in this fight.  Goliath won, and David lost.  The water table has dropped and there is more carbon in the atmosphere.

The book’s contents include a treasure trove of lifetime experiences and philosophical thoughts on the importance of nature from Loeffler’s 82 years on the planet.  He also includes the philosophies from a host of influential friends.   He emphasizes resistance to the type of power that benefits a few but is maladaptive for the many. The book has much to offer students of nature, those who teach, and ordinary people needing to regain closeness to their surroundings. I strongly recommend reading the book.   While some may not be excited about the non-linear sequence of experiences, I found it to be a strength, enabling integration of different perspectives.

Loeffler makes it clear that we cannot learn to live within nature, instead of on its back, until we have a sense of place in nature and belonging.  He calls us to “rebalance in the flow of nature.”  If we lose a sense of belonging in nature, our consumer-oriented culture will exhaust a resource in front of us and simply move to the next frontier to extract more.  We live on a globe, however, and eventually we will consume our way around that sphere and arrive at our own back door.  We need the generosity of spirit to recognize our interconnectedness with all life forms.  We can try to do this now, or we can wait until it is thrust upon us with great penalty.

Get your copy of the book: Headed Into the Wind: A Memoir.

Listen below to the Rewilding Earth Podcast – Episode 63: Jack Loeffler on Rewilding Human Consciousness and Tales From An Extraordinary Life