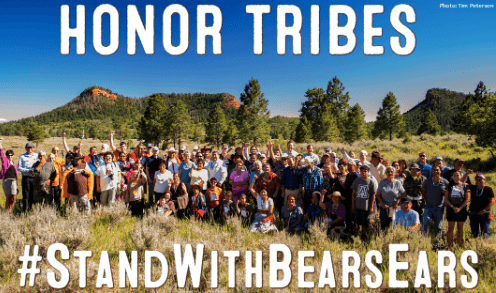 From the Southern Utah Wilderness Alliance

Utah politicians have launched a full court press in an attempt to convince President Trump to eviscerate or even rescind Bears Ears National Monument.

Last Friday, Governor Gary Herbert signed a resolution from both houses of the Utah Legislature urging the present to undo Bear’s Ears. And on Tuesday, Utah Congressman Jason Chaffetz met with President Trump and raised Bears Ears “as subject number one.”

Meanwhile, Trump’s Interior Secretary nominee Ryan Zinke has pledged that Utah will be the first state he visits once he’s confirmed by the Senate — to address the “problem in the great state of Utah.”

Ryan Zinke needs to explain what he intends to do about Bears Ears. And he needs to hear that Americans from all across the country support Bears Ears National Monument.

Ask your senators to tell Ryan Zinke that they support Bears Ears when the vote is taken on his nomination.

It’s questionable whether President Trump has the authority to revoke or reduce the size of Bears Ears National Monument. And it’s not clear that he has any intention of doing so.

But Utah’s congressional delegation and Governor Gary Herbert are certainly going to bend Zinke’s ear when he visits Utah. We need to ensure that Secretary-designate Zinke hears the other side of the story. And if he intends to reduce or rescind Bears Ears National Monument, he is unacceptable as Interior Secretary.

Thank you for taking action.