By Rewilding on April 10th, 2018 in Healing Nature's Wounds 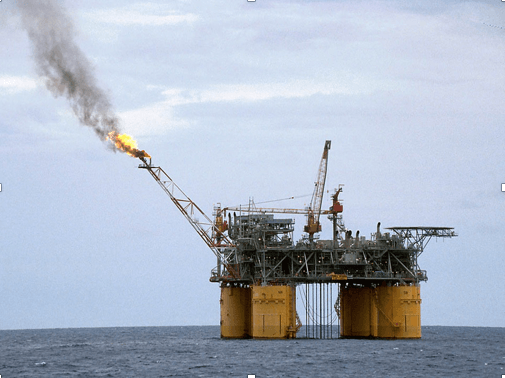 How We Fight Trump’s Dirty Drilling Plan for Our Oceans

It was a jolting response to my efforts to contact California counties to see if they would join the wave of communities passing resolutions opposing Trump’s offshore drilling plan.

Here was a public official who should be defending places like Yosemite quipping to me about drilling. I expected officials in California to be uniformly against offshore drilling. It’s been tremendously unpopular since the 1969 Santa Barbara oil spill. But this presidency has emboldened damaging rhetoric about fossil fuels and climate change (among other worrying dialogue).

Unfettered oil drilling was one of Trump’s key campaign promises. On the heels of opening Bears Ears National Monument to oil drilling, Trump proposed to vastly expand offshore drilling. The proposal seeks to open nearly every inch of our federal waters for oil and gas leasing.

Offshore drilling platforms also make for telling images of the industrialization of our ocean. Oceanexplorer.noaa.gov/explorations/03mex/logs/sept21/media/dscn0011.html

Over the next five years, Trump’s plan includes 47 lease sales in the Pacific, Atlantic, Gulf of Mexico, and off Alaska that will commit these areas to decades of oil development. It will damage coastal areas that have long been off limits to oil drilling — even areas of the Arctic and Atlantic that were permanently protected by President Obama.

Back then, Obama’s protections didn’t seem to go far enough to shift the nation away from our dangerous dependence on oil. After all, the Obama administration also offered huge oil leases in the Gulf of Mexico and Alaska’s Cook Inlet.

But now the Trump plan seeks to transform every wild oceanscape into an industrial wasteland. We’ve seen how this can play out in the Gulf of Mexico, which already tells a harrowing tale of industrialization and death.

The Gulf of Mexico already has about 7000 offshore platforms installed and a tangle of pipelines. The industry can dump virtually unlimited quantities of oil wastewater into the Gulf, including toxic fracking chemicals. In 2014 alone oil companies dumped at least 75 billion gallons of wastewater into federal waters.

The oil industry has damaged the Gulf’s shorelines and exacerbated flooding. Canals cut for pipelines erode sensitive wetlands—degrading some of the nation’s most important migratory bird habitat. The problems are so bad that Louisiana’s levee boards sued the oil companies for their role in flooding.

And the Band of Biloxi-Chitimacha-Choctaw must relocate because their barrier island tribal lands are sinking from the combined threat of dredged pipeline canals and rising seas, making it the first community to receive national disaster resettlement funds. Meanwhile, poor coastal communities like Port Arthur are exposed to air pollution and health problems from petroleum refineries that support Gulf drilling.

Oil spills are just an everyday part of the offshore drilling business. Using federal oil spill data, we calculated that Trump’s proposed plan will result in more than 5500 oil spills. This doesn’t even account for catastrophic oil spills like the 2010 Deepwater Horizon. The Gulf is still reeling from that oil spill, which covered 1300 miles of shoreline in oil—permanently damaging saltwater marshes and stranding hundreds of sea turtles, whales, and dolphins. For example, the dolphins of Barataria Bay off Louisiana suffered severe lung disease from the spill, and the population is still in critical condition.

The wild places of the ocean are no place for such industrialization, which destroys biodiversity. The Gulf of Mexico is a wildlife hotspot. It is the only known spawning area of the Atlantic bluefin tuna; it is considered core habitat for endangered sperm whales; it is a hub of sea turtle nesting beaches. It is where nearly every North American bird stops while migrating south.

The Gulf should be a treasured place — not an oil industry sacrifice zone. 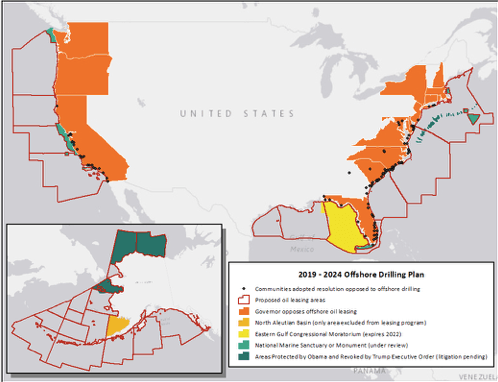 Here’s the good news: As the Trump administration moves to offer oil leases off every U.S. coast, the public resistance has been loud and fierce. More than 200 local communities on the Eastern Seaboard and the West Coast have passed resolutions against the plan. Thousands of concerned residents have hit the streets in protest. And state officials have spoken out forcefully against this reckless proposal.

California’s Lt. Governor Gavin Newsom proclaimed, “I am resolved that not a single drop from Trump’s new oil plan ever makes landfall in California.” Indeed, nearly every coastal state governor has voiced opposition to the plan (see figure and interactive map).

Now, under tremendous pressure, the administration appears to be listening. Or is it?

In a tweet Secretary of the Interior Zinke announced: “After talking with @FLGovScott, I am removing #Florida from the draft offshore plan.” And he also told a Washington Senator that the West Coast lacks “resources of any weight” for offshore drilling.

Does that mean that these areas will be spared? Officially, no decisions on the draft plan have been made.

Yet there’s a deeper concern. Trump has offered up the biggest drilling plan in history, but it may be like his “biggest” inauguration crowd in history. All along the proposal to lease everything has been a ruse.

According to the feds’ own documents, some of lease areas have “negligible” resources. Oil drilling everywhere is the type of pompous announcement expected from this presidency, and nearly every coastal politician can safely oppose drilling off their own coast.

But who will defend the Arctic and Gulf of Mexico?

Governors and lawmakers in Louisiana, Texas, and Alaska are not lining up to protect their natural heritage. Rewilding our oceans isn’t on their agenda.

Thus, it isn’t enough for East Coast and West Coast advocates to simply draw the line in the sand off our own shores. While I’ll be ecstatic if southern California is removed from the leasing plan, there will be no victory until the Arctic is protected and Gulf drilling ends.

It’s no coincidence that the first two lease sales in the plan are the Chukchi and Beaufort Seas. It will be critical to reverse this Trump drilling plan before oil companies can sink their drills into the vulnerable Arctic waters. There are several lines of defense, and we’ll need to engage each one with strategy and people power.

First, all 1.5 million people, conservation organizations, states and lawmakers that have lodged their opposition to the plan need to stand united against offshore drilling off all of our coasts.

Second, we must legally challenge offshore drilling. Trump’s proposed plan is unlawful and riddled with legal problems that will eventually end up in court. Already, a challenge to Trump’s attempt to reverse Obama’s permanent protections of the Arctic and Atlantic is pending in federal court.

Third, we need to expose the terrible damage wrought by offshore drilling through social and conventional media. If we publicize the dangers adequately, the Trump administration’s own hubris may doom the plan.

The Trump administration has brought back the “Drill, Baby, Drill” era. Remember back in 2010, when the federal agency being investigated for its role in the Deepwater Horizon oil spill flippantly served a cake at a staff meeting decorated with that slogan?

Author holds the sign next to Frostpaw, the Center for Biological Diversity’s polar bear mascot, at a protest of the offshore leasing program. Credit: Drew Bird Photo

But Trump can’t have his cake and eat it, too. His drilling plan will be scrapped, one way or another, if we conservationists stand united against it.

How you can help: Pass a resolution in your town: Communities are taking bold actions to stop this assault with more than 150 passing resolutions opposing offshore drilling. Additionally, the next iteration of Trump’s nationwide drilling plan will be unveiled in November. When it drops, we’ll hit the streets and demand an end to fossil fuel leasing, and in the meantime, urge your representatives to do the same.

(Here’s a link to addresses for your Senators and Representatives: https://www.senate.gov/reference/reference_index_subjects/Directories_vrd.htm )