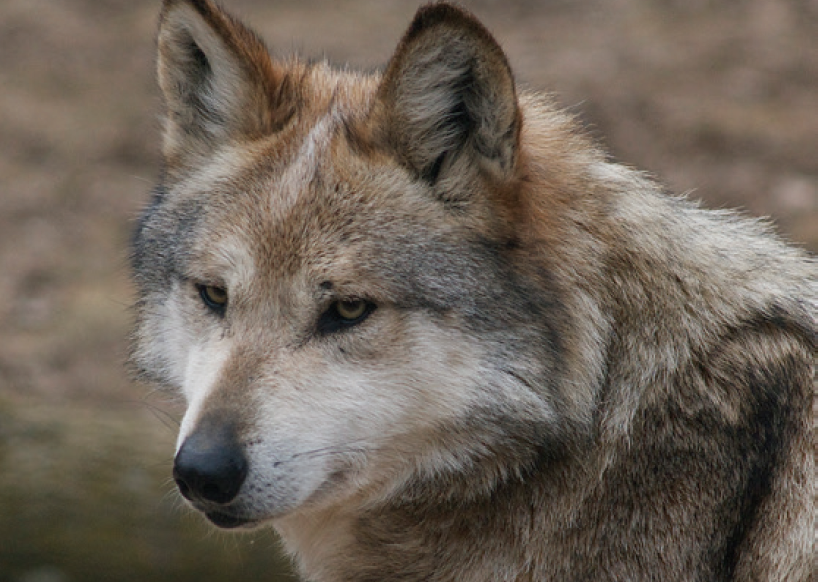 Fact Sheet from Defenders of Wildlife

The Mexican gray wolf has rebounded from near extinction in the 1970s to an estimated 163 in the wild at the end of 2019. Considerable effort is still needed to ensure a self-sustaining population, and the hunting community can play a valuable role.

The Mexican gray wolf was listed under the endangered Species Act (ESA) in 1976 following years of predator eradication efforts that drove this unique subspecies toward extinction. A few years later, the U.S. Fish and Wildlife Service (FWS) began a captive-breeding program with just seven remaining wolves in hopes of reestablishing a wild population.

In 1998, FWS reintroduced wolves in New Mexico and Arizona. This population has slowly grown, but setbacks to recovery, including high numbers of illegal killings, have continued due to real and perceived conflict with hunters and other stakeholders.

In 2015, FWS released a set of regulations—known as the 10(j) rule—to guide Mexican gray wolf management. Due to a recent court decision, FWS will rewrite this rule, which will be finalized by the spring of 2021. 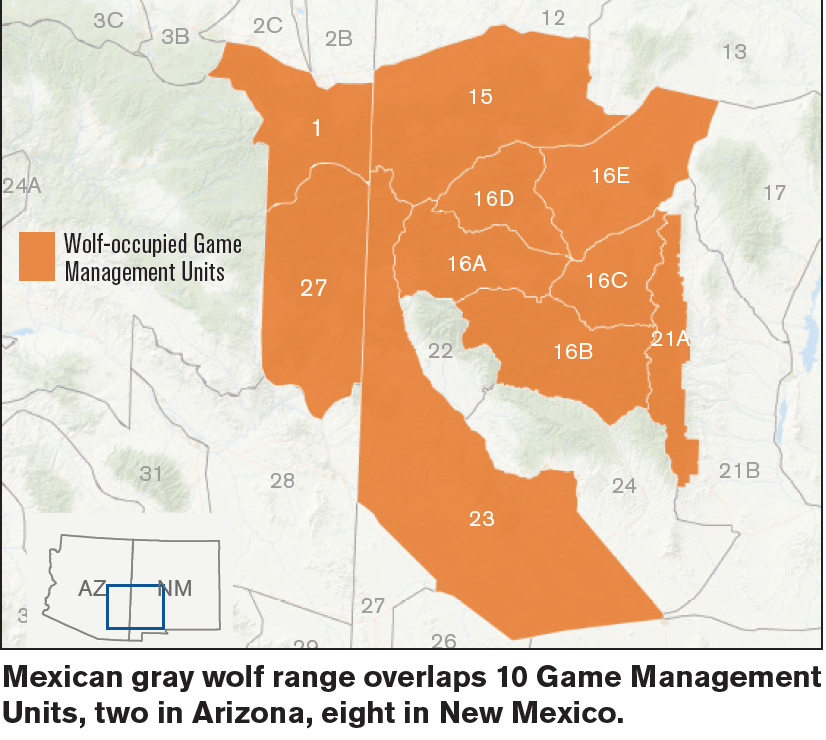 The reintroduction of Mexican gray wolves in parts of Arizona and New Mexico has raised concern from local communities about potential impacts to traditional ways of life. Some of this push back is rooted in the fear that wolves will diminish hunting opportunities for big game species like elk and deer. An understanding of how wolves can benefit big game and other wildlife coupled with actual data on deer and elk hunting success rates in areas with Mexican gray wolves offer a different picture of the relationship between these species.

Wolves serve an important ecological role in keeping elk and deer populations in check, which can prevent overgrazing and help maintain healthy plant communities and intact river systems. Because wolves tend to hunt older, sicker animals not typically targeted by hunters, they may also help control the spread of deadly infectious disease like Chronic Wasting Disease (CWD), which afflicts ungulates like elk and deer. So far, CWD has been detected in only one wolf-occupied county in New Mexico, but it could potentially spread to others.

As for the impact of wolves on hunting, data from the Arizona Game and Fish Department (AZGFD) and New Mexico Department of Game and Fish (NMDGF) illustrates that as the wolf population in both states has increased, the success rates of deer and elk hunters have risen as well. The wolf population more than tripled over the last decade increasing from 52 wolves in the wild in 2007 (29 in Arizona and 23 in New Mexico) to 163 in 2019 (76 in Arizona and 87 in New Mexico).

Over the same period, elk and deer hunting success and harvests have improved or remained stable in both states. 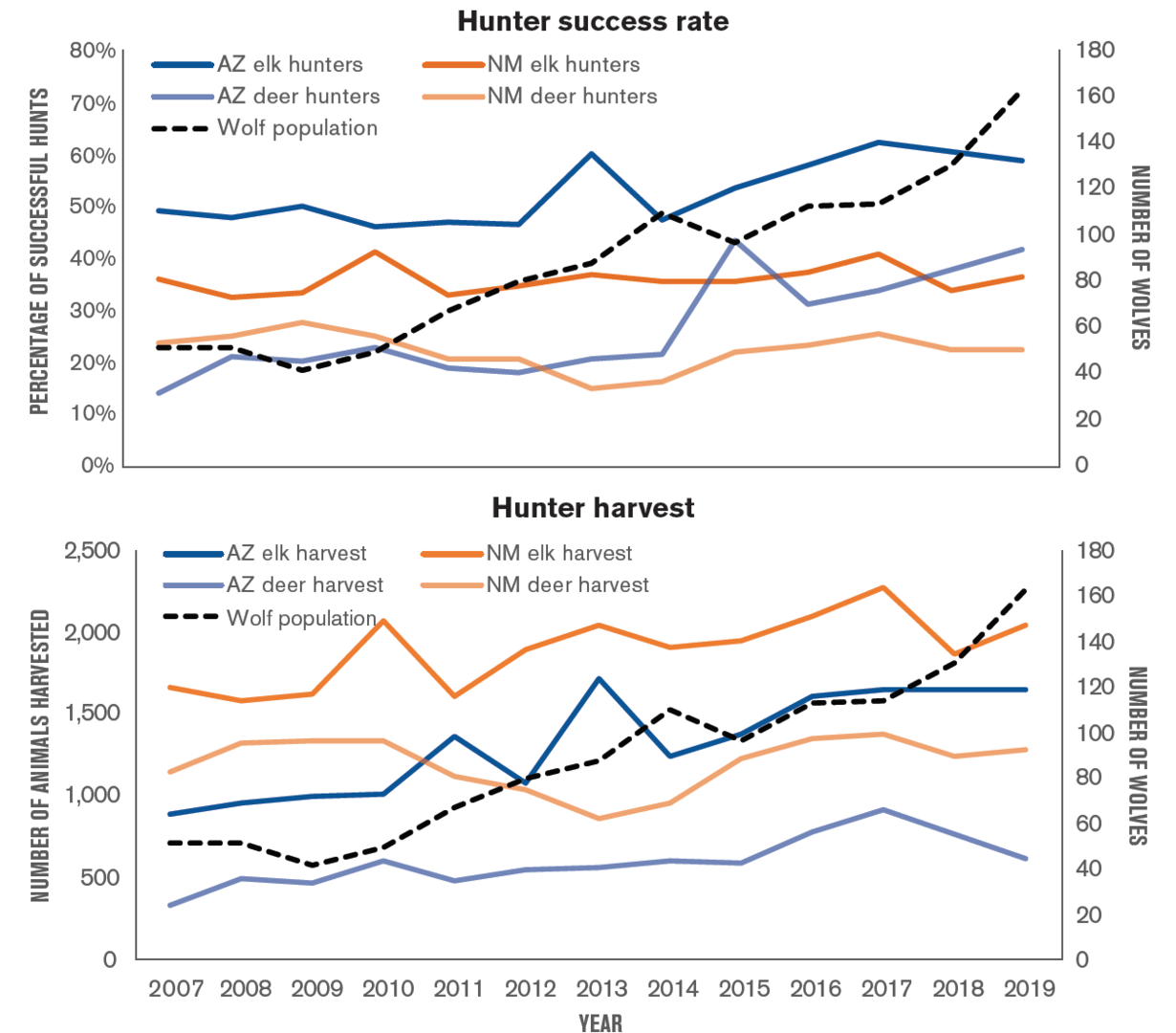 Hunters have a deep connection to the landscape that makes them vital to effective wolf conservation and management. As the Mexican gray wolf population continues to expand into suitable habitat across its historical range, hunters can help with the recovery of this endangered species. Since 1998, at least 96 wolves have been killed either by accident or on purpose. By learning how to distinguish between a wolf and a coyote and reporting all wolf sightings to state or federal wildlife managers, hunters can help reduce these incidents and inform management decisions.

Hunting is an economically and culturally important aspect of life in many parts of New Mexico and Arizona, and studies show that the reintroduction of Mexican gray wolves has not diminished it. Hunting remains a viable pursuit for outfitters and a reliable source of food for hunters who depend on it. Mexican wolves moving into new areas should not be viewed as a threat but an integral part of keeping landscapes wild and ungulate populations healthy, ensuring that hunting remains a treasured tradition for generations to come.