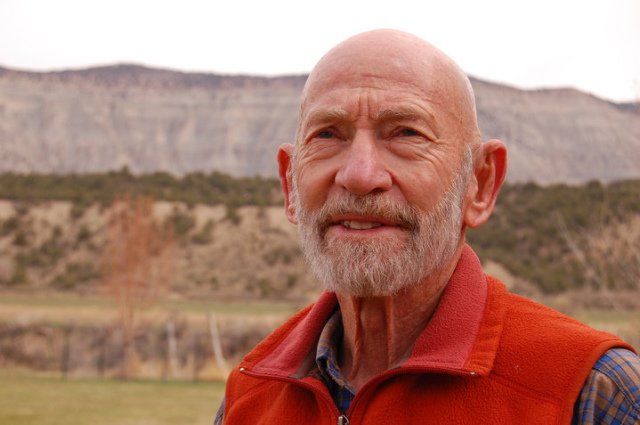 Like conservationists and scientists around the world, The Rewilding Institute was saddened to learn of the passing of Michael Soulé on June 17, 2020, at the age of 84. Michael was a cherished friend to many and an inspiration to all. He was woven into our lives at TRI in a variety of ways, as friend, mentor, teacher, academic advisor, founder and organizer of conservation organizations and campaigns. He is an integral part of all we have done and will continue to do. ~ editors

The first time I met Michael Soulé, he was the dean of conservation biology. The second time, he was a frog.

That first meeting was the founding of North American Wilderness Recovery, from which Wildlands Network and The Rewilding Institute evolved. Michael was a giant among giants at that inaugural meeting; and I (as the junior founding member, both intellectually and chronologically) listened in awe as he and Dave Foreman, Reed Noss, and other wilderness leaders explained to our host and sponsor, Doug Tompkins, how North American wildlife could be saved and restored. They outlined the 3 Cs approach of designating large Core wild areas, reconnecting them via wildlife Corridors, and restoring keystone species, particularly the large Carnivores who keep ecosystems healthy – the basic approach of North American rewilding, which Doug and his wife Kris McDivitt Tompkins then took to South America, Michael and Reed soon explained scientifically in their classic Wild Earth article “Rewilding and Biodiversity: Complementary Goals for Continental Conservation”, and Dave soon expanded into his landmark book Rewilding North America.

A year or so after that founding Wildlands meeting, our little Wild Earth editorial team drove cross-country in a talking station wagon that Kathleen Fitzgerald dubbed Norbert, to rendezvous in the Sonoran Desert with the Wildlands board and staff, our sibling group. Around the campfire one songful desert night – Coyotes ululating, owls hooting nearby – the stories grew wilder and wilder. Wildlands Network always had more than its share of silverbacks (“too many chiefs, not enough warriors,” I remember one board member later grumbling after vigorous debate over how to implement the grand vision), and this night several were in top form. Also in attendance, though quieter, were some intellectually, spiritually, and physically attractive women, suspected of being potential or actual financial supporters; and psychologists could explain better than I whether their pulchritudinous presence might have influenced the showmanship of the campfire storytelling. In any case, my clearest memory from that distant campfire is everyone rolling in laughter as Michael, with his Elven features, hopped around, imitating and telling us of some rare frog he’d found on a research trip years prior. I’ll never forget the twinkle in his eyes and the mischievously warm smile as he hopped past.

One more small reminiscence, of the many I’ll share with friends by campfires in coming months: Michael and I are driving together to a Wilderness Workshop event in White River National Forest, western Colorado. I’m quizzing Michael, who has begun a huge research and writing project on human nature and how we must understand it to address the extinction crisis. We agree that properly promoted, a book boldly titled SIN: 10,000 Years of Indolence, Sloth, and Debauchery might just sell, and might help scientists and activists build compassion for our wild neighbors. (With Michael’s family’s permission, we hope to soon share with Rewilding Earth readers some of the introduction from that unfinished work.) As Michael is explaining to me the biological basis for various human tendencies, I ask him to explain a few apparent anomalies. The one that he admits is hard to explain in evolutionary terms is this: Why do some people, me included, seem to have stronger nurturing instincts toward the young of other animals, particularly cats and dogs, than we have toward human children. (I admit to Michael, I never wanted kids, but I make an avuncular fool of myself cooing over kittens and puppies.) Maybe, Michael offered, we should simply celebrate that broader compassion as part of biophilia, part of humans’ affinity for other creatures, too.

Anyway, enough of my rambling. These stories I tell mainly to make the point that Michael should be celebrated and his legacy carried on not only for his brilliant scientific mind but also for his deep and broad compassion for others, his love for Nature, his wonderful sense of humor, and his hard work to save the wild world.

Immortality is best achieved, I trust Michael would agree, through permanent protection of wildlands and their wild denizens. I propose we honor and immortalize Michael Soulé by finishing the Spine of the Continent Wildway – which he proposed as the flagship for a National Conservation Corridors campaign (see his article here in Rewilding Earth on “A National Corridors Campaign for Restoring America the Beautiful) — along the Rocky Mountains and restore the top predators, including Gray Wolf, Grizzly Bear, and Puma, throughout. This we should be able to accomplish by 2030, in keeping with the popular Half Earth goal of protecting at least 30% of Earth’s lands and waters by 2030 and at least 50% by 2050. Two big steps this direction will be voting in Colorado this autumn to restore the Wolf, and electing a president and congress who will begin to clean up the mess and to protect all public wildlands for their highest and best uses: as wildlife habitat, climate stabilizers, and quiet recreation grounds. Mary Ellen Hannibal’s Spine of the Continent is a testimony to Michael’s National Conservation Corridors campaign, and Dave Foreman is well into an update of his monumental Rewilding North America.

Like Frodo and Hayduke, Michael lives. The Spine of the Continent Wildway will embody Michael’s goodness forever.