In Southwest Borderlands, the Yaqui Catfish Faces Its Final Days

Despite cooperative efforts by federal managers and Arizona ranchers, the Yaqui catfish is now on the brink of extinction in the U.S. The sobering outlook for this native fish comes as Republicans in Congress look to weaken the Endangered Species Act.

It’s the simple declarative starkness of the sentence that catches the eye: “Extinction in the United States is predicted by 2018.” The species in question is the Yaqui catfish, which few Americans have ever heard of, much less seen (or eaten). It is, however, the only native catfish west of the Continental Divide, capable of growing up to 2 feet in length, with the familiar whiskery barbels drooping down from its chin and the flattened underside characteristic of the bottom-dwelling catfish way of life.

The remaining U.S. population, in and around the San Bernardino National Wildlife Refuge in southeastern Arizona, has been declining by 15 percent a year, according to a new study in the journal Biological Conservation. That decline has continued even as a cooperative restoration effort by federal officials and private landowners has proved highly successful at protecting other aquatic species there. But for the catfish, with population recruitment “essentially zero” (meaning no younger generations surviving), the co-authors conclude that the last few elderly individuals still hanging on represent the end of the species in this country.

Only 20 adult Yaqui catfish remain in and around San Bernardino National Wildlife Refuge, and all are approaching the end of their lives.  W. RADKE/US FWS

Moreover, the threat of U.S. extinction coincides with trouble for the larger Yaqui catfish population in northern Mexico. Its extensive habitat running southwest from the border down to the Gulf of California is now experiencing the same damming of rivers and draining of aquifers that occurred earlier on the U.S. side of the border. Introduction of nonnative channel catfish throughout the Mexican range also threatens to hybridize the last remnants of the Yaqui catfish into oblivion.

The threat to survival of the species coincides with a move in the Republican-dominated U.S. Congress to “modernize” the Endangered Species Act, under which the Yaqui catfish is protected as threatened with extinction. In a hearing last week, Sen. John Barrasso (R-WY) proposed to eliminate “the red tape and the bureaucratic burdens that have been impacting our ability to create jobs” and impeding land management plans, housing development, and cattle grazing.

The U.S. Fish and Wildlife Service was thinking primarily about protecting and restoring aquatic species like the Yaqui catfish in 1982 when it acquired a 2,400-acre ranch to create a wildlife refuge in the San Bernardino valley, an area where year-round streams, marshes, and grasslands once supported an array of indigenous wildlife. Cottonwood, willow, and other vegetation used to soak up rainwater as it flowed slowly across the relatively flat landscape, says William R. Radke, who is manager of the San Bernardino refuge and senior author of the Biological Conservation study. But overgrazing by cattle in the late 1800s denuded the landscape. Prolonged drought and earthquake activity also transformed the area, with the result that the occasional rainfall began to rush through the area, cutting deep channels into the surface.

Early ranchers “didn’t understand the resources of the West weren’t going to be there forever,” says Radke. “They just thought ‘this grass is going to last forever, let’s utilize it. This water is going to last forever.’ They found artesian water, drilled a well, and let it run, like leaving your faucet on.” The stream channel in some places “dropped 20 feet lower than it was in the 1800s,” he says. The water table dropped with it, and rivers and streams that once ran year-round instead ran dry.

The San Bernardino refuge has benefited from neighboring ranchers who have worked to protect endangered species.

But over the past 20 years, waterways in and around the San Bernardino refuge have begun to recover. Elsewhere, private landowners often resist programs to restore endangered species. But the refuge has benefited, says Radke, from a group of neighboring ranchers who ”have this incredible environmental ethic, and do all kinds of stuff in support of federally endangered species.”

Construction of rocky barriers to back up the water flow, combined with other wetland and riparian zone restoration work, has now produced a green border of resurgent vegetation.

“We saw a huge change,” says Josiah Austin, a local rancher who participated in the restoration program. “In certain places, you could see it within a season, and generally there was a big change over a 10-year period,” where the peaks and valleys of the old flooding cycle evened out and became less extreme. “The water just stayed in the system longer. Instead of passing through in two or three hours, it took three or four months.”

In a West that is running out of water almost everywhere, adds Radke, “it’s one of the few places that I can think of that actually has a gaining water table.” ? ?New ponds have created habitat for threatened endemic fish including the Yaqui topminnow, the Yaqui chub, and the beautiful shiner. The catfish, reintroduced to the area in the 1990s, also seemed to be doing reasonably well for a time. The refuge would get tantalizing reports — for instance, from a caretaker on private land “who knew nothing about the catfish,” says Radke, but described exactly their natural behavior, in which juveniles “hang around in this amoeba-like, basketball-sized ball of fish.” No juvenile specimens turned up, but “so many things come into play when you’re trying to catch catfish,” says Radke. “Are they hungry? Are they moving? What’s the water temperature? Is there vegetation in the water that keeps them hidden?” So local conservationists remained hopeful.

The new analysis looked more closely, however, using a standard mark-and-recapture technique: Researchers sampling a body of water mark individual catfish that turn up, release them, and then calculate the total population based on how often those marked fish turn up in subsequent sampling. The study concluded that fewer than 20 adult catfish remain in and around the refuge, and since they are all survivors of the 1,824 individuals introduced in the 1990s, all are now approaching the end of their lives.

What went wrong? Other fish species have been able adapt to pond habitat in place of their native rivers. But for the catfish, something is apparently still missing, says co-author Grant Harris, a Fish and Wildlife Service ecologist. The ponds may simply be too small or lack some trigger that causes the fish to breed — a sudden pulse of water, for example, or a change in water temperature. Or maybe the catfish breed successfully, but something about the substrate, the absence of logs, rocks, or cavities, deprives the young of the hiding places needed to survive to maturity. 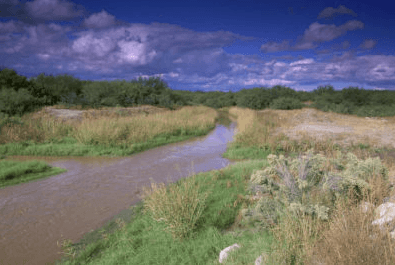 Scientists are unsure of why Yaqui catfish are struggling to survive in the San Bernardino refuge’s streams and ponds. STEVE HILLEBRAND/US FWS

The new study isn’t necessarily a death knell. Researchers continue to look for that missing factor, and recovery of the catfish could still happen with relatively little expense, says Radke. Researchers from both countries first need to locate intact, unhybridized catfish populations in Mexico. Rugged, inaccessible terrain — and occasional drug cartel violence — complicate the conventional practice of backpacking in the equipment for electro-shock sampling of remote water bodies.

So the plan, instead, is to travel light and merely take a small water sample from each site. Such samples inevitably contain microscopic amounts of shed skin, feces, mucus, and other bodily products from the fish swimming there. That may be enough for inexpensive genetic sequencing methods back in the lab to identify the fish species present, a non-invasive sampling technique known as environmental DNA analysis (or e-DNA). If researchers can find unhybridized fish, the next step is to get them into a dedicated hatchery and into a variety of protected habitats in both countries. “We can do this pretty inexpensively,” says Radke. “We’re not talking hundreds of thousands of dollars. We’re probably talking about tens of thousands of dollars.”

It’s worth the expense, he adds, because the Yaqui catfish is a part of the regional and national heritage, a traditional food source for indigenous people, and the potential basis for a recreational fishery. Its genome may contain traits — greater heat tolerance, for instance — that could provide a means to improve commercial fish farming of other species. The rising water table that benefits the catfish and other species has also benefited local agriculture and cattle ranching, says Radke. So it’s not a simple choice of species preservation versus the economy.

Worsening relations between the U.S. and Mexico could delay a cooperative effort to save the Yaqui catfish.

Above all, the Yaqui catfish is an important, albeit inadequately understood, part of the ecosystem. When you’re working on a car, “you don’t tear the hood off and start discarding parts,” Radke says. “Maybe you can get away without a part for a little while. But then, if you have an accident, maybe that’s the part that keeps you from going through the windshield. We don’t know what role the Yaqui catfish plays in the watershed, but I don’t think we know enough about our ecosystem to recklessly discard parts.”

The likelihood of recovery for the Yaqui catfish is, however, slim and getting slimmer. The failure of the effort so far could also easily become evidence for the contention by some critics in Congress that the Endangered Species Act does not work. The Trump Administration has also indicated its disinclination to protect imperiled species, moving earlier this month to delay the start of protection for the endangered rusty patched bumblebee, which has lost much of its habitat to large monoculture farms and development. Worsening relations between the United States and Mexico could also delay a cooperative effort to save the Yaqui catfish.

It’s still possible researchers will find intact specimens in Mexico before channel catfish have hybridized them out of existence. And maybe the water table in the San Bernardino refuge will recover fast enough to make a second restoration program there more successful. But with the predicted date of 2018 bearing down, the odds are that this piece of North America’s natural heritage will soon vanish forever, largely unknown and unmourned.