Jaguars Are Now Breeding Successfully In Argentina Without Assistance

“With jaguars now breeding successfully without assistance, the species is steadily making its way to a full recovery.” –Tompkins Conservation 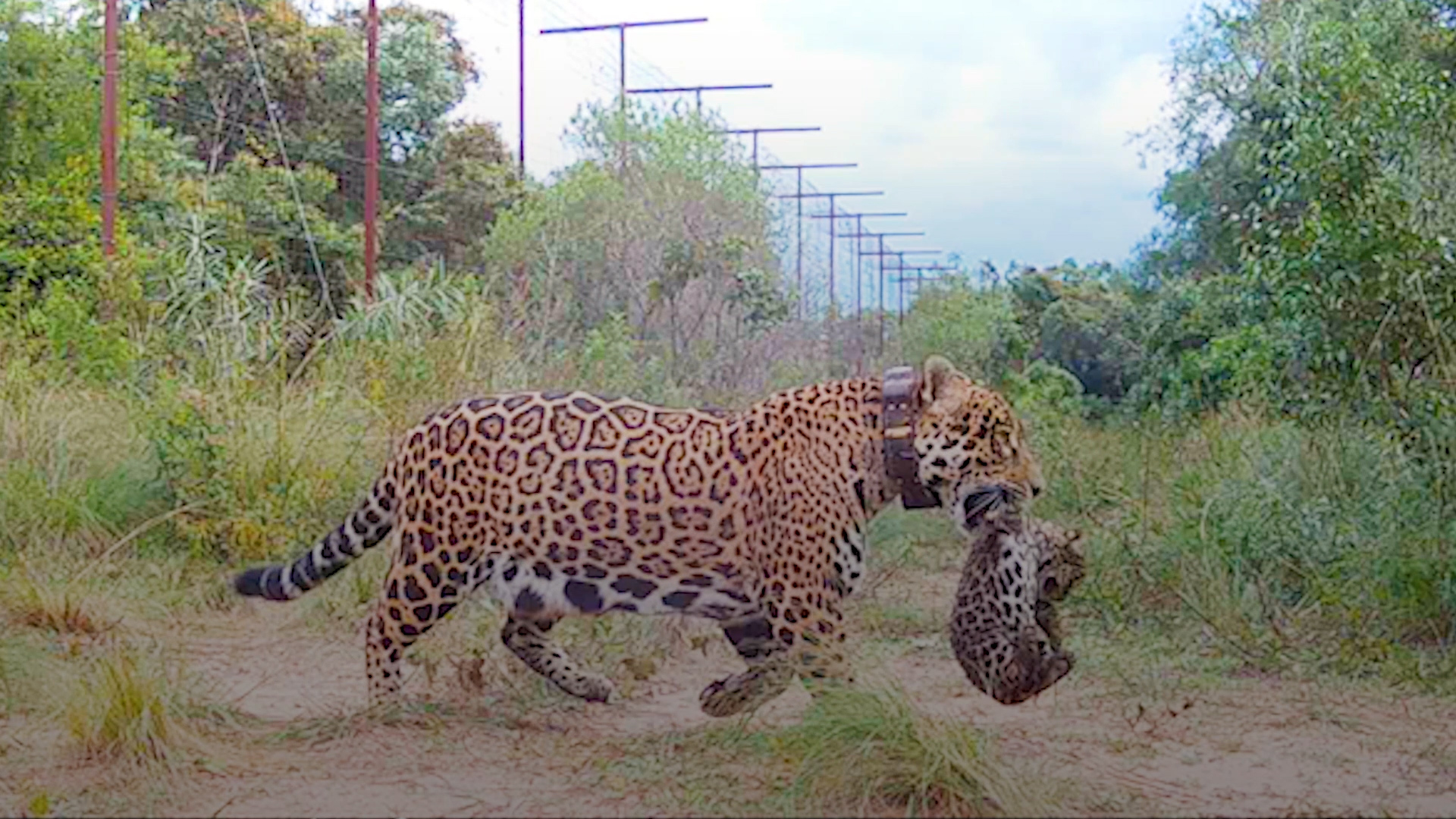 Arami carrying her cub outside the enclosure of the Jaguar Reintroduction Center.

BORN TO BE WILD: JAGUAR CUBS ARE BORN IN ARGENTINA’S IBERA WETLANDS

The first wild birth of jaguars has been documented after the species went locally extinct in Northeast Argentina’s Corrientes Province 70 years ago, the product of two jaguars from Rewilding Argentina’s first-of-a-kind rewilding program. After the recent release of jaguars, this news heralds the restoration of the top predator to the massive Iberá Park, one of South America’s key wetlands.

July 21, 2022—CORRIENTES, AR Camera trap footage reveals the birth of the first jaguars (Panthera onca) in the wild for Rewilding Argentina in the 1.8-million-acre Iberá Park. Their parents were released last year: Jatobazinho, a rehabilitated wild jaguar from Brazil, and Arami, the first jaguar cub born in 2018 at the Jaguar Reintroduction Center in the wetlands.

According to Sebastián Di Martino, Conservation Director of Rewilding Argentina, “The rewilding program seeks to recover the ecological functionality of the wetlands by bringing back missing species. As the top predator, the jaguar has a key role to play.” In Argentina, jaguars have lost over 95% of their original range. The jaguar program, which started in 2012, has successfully released eight jaguars into Iberá Park.

One of South America’s largest and most important watersheds, the Iberá wetlands suffered massive devastation in February, 2022, when wildfires burned 10% of Corrientes province, including 60% of ​​Iberá National Park. Rewilding, which helps restore natural processes, is an essential tool in helping the wetlands become more resilient in the face of climate catastrophes.

Key species, like the largest feline of the Americas, play a fundamental role in the structure and functioning of ecosystems; their return restores health and integrity, essential components that help mitigate the global loss of biodiversity, climate change and the appearance of pandemics. In Iberá, wildlife watching opportunities also help generate employment through nature-based tourism.

Kristine Tompkins, President of Tompkins Conservation and UN Patron of Protected Areas, celebrated the news. “I am overjoyed with the news that one of the two original jaguar cubs born at the reintroduction center has had cubs of her own. With jaguars now successfully breeding in the wild, the species is well on its way to recovering.”

The restoration of jaguars to the Iberá wetlands has been made possible by the collaboration between the countries of Argentina and Brazil, the Chico Mendes Institute for the Conservation of Biodiversity, the Federal University of Mato Grosso do Sul, the Campo Grande Wild Animal Rehabilitation Center, the Onçafari team at the Caiman Ecological Refuge, the Government of Corrientes, the National Parks Administration, Rewilding Argentina, its strategic collaborator Tompkins Conservation, and other philanthropists. Re: Wild is the fiscal sponsor of Rewilding Argentina.

Rewilding Argentina is working to bring back a number of species that play a crucial role in Iberá Park, a protected wetland of 1.8 million acres, among them the pampas deer, giant anteater, giant otter, the red-and-green macaw, collared peccary and the bare-faced curassow. In parallel, the nonprofit has helped develop a local economy of nature-based tourism, with 10 gateways to Iberá Park that offer visitor services and wildlife watching opportunities.

A driving force to curb the worldwide climate emergency and the biodiversity crisis, Tompkins Conservation has spent three decades working to rewild a healthy planet with big, wild, and connected landscapes where human communities, animals and plants can thrive. Collaborating with public and private partners, the organization has driven the creation and expansion of 15 national parks, including Iberá National Park, protecting 14.8 million acres.

Rewilding Argentina is an Argentine foundation created to confront and reverse the species extinction crisis, restore ecosystems’ healthy functioning, and promote local communities’ well-being. Formed in 2010 by Argentinian conservationists and activists and the offspring of Tompkins Conservation, Rewilding Argentina has donated over 400 thousand hectares to create seven natural parks spanning over 1 million hectares; it has helped protect 90 thousand square kilometers of the Argentine Sea, and is leading rewilding projects with over 20 extinct and endangered species in Argentina.

What is your snail mail address? G. V. Christensen

If you meant for Rewilding Argentina, looks like it is (according to their website):
FUNDACIÓN REWILDING ARGENTINA
SCALABRINI ORTIZ 3355 4J, CP 1425
BUENOS AIRES, ARGENTINA