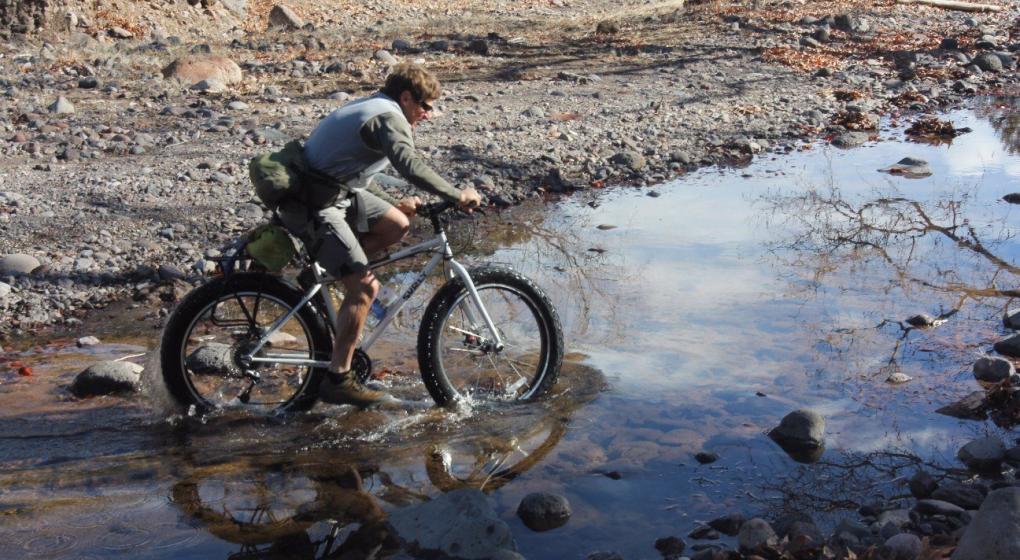 Over the next week, the explorer will certainly get that chance as he maneuvers solo through the wildlife corridor that spans southeast Arizona’s lofty and expansive Chiricahua Mountains.

As Davis passes along the Chiricahua’s Crest Trail, he will be surrounded by eight peaks higher than 9,000 feet – the biggest concentration of such massifs in Arizona. “I hope that I’ll be able to ascend a few of them,” says Davis.

The trek through the Chiricahuas follows close on the heels of the adventurer’s traversing of the nearby southern Peloncillo Mountains, another 30-mile hike through lower, but equally rugged terrain identified as the primary southwestern wildlife habitat connection between the remnants of the southern Rockies and Mexico’s Sierra Madre.

Including the Chiricahuas, Davis will have hiked, biked and ridden horseback 550 miles since the start of his transcontinental journey last January in Sahuaripa, Sonora.  Up to this point, he has made that progress with the help of no less than 40 co-trekkers ranging from scientists, conservation staffers, wildlife trackers, videographers and private landowners.

Davis’ most memorable experiences range from almost falling off a cliff on horseback in Sonora’s Northern Jaguar Reserve, to seeing multiple native mammal and bird species, and noting the devastating effects on wildlife migration posed by the U.S./Mexico border wall.

Davis can be available for media interviews by phone or in person during his treks and associated public events (next event is Silver City, NM on March 19). To schedule an interview, contact Kim Vacariu at 520-558-0165 (office); 520-390-3969 (cell) or kim@wildladnsnetwork.org. Leg 2 portion of TrekWest is sponsored by Western Wildway Network member organizations Wildlands Network, Defenders of Wildlife, Sky Island Alliance and Northern Jaguar Project.

See trekwest.org for detailed information on all Davis’ Mexico adventures, his colorful regular blogs, posts and tweets, trail route maps and a “Say Yes to Wildlife Corridors” petition to be delivered to U.S. decision-makers at the end of the trek by Wildlands Network.

Thanks to Susannah Smith (video) and Kelly Diedring Harris (interview).