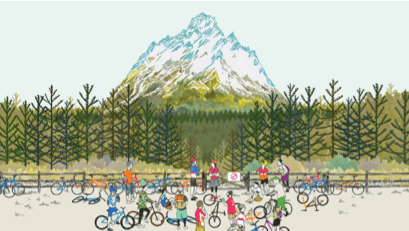 Keep Bikes Off Our Wilderness Trails

Palm Springs, Calif. — Some new threat is always trying to nose its way into America’s wilderness areas. Fierce battles have been fought over logging, mining and damming these last vestiges of our wild heritage. Now proposed legislation in Congress would allow bikes in wilderness.

This may not seem like a big deal. But the 1964 Wilderness Act forbids bikes and other forms of “mechanical transport” in federal wilderness areas. To allow in bikes would set a perilous precedent that would encourage further efforts to open up these wild places, threatening the very idea of wilderness that the law expresses: “where the earth and its community of life are untrammeled by man, where man himself is a visitor who does not remain.”

To keep wilderness this way, the law is strict, and there is no ambiguity over its ban on “mechanical transport.” The four agencies that administer the nation’s 109 million acres of wilderness — the National Park Service, Forest Service, Fish and Wildlife Service and Bureau of Land Management — interpret the law to prohibit bikes.

Yet leaders of the pro-bike effort, the Sustainable Trails Coalition, argue that lawmakers in 1964 never intended to exclude mountain bikes. They claim the law’s legislative history “shows that Congress would have wanted to allow bikes in wilderness if mountain bikes had existed or they had thought about them.”

The first mountain bikes were not widely sold until 1981, 17 years after the Wilderness Act became law. Undeterred, Utah’s Republican senators, Mike Lee and Orrin Hatch, no friends of wilderness protection, are sponsoring the Human-Powered Travel in Wilderness Areas Act. It would give federal land managers discretion to allow mountain bikers into wilderness areas. The agencies that oversee these areas oppose this.

No doubt it will only be a matter of time before enthusiasts of motorized all-terrain vehicles will be pressing their case for access to these areas.

Only very narrow exceptions supported by conservation groups now allow anything mechanical in federal wilderness areas: Rangers can use whatever it takes to rescue someone in trouble. Disabled people may use non-gasoline-powered wheelchairs. Snowmobiles and motorboats are allowed for subsistence hunting and fishing in Alaska’s huge wilderness areas.

The Sustainable Trails Coalition argues that since the Wilderness Act became law, “the world has changed.” The coalition also notes that horses are already allowed on trails inside these areas.

But travel by horse is a use that had a long tradition in many of these places before the 1964 law.

Ultimately, this is not really a debate about whether to allow bikes in wilderness, but whether we will allow the first incursion against a law that has held firm for 52 years to protect America’s disappearing wild heritage. Senator Lee has argued that his legislation is intended to “enrich Americans’ enjoyment of the outdoors by making it easier for them to mountain bike in wilderness areas.”

The two Utah senators sponsoring this effort have made no secret of their disdain for the federal government’s ownership and management of Western lands. They also support putting hundreds of millions of acres in the hands of the states and localities.

In New York State, however, the Adirondack Park Agency has allowed mountain bikes and motorized maintenance vehicles on old logging roads in two of the park’s “primitive areas” — Pine Lake and Essex Chain Lakes. Now the agency wants to continue to allow bikes, as well as maintenance vehicles to repair major damage to trails, after these roads are scheduled to be closed in the next few years. That proposal is incompatible with wilderness stewardship and should be rejected by Gov. Andrew Cuomo. There are ample opportunities for biking on hundreds of thousands of acres of state-owned land outside these areas.

And that really is the point. We set aside wilderness areas to protect them for what they are — wild places, untrammeled, as much as possible, by man, a reminder of what this country was like before Columbus set foot on this side of the Atlantic. There aren’t many of these places left, and we should leave them alone. They are our heritage, and the heritage of future generations.

But that doesn’t mean we can’t enjoy the outdoors on bikes or even off-road vehicles. There are plenty of other places to go to do that. In Moab, Utah, for instance, cash registers seem to jingle nonstop thanks to the abundance of outdoor recreation opportunities, including mountain biking. This is also true in the Adirondacks and across the United States.

We can have both. The Human-Powered Travel in Wilderness Areas Act should be stopped in its tracks.

Doug Scott is the author of the forthcoming book “Wild Thoughts: Short Selections by Great Writers about Nature, Wilderness, and the People Who Protect Them.”