Keep up the Pressure to Prevent Cruelty in our National Preserves

The Trump administration is working to roll back a 2015 National Park Service (NPS) rule that banned controversial hunting practices on 19 million acres of America’s National Preserves in Alaska, which includes millions of acres of Wilderness. We urge you to submit a public comment by Nov. 5 on the environmental assessment (EA) released in September.

The Action Alternative in the EA would reverse current NPS regulations prohibiting unethical and barbaric practices in our National Preserves and Wildernesses in Alaska. The Administration is trying to re-instate the following practices, which have no place in wildlife management, let alone in National Preserves:

Bears, wolves, and other native predators are an integral part of what makes these places truly wild. They should be free from human manipulation in these Preserves and their Wildernesses. Nature should be allowed to shape these wild places and natural processes should be allowed to determine wildlife populations and distribution.

Please submit a public comment by Nov. 5 opposing the proposed rollback of wildlife protections in America’s National Preserves in Alaska.

Please write in your own words, but consider including the following points in your comment letter:

Click here to submit your official comments before the November 5, 2018 deadline.

Thank you for taking action to help protect wildlife on National Preserves in Alaska!

Help us protect Wilderness and the wildlife that depends upon it. All first-time donations will be matched by a long-time member from Alaska! 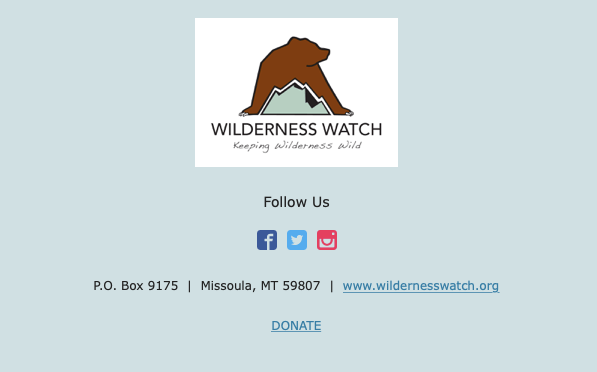