By Tim McNulty on May 30th, 2018 in Disruption vs. Renewal of Natural Processes, Pacific Wildway 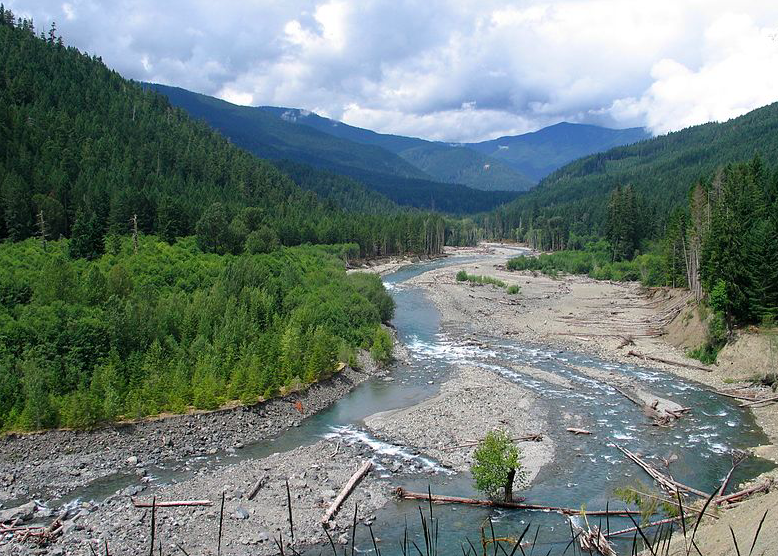 Letter to America, The Elwha: A River and a Vision Restored

Terrain.org: A Journal of the Built & Natural Environments

More than 200 feet below me, the blue-gray rush of the Elwha River cuts through the narrow walls of Glines Canyon on Washington’s Olympic Peninsula like a blade. I am standing on the remnant spillway of a concrete dam that spanned this gorge for nearly a century. The dam and its powerhouse are gone now, making way for the largest salmon recovery project in North America. Upstream the old reservoir basin rustles with autumn-tinged alder and willow saplings, and the newly freed river carves a channel through banks of lake-bottom sediments. It is late in the season. The first pulses of Pacific storms have swept over the Olympic Mountains, and the river is flush with runoff. Returning salmon have entered the river mouth and, keyed to the scent of upstream waters, begun their migrations to spawn. It’s an ancient passage for Elwha salmon, honed since the continental ice drew back from this valley some 16,000 years ago. But now, with the Elwha’s two dams removed, it is altogether celebratory and new.

Fall rains and the epic migrations of wild salmon have always filled me with hope. But this fall, on this river, I’m searching for more. Last November, my country took an abrupt political turn away from everything I believed in. Overnight, our incremental, upstream progress toward peace, fairness, environmental health, and human justice seemed blocked as by a concrete dam. If there is a way through this political blockade the story of the Elwha River might reveal it.

The Elwha is the largest of Olympic Peninsula’s watersheds, and the runs of wild salmon that once plied its waters were legendary. Estimated returns of more that 400,000 fish, including all species of Pacific salmon, flooded the river each year. This year-round bounty was the lifeblood of the Lower Elwha Klallam people. Their ancestral village of Tse-whit-zen dates back nearly 3,000 years. The tribe’s reservation at the mouth of the river is a testament to a people’s will to endure.

Early in the last century, when a blind belief in industry and progress held unchallenged dominion over the resource towns of the West, two hydroelectric dams were built on the Elwha. The dams powered a large sawmill and brought jobs, domestic electricity, and a modicum of prosperity to a burgeoning town. But the dams completely blocked migrating salmon, in flagrant disregard of existing law and treaty rights. Their effect on the Elwha Klallam people was devastating.

When I arrived on the peninsula in the early 1970s, the mills were going strong, and timber ruled the local economy. But the once-great salmon runs of the Elwha River were withering to a few thousand fish per year. In the words of my late friend Dick Goin, who moved here as a boy during the Great Depression and grew up subsistence fishing beside his Elwha Klallam neighbors, the Elwha River was dying.

In the intervening years I came to know the river well, working on trail crews for Olympic National Park, and on long summer backpacking trips up the valley. The Native American friends I worked with still drew part of their sustenance from the river’s depleted fishery. Memories of the pre-dammed river and its abundant fish lived on in their elders’ stories. When my friend Bruce Brown began to research the history of the river’s damming, I was all ears. Bruce’s 1982 book, Mountain in the Clouds, brought that story to a wide readership, and I and many other conservationists in the Northwest began to envision a different future for the Elwha.

Of course the Elwha people opposed the dams and challenged them for decades. The large mill powered by the dams sprawled over their former village site. In spite of the industrialization of their traditional territory, they never gave up on their river or its salmon. When the Glines Canyon Dam came up for relicensing, a legal avenue opened for addressing a century-old injustice.

The story of freeing the Elwha River has been well told in books, in newspaper and magazine stories, and films. The restoration is being rigorously documented by teams of researchers, and visitors from around the world come to witness the recovery. It’s no wonder. With the Elwha, hope, perseverance, and a shared vision for the future triumphed. What is also important to me now are the deeply polarized communities who came together to make it happen. As early as 1968 the tribe petitioned the federal government to consider the needs of fish in its relicensing process. It was nearly two decades after that that the Elwha Tribe and four conservation groups legally intervened in the process. I remember many meetings, contentious hearings, testimonies, articles, letters-to-the-editor—and more meetings.

Remarkably, the Elwha people remained strong throughout. In the face of dogged opposition, by corporate mill owners, local government officials, various economic development interests, and more than a few mill workers, the tribe remained focused. Their persistence, and a conservationist lawsuit brought against the dams’ owners, led to the compromise that resulted in legislation allowing the federal government to acquire and remove the dams if necessary to restore the Elwha fishery. That was 1992, and dam removal advocates celebrated wildly. Little did we know it would be another two decades before the dams came down.

This is the part of the story I returned to on the spillway that chilly autumn afternoon. In no small way, it meant listening to those who disagreed with me over dam removal. Much like today, economic forces were doing away with good paying jobs in the woods and mills of the Northwest. Automation, log exports, shifting markets, and the global economy had unmoored the Northwest resource economy. Mill workers and local government officials were justified to oppose what they saw as another attack on their way of life. We who advocated for ecological restoration needed to listen to those concerns and find ways to reach across our philosophical divides to address them.

Again, the Elwha people were exemplary. Compromise measures to supply alternative power to the mill at cost, to protect the community’s water quality during the dams’ deconstruction, and an agreement to stop fishing Elwha stocks during the recovery were worked out. Importantly, a working group of local community leaders came together to study and understand the larger scientific, economic, and ethical concerns that undergirded the restoration. I have to confess I was skeptical that such opposing perspectives could communicate, share ideas, and come to consensus. But they did. All sides listened. Concerns were assuaged, and with community support, congressional representatives were able to secure needed funds, and the removal proceeded. Not on schedule, not by a long shot, but in time. And what is time for a river, for a fishery, for a people?

As the lower reservoir was drawn down, a sacred place for the Elwha people emerged from a century’s inundation. “Coiled baskets” rock, the place of the Elwha people’s creation, is accessible again. And 70 miles of pristine spawning waters in the heart of Olympic National Park are once more open to salmon. A once-wild-eyed vision of a restored river is underway, unfolding by leaps and bounds with each spawning season. The greed and racial prejudice of an unenlightened time has been turned back, and a natural order restored. It happened within my fairly recent memory. It can happen again. 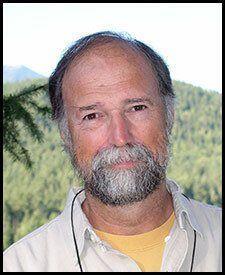 New Documentary: Taking the last stand for the Tongass

Dear Tim,
John Gussman of “Return of the River” fame has been my best guy friend for 49 years. I am ecstatic that he and Jessica produced a film that drew so much attention to the Elwha and its not-uncommon dilemma. I studied with the Pomo/Miwok tribes in my area of California and know how important such rivers and other natural resources are to their way of life. I also grew up in a pioneer farming and logging family and understand what such resources meant to them as well. Thank you for drawing attention to the Elwha as an example of how rewilding can benefit all of us.
Namaste 🐟🐟🐟🐟🐟🐟🐟🐟🐟🐟🐟