Man Swarm: the slaughtering of the world’s wildlife

A book review: Man Swarm and the Killing of Wildlife by Dave Foreman

Part 1 of 5: Humans devastating habitat and poisoning it

The Bible said, “Be fruitful and multiply, fill the earth and subdue it and take dominion over all living things on land and in the seas.”At the time of the Bible’s inception by a desert tribe known as the Jews in the Middle East, less than 100 million human beings walked the planet, give or take a few.  Humans used nets and spears to subdue fish, fowl and beasts. In 2012, as the human race thunders toward adding another three billion of its already prolific numbers to reach 10 billion by mid century—38 scant years from now, thousands of scientists have warned of our impending predicament. Nonetheless, we human earthlings plunder oceans, seas, air, land and water. 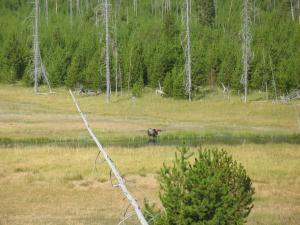 But what about the other “earthlings” numbering perhaps 30 million separate species around the globe?   What about their plight as humans maraud this planet by mercilessly killing habitat and poisoning the oceans? How many species suffer extinction daily around the planet?  Dr. Norman Myers, Oxford University, United Kingdom, substantiates 80 to 100 species end their time on this planet every day via human habitat encroachment.  Humans kill species at such a prolific rate that it is deemed the “Sixth Extinction Session.”  The first five sessions arrived as ice ages, meteors and other deadly events.

Harvard University biologist Dr. E.O. Wilson said, “The worst thing that will probably happen—in fact is already well underway—is not energy depletion, economic collapse, conventional war, or the expansion of totalitarian governments. As terrible as these catastrophes would be for us, they can be repaired in a few generations. The one process now going on that will take millions of years to correct is loss of genetic and species diversity by the destruction of natural habitats. This is the folly our descendants are least likely to forgive us.”

Long time conservationist Dave Foreman wrote a penetrating and compelling book: Man Swarm and the Killing of Wildlife. This book cannot be dismissed.  It cannot be ignored.  It cannot be put down once started.  Foreman shows the unraveling the wild world at the hands of humanity.  For anyone that thinks unlimited human growth can continue, this book knocks out all the myths perpetrated by economists, religious leaders and pro-growth advocates.

Foreman dedicates his book to his friend Hugh Iltis, “Whose stout heart and sharp mind has always seen that the population explosion leads to the death of wild things and the loss of wilderness.”

In my own media battles on the population/immigration/environmental front, I have had to contend with big time radio talk show hosts who support unlimited growth, i.e., Ernest Hancock of www.freedomphoenix.com .  Top television news personalities such as Diane Sawyer and Charlie Rose will not touch the subject, but report about the consequences—never making the connection.  Newspapers like the Denver Post’s Vince Carroll remain convinced that unlimited growth is beneficial. The Los Angeles Times encourages as much growth as possible even as California chokes on its toxic air, gridlocked highways and crumbling infrastructure. It adds 1,700 people daily and 400 vehicles.  Even small town newspaper editors like Jonathan Thompson of the High Country News advocate for unlimited growth. Bob Shieffer of “Face the Nation” and David Gregory of “Meet the Press” scamper away from the topic like gazelles. Every National Public Radio host avoids the topic at all costs. Only last year did Thomas Friedman finally write, “The Earth is full.”

From my own work, I unequivocally state that human overpopulation in America and around the world is the most evaded, avoided, ignored and suppressed issue of our time.  It’s also the most dangerous predicament of our time, but don’t let that stop us from increasing our numbers at breakneck speed.

“We must alert and organize the world’s people to pressure world leaders to take specific steps to solve the two root causes of our environmental crises – exploding population growth and wasteful consumption of irreplaceable resources. Over-consumption and overpopulation underlie every environmental problem we face today.”   Jacques-Yves Cousteau, Oceanographer While you may hear a lot about “carrying capacity”, you never hear about carrying capacity for all the other creatures on our planet.  It’s like they don’t exist or are unimportant.  Foreman loves wild things and I love them, too.

Foreman writes, “We have come on like a swarm of locusts: a wide, thick, darkling cloud settling down like living snowflakes, smothering every stalk, every leaf, eating away every scrap of green down to raw, bare wasting earth. It’s painfully straightforward.  There are too many men for Earth to harbor…we are crippling Earth’s life support system by such a flood of upright apes is bad news for us.”

Dave Foreman’s book will rock your senses. It will affect your children. It will change all life on this planet if humans continue their endless onslaught around the globe.

Frosty Wooldridge has bicycled across six continents – from the Arctic to the South Pole – as well as six times across the USA, coast to coast and border to border. In 2005, he bicycled from the Arctic Circle, Norway to Athens, Greece. He presents “The Coming Population Crisis in America: and what you can do about it” to civic clubs, church groups, high schools and colleges. He works to bring about sensible world population balance at www.frostywooldridge.com He is the author of: America on the Brink: The Next Added 100 Million Americans. Copies available: 1 888 280 7715

I made it a great way across US once — went from San Luis Obispo CA to Kokmo IN. But, only did it once with my father and younger brother. You must be some sort of superman to have done all the cycling you have done! Keep up the good work on immigration.