By Rewilding on September 5th, 2016 in Rewilding News 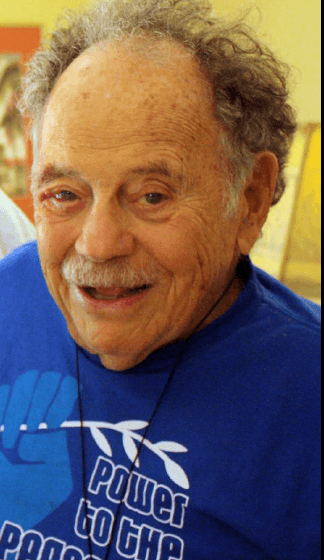 From the last edition of Michael Frome’s Portogram published September 5, Michael says, “It’s been great fun, I’ve enjoyed it very much, and I send my best wishes to all my friends and followers.

Michael Frome has been well known as author, educator and tireless champion of America’s natural heritage. The late Senator Gaylord Nelson of Wisconsin, the father of Earth Day, said of him, “No writer in America has more persistently and effectively argued for the need of national ethics of environmental stewardship than Michael Frome.”

Over the years Michael has been a featured columnist in Field & Stream, Los Angeles Times, American Forests and Defenders of Wildlife. He has written over twenty books, including one of his latest, Heal the Earth, Heal the Soul andhis biography, Rebel on the Road—and why I was never neutral. His other books include Greenspeak, Green Ink, Battle for the Wilderness, Regreening the National Parks, and Strangers in High Places.Late in 2012, twenty of his former students published Letters to Michael—Reflections on Life by former students of Michael Frome. Niels Nokkendtved, the editor of Letters, wrote in preface, “What impressed me the most about Michael are his patience and his willingness to share the wealth of his own experience.”

Michael Frome was born in New York City May 25, 1920, the son of William and Henrietta (nee Marks) Fromm. He changed the last name to Frome when he was nineteen. After high school he attended City College in New York. During World War II he trained as a navigator and served in the US Air Force Air Transport Command, flying to distant corners of the world.

He began his writing career as a newspaper reporter for the Washington Post and later served as successful travel writer for major magazines and newspapers before concentrating on the environment and the out-of-doors.

In June 1949 he married Thelma Seymour. They had two children William Carroll Frome of Dallas, Texas and Michele Lloyd Frome of Silver Spring, Maryland. Michael and Thelma separated amicably and divorced in 1981.

After years as a journalist, he began a new career in higher education, teaching at the universities of Idaho and Vermont, Northland College (Wisconsin) and Western Washington University, where he directed a
pioneering program in environmental journalism and writing. He earned a doctorate in 1993 from the Union Institute and University (which in 1999 named him Outstanding Alumnus of the Year).

On New Year’s Eve 1994 he married the Reverend June Eastvold, Pastor of University Lutheran Church, Seattle. In due course both retired and in 2004 they moved to Port Washington, Wisconsin.

He retired in 1995 from the faculty of Western Washington University. The University of Idaho established in his honor the Michael Frome Scholarship for Excellence in Conservation Writing. Among other honors are the Wilderness Writing Award from the Wild Foundation, the Thomas Wolfe Memorial Award (for his work on behalf of national parks), and the 1980 award from the American Society of Journalists and Authors for the best magazine article

of the year (“The Un-Greening of the National Parks”). In 1994 the Outdoor Writers Association elected him to its Circle of Chiefs for distinguished conservation writing.

Michael’s most recent publication from the University of Utah Press was published last year. It was titled Rediscovering National Parks in the Spirit of John Muir.

Michael is survived by his wife June, children: William Frome, Michele (Bill Taylor) Frome, Fjaere (Francis) Mooney, Kjersti (Kathy Moore) Nilssen and Carl (Betty) Nilssen. Grandchildren: Molly, Audrey and Greta Nilssen. Michael is further survived by other relatives and friends. He is preceded in death by his parents, brother Marvin (Mollie)Fromm.
A Service to celebrate Michael’s life will be held on Saturday, September 10, 2016 at Advent Lutheran Church W63 N642 Washington Ave. Cedarburg, Wisconsin 53012 at 2:00 PM. Visitation will be held from 12:00 PM until the time of service at 2:00. Pastor Jon Magnusen and Pastor Ed Ruen will officiate.

Thanks so much for posting this, Susan.

Of course, Michele. Your father a special friend to many of us, and he clearly spoke for Wilderness and National Parks. We send loving condolences to you and the family.

I remember attending meetings that included Stewart Brandborg and Rupe Cutler in the Wilderness Society’s office in Washington DC ca. 1968. He was a major influence on my own wilderness advocacy.