By George Wuerthner on May 11th, 2021 in Featured, Spine of the Continent (Western) Wildway 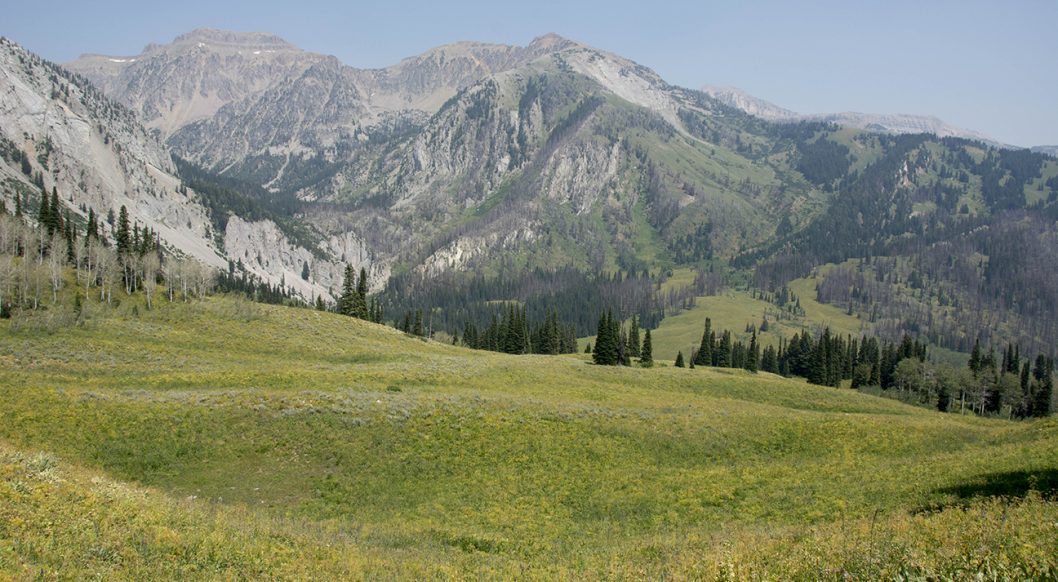 The Northern Rockies Ecosystem Protection Act (NREPA), H.R.1755, was introduced into 117th Congress by Representative Carolyn Maloney of New York. A companion bill sponsored by Senator Sheldon Whitehouse of Rhode Island was placed in the Senate.

NREPA is big, bold, and wild. 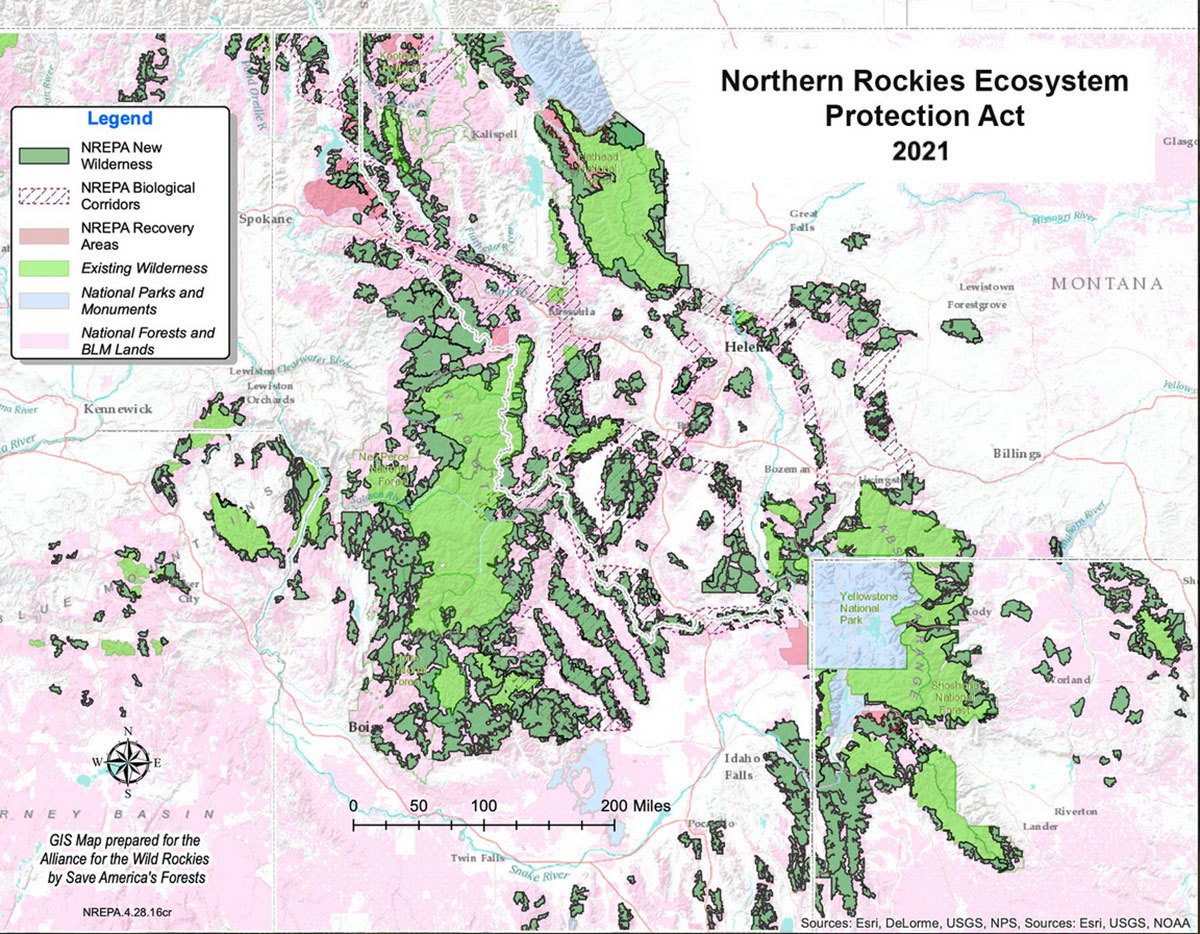 NREPA would designate 23 million acres of new Wilderness and protect 1,800 miles of rivers under the Wild and Scenic Rivers Act. These lands and waters are some of the wildest and most critical wildlife habitats left unprotected in the lower 48 states.

Among the outstanding landscapes included for protection in NREPA in Montana are the Gallatin Range south of Bozeman, the Crazy Mountains by Livingston, the Pryor Mountains by Billings, the Whitefish Range west of Glacier National Park, the Badger Two Medicine area south of Glacier National Park, the Great Burn area and Sapphire Range by Missoula, and the Snow Crest and Gravelly Range east of Dillon. 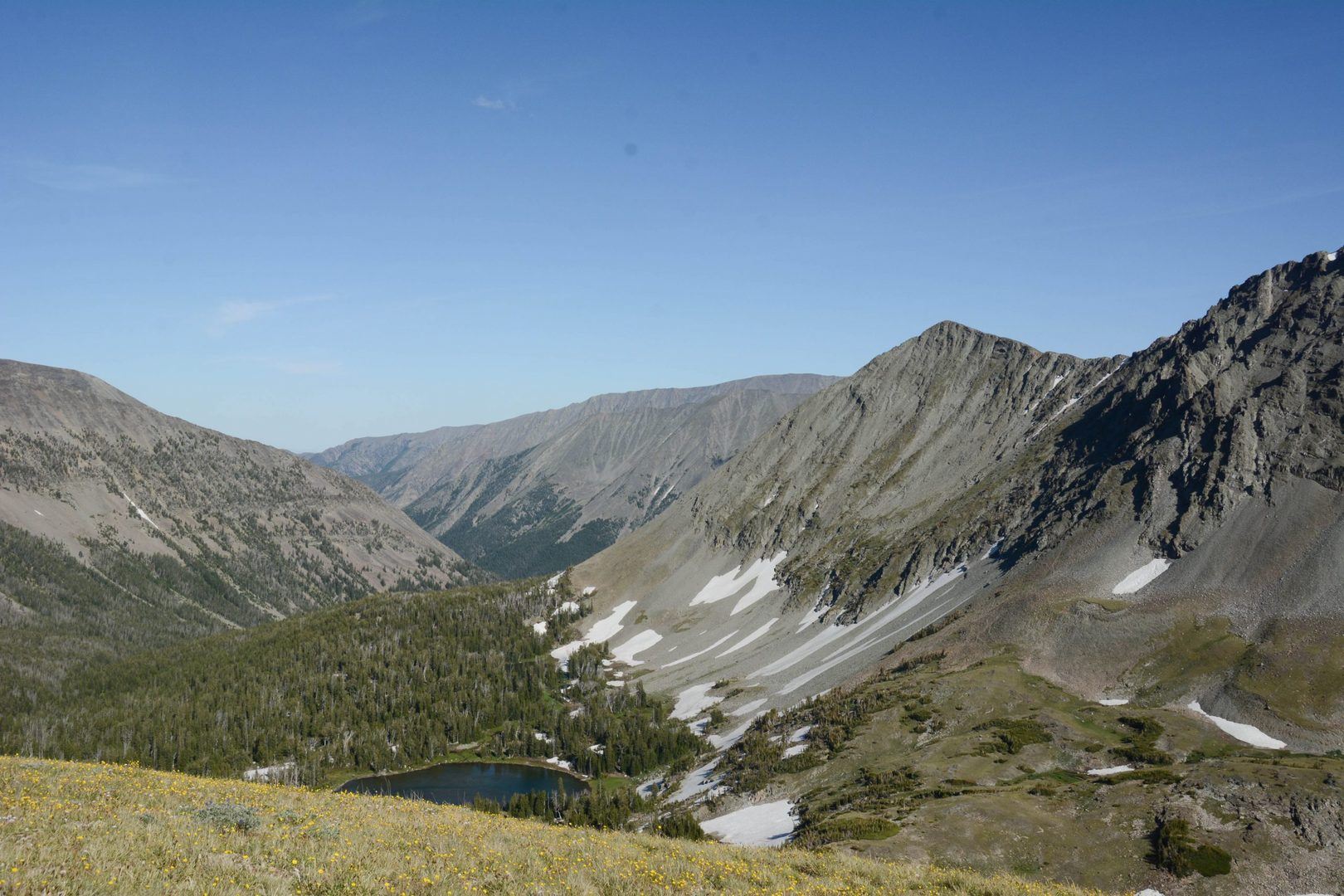 In Idaho, among the many important roadless lands that are included in NREPA are the Pioneer Mountains east of Sun Valley, the Lost River and Lemhi Ranges south of Challis, and the Caribou Range near Idaho Falls. In central Idaho on the vast Nez Perce-Clearwater National Forest, NREPA would designate Meadow Creek, the Bighorn Weitus, and Mallard Larkin areas as Wilderness. In northern Idaho, the Selkirk Mountains and Scotchman’s Peak areas near the Canadian Border would finally garner federal Wilderness designation.

Wyoming also has its share of proposed new Wilderness such as the Wyoming Range and Salt River Range south of Jackson. Other areas to be protected near Jackson include the Mount Leidy Highlands, Palisades, and Shoal Creek areas. Additions to the Washakie and North Absaroka Wildernesses by Cody, as well as additions to Wilderness Areas encompassing the Wind River Range and Bighorn Mountains, are also included in this legislation.

In eastern Oregon, NREPA would protect much of Hells Canyon and the Elkhorn Range as well as important additions to the Eagle Cap Wilderness.

In eastern Washington, the Kettle River Range and Salmo Priest areas would get deserved Wilderness designation. 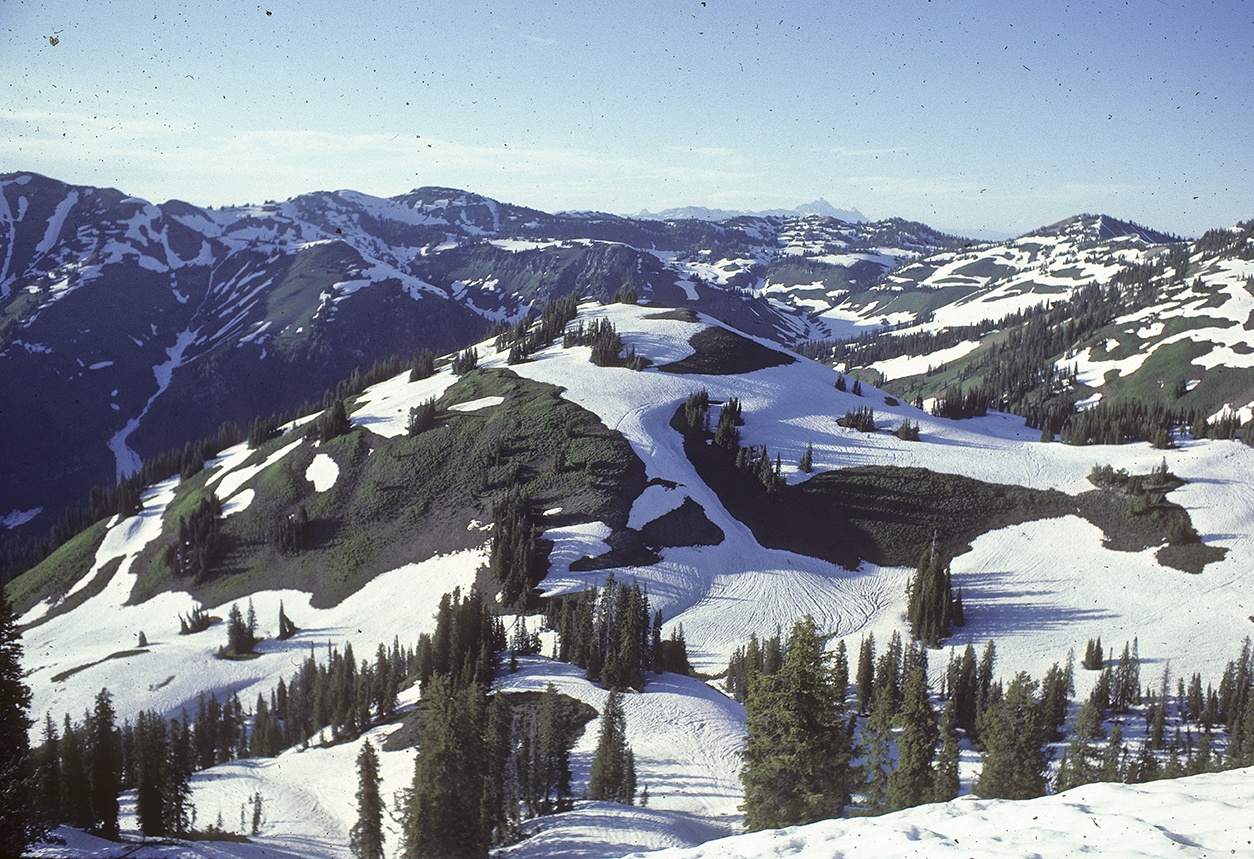 The ecological value of this protection cannot be overstated. NREPA would preserve critical habitat for sensitive or endangered wildlife, including bull trout, lynx, wolverine, grizzly bear, bighorn sheep, sage grouse, wolves, and numerous other species that are candidates for listing or already listed under the Endangered Species Act.

NREPA would also create protected corridors that will ensure that wild animals and plants have a chance to move or migrate in response to climate change and ensure genetic interaction between isolated populations.

Currently, forest lands in the United States annually sequester 10-20 percent of the carbon emissions produced by human activity. The enactment of NREPA would go a long way toward creating massive carbon reserves by putting much of the public forests in these states off-limits to logging. Giant old-growth trees store much of the forest carbon. One recent study suggests that the largest 3% of trees store 42% of the carbon.  NREPA will protect the remaining old-growth forest in the region. 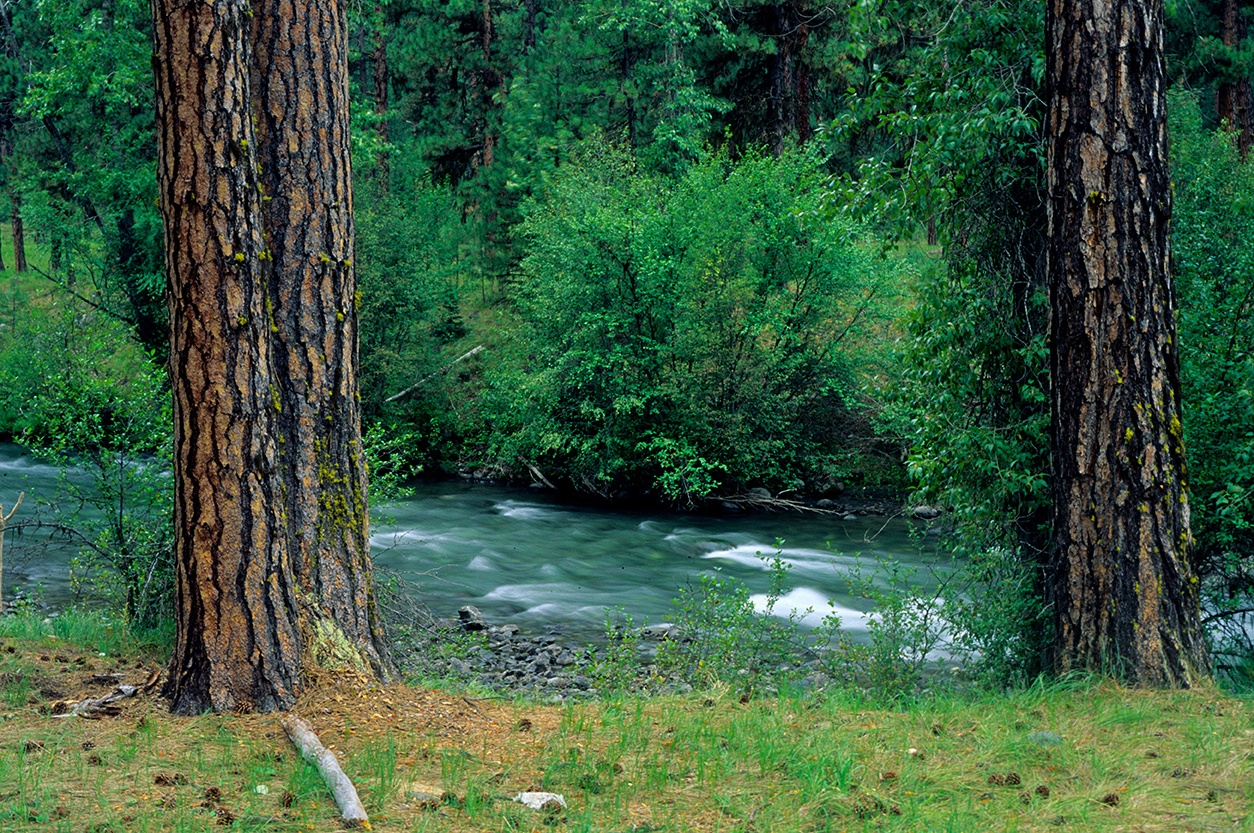 For instance, in Oregon, the biggest source of greenhouse gas emissions comes from timber harvest and is even more significant than the state’s emissions from all transportation sources. Numerous studies have shown that logging/thinning releases much carbon, whereas intact forests sequester and store carbon.

Even forests charred by wildfire store far more carbon than logged areas. The snags and boles left after a fire consist of carbon, and are important habitats for many species, including black-backed woodpecker, that depend on snag forests for their survival.

Protecting rivers from dams by Wild and Scenic River designation will ensure natural flow regimes critical to many aquatic species, from white sturgeon to cutthroat trout. 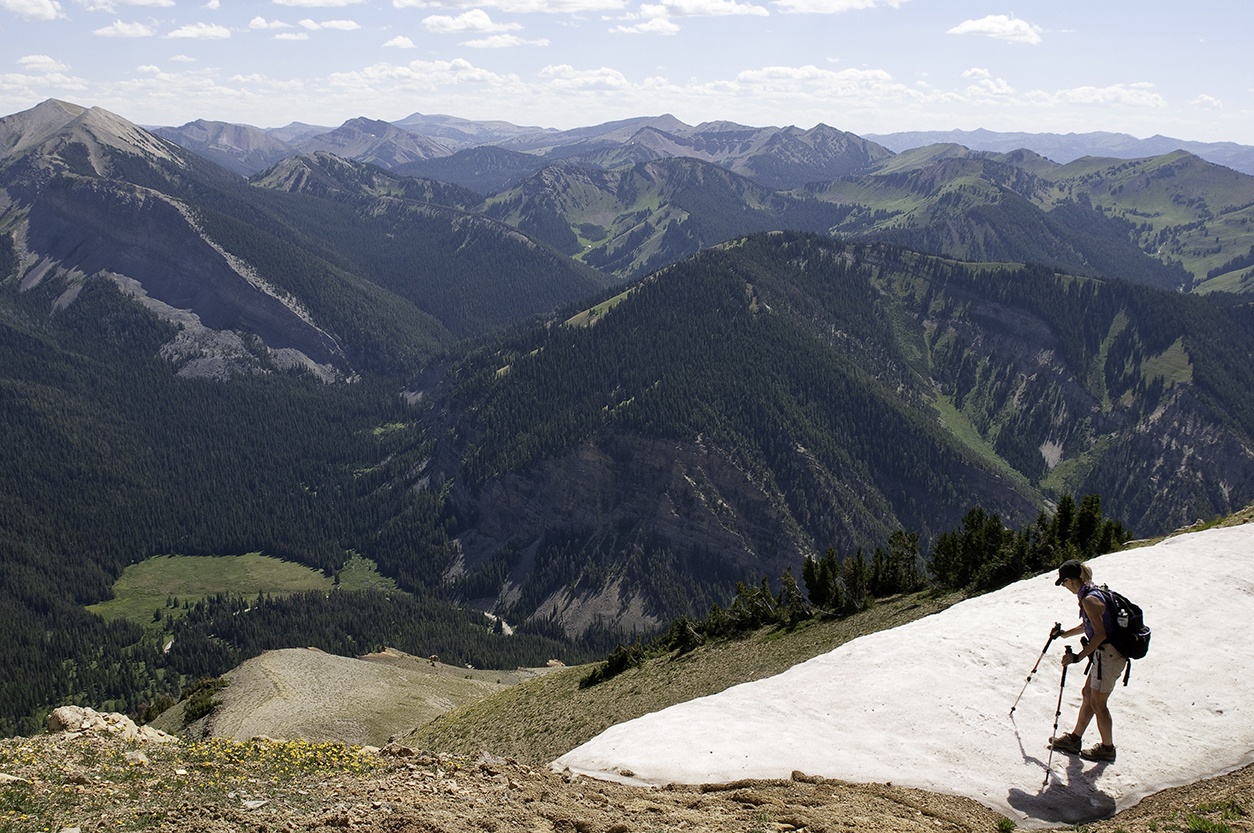 In many parts of the West, there has been a transition from natural resource exploitation industries, particularly mining and logging, to economies that depend on quality-of-life attributes. For many people having outdoor recreational opportunities close at hand is essential to their sense of well-being.

Due to these factors, we have seen a tremendous migration to towns and cities in the region drawn by the outdoor amenities available. The Covid pandemic has accelerated this shift in demographics. More and more people have learned to work from home or remotely, meaning they can choose to live where they feel there are numerous natural amenities. NREPA would protect these amenities.

It’s about our children. Numerous studies have demonstrated that students with frequent access to the outdoors improve health, social skills, and school performance.

In addition to preserving the foundation for the new economy, NREPA also requires the restoration of previously logged lands and other ecosystem recovery actions that will create jobs for loggers, heavy equipment operators, and others who once relied on the extractive industries. 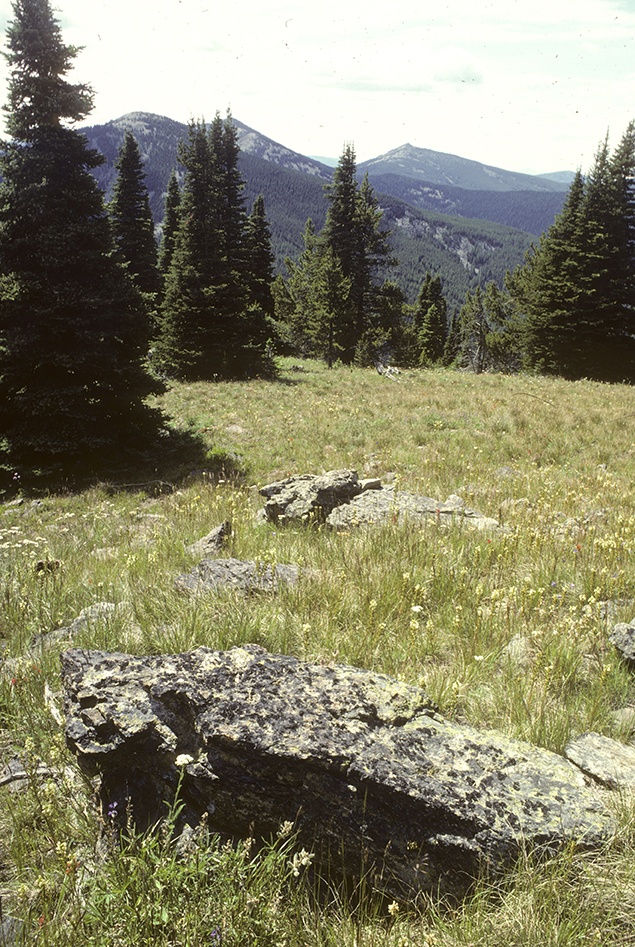 In recent decades, scientists and conservation groups have called for creating a significant network of protected lands. Starting in the 1990s, the Wildlands Project outlined a network of protected wildlands across the continent. More recently E.O. Wilson, the esteemed biologist, published his book Half-Earth calling for the preservation of half of the Earth for Nature. The newly elected Biden Administration has endorsed the 30 x 30 proposal which would protect 30 percent of United States lands and waters by the year 2030.

Each of these initiatives, in its way, provides philosophical and scientific support for NREPA. The enactment of NREPA would go a long way toward preserving what is best about the Northern Rockies and contribute to these lands’ long-term stability.

The Northern Rockies Ecosystem Protection Act is more than legislation. It is a recognition that we have an obligation to protect at least some of our nation’s landscapes for future generations, of wildlife and people.

NREPA signals a humility toward the land and acknowledges that we must put some of the planet off-limits from human exploitation. NREPA is a way to preserve our nation’s natural heritage and demonstrate a new commitment to life outside of human societies.

With the Biden Administration’s more enlightened attitude toward our public lands, there is reason to hope that NREPA legislation will get a fair hearing in Congress and be passed into law. I can assure you that the grizzlies, elk, wolverine, lynx, bull trout, sage grouse, and other critters are hoping I’m right. 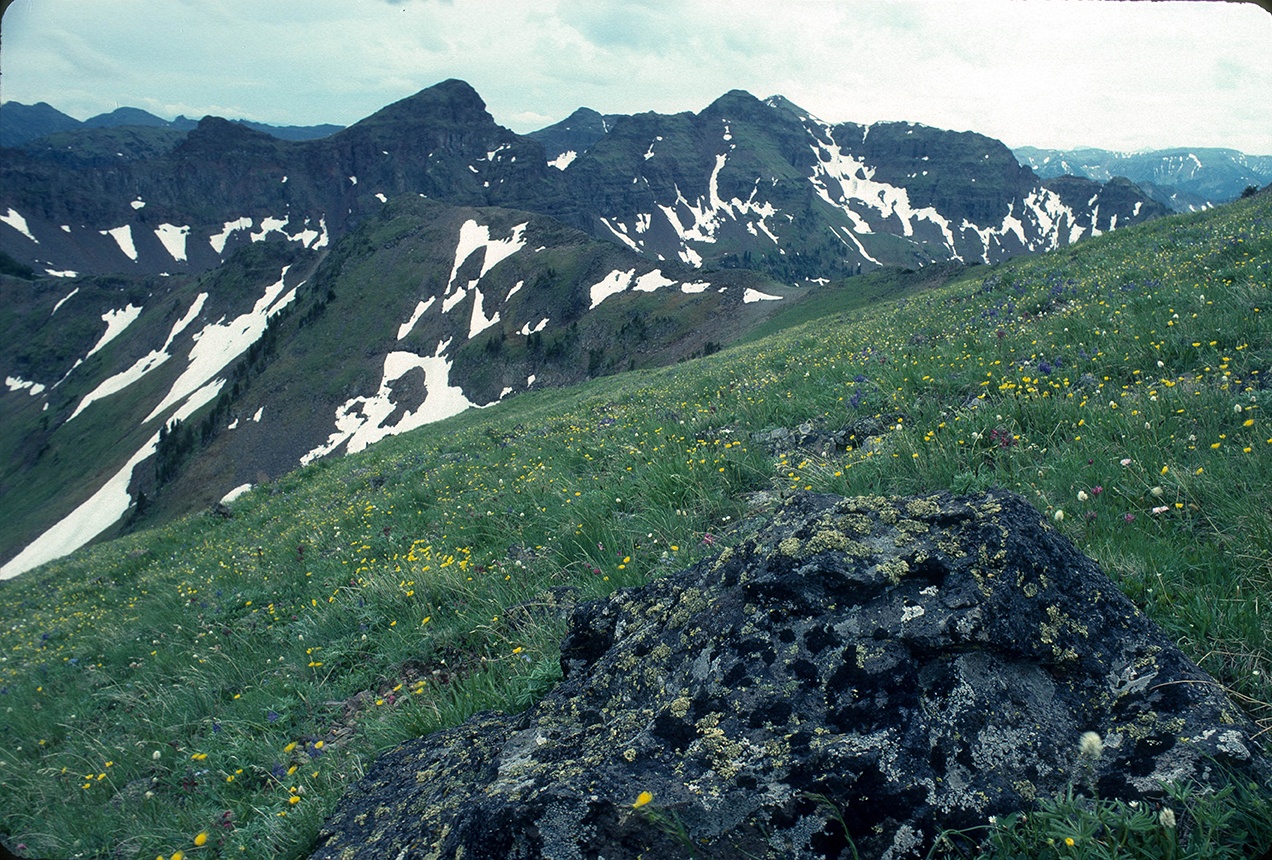