Re-Bisoning the West: Restoring an American Icon to the Landscape

Kurt Repanshek has written a book that should encourage and give hope to all who are interested in rewilding North America. Re-Bisoning the West is an optimistic assessment of prospects for restoring Bison bison, driven nearly to extinction in the late 19th century, in the Great Plains of America.

Repanshek offers many reasons for his optimism which, as he points out, is not only his view of the prospects for bison, but also that of experts. He quotes the Vermejo Statement that emerged from meetings of wildlife biologists and conservationists in 2006 and 2007:

Over the next century, the ecological recovery of the North American bison will occur when multiple large herds move freely across extensive landscapes within all major habitats of their historic range, interacting in ecologically significant ways with the fullest possible set of other native species, and inspiring, sustaining and connecting human cultures.

Such an ecological recovery is no small order, as Repanshek repeatedly admits, but he has traveled the Great Plains and documents the work being done by private groups, Native American tribes, and government agencies that support the contention that bison, once so near extinction, can be restored to a significant portion of their range in the plains.

The book begins with background: paleontological evidence of early bison in North America; how Bison bison survived the late Pleistocene great extinction; early human “idolization, and reliance upon” bison; and the importance of bison to Native American communities on the Great Plains. Repanshek describes the landscape of the bison, then asks why we should bother restoring them. His answer:

Because they belong there. They once were an integral part of the landscape. They evolved with it, tilled it, manipulated it, engineered it. They were then, and remain today, ecological engineers. They mow the land differently than domestic livestock, often in a healthier fashion than if they are left alone. Bison don’t graze as hard as cattle; instead, appearing finicky, they browse and move frequently . . . . Bison also tend to pass over forbs, a choosiness that increases plant diversity. They spend less time than cattle around water sources, and so don’t trample riparian areas or graze the surrounding vegetation down to the ground. All things being equal, cattle will spend hours around water; bison take a drink and move on.

The next two chapters explain first, current difficulties in expanding genetically pure conservation herds (they are considered livestock rather than wildlife), and how, in the familiar story of the “Great Slaughter,” the species was reduced to virtual extinction.   Some may see as ironic that bison were then rescued by hunters and ranchers, and Repanshek describes the roles played by four prominent figures in bison rescue: Charles “Buffalo” Jones, Theodore Roosevelt, William Temple Hornaday, and Charles Goodnight. The first three were the hunters who in various ways contributed to bison conservation, the latter a rancher. They played different roles, but their work resulted unexpectedly and somewhat unintentionally in protection of enough bison not crossed with cattle to allow survival of Bison bison as a species. 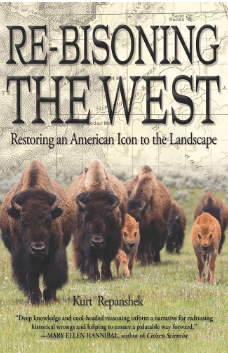 Genetics plays a central role in bison conservation, and Repanshek explains why this is important and how genetically “pure” bison survived the haphazard process of protecting the few bison left after the “Great Slaughter.” Why, with such a small population left in the late 19th century, did the survivors not suffer from inbreeding? “Their squeeze into, and healthy exit out of, the bottleneck was an anomaly, as inbreeding frequently occurs when populations dwindle,” writes Repanshek. Current examples of this problem involve Florida panthers and the Mexican wolf, among other species. The answer seems to be that there were enough small herds scattered around the country and in Yellowstone to assure sufficient genetic variation to avoid the effects of inbreeding when the recovery process was launched. Repanshek explains where those private herds were and how they were gathered. Whatever happened, careful genetic analysis of herds being built today reveal Bison bison to be very resilient and flourishing.

Repanshek is a journalist, an expert on national parks and public lands, and founder and manager of the highly respected website National Park Traveler that reports on national parks. He takes the reader into the field where he interviews many players in the current efforts to build bison herds and habitat. Yellowstone National Park was critical to bison protection from the beginning of the effort, Wind Cave National Park more recently as well. Big Bend National Park, Valles Caldera National Preserve, and Grand Sand Dunes National Park and Preserve, he suggests, may in future be important to the effort. National grasslands may also play a role, and they include millions of acres of public land. Much is also happening outside national parks. Native Americans are a very important part of the story today, and the Blackfeet Nation, Cherokee, Assiniboine and Sioux on the Fort Peck Reservation, Eastern Shoshone and Northern Arapaho on the Wind River Reservation, and the InterTribal Buffalo Council comprised of over sixty federally recognized tribes, are all working to restore the bison. The tribes have millions of acres on which bison can thrive.

Add to these the efforts of private conservationists. Repanshek visits the American Prairie Reserve in north central Montana where the goal is to thread together 3.5 million acres across which bison may roam freely. Much of this is public land, and American Prairie is buying land as it can from willing private landowners, but there are obstacles. There is the usual local opposition from ranchers who run cattle there, mostly on public land, and another is a recalcitrant Montana government which classifies bison as livestock – more on that in moment. Repanshek interviews Reserve superintendent Damien Austin who testifies to the project’s success so far. “The things that we’re doing with bison and the idea behind acquiring the land is something that happens on a daily basis in the state of Montana. We’re not asking to change the rules or for special exceptions. We’re operating within the private property rights and within the BLM grazing system.”

American Prairie Reserve and a smaller effort in southeast Colorado, the Southern Plains Land Trust, are described as private efforts that are making progress. Conservation herds are growing in both places, but the effort in Montana faces two problems that Repanshek describes at some length and which seem especially galling. One is the position of Montana on the threat of brucellosis and all the procedures that must be followed before bison from the Yellowstone herd can be shared with other herds. Quarantine procedures require five years and in the view of many are too long and even unnecessary. The other is Montana’s ruling that bison are stock and not wildlife.
Repanshek writes:

In Montana, bison such as those now free on APR’s land are considered livestock, not wildlife. At the [Charles M. Russell] Wildlife Refuge, [with which the APR might pair in blocking land for bison] the guiding mission is to manage the land to benefit native wildlife. It would seem that bison would be a good fit on the refuge, but their current classification as livestock is problematic. “Right now we’re working on this cooperative blended landscape,” Austin answers when I ask him about the livestock-wildlife issue. “We’ve managed to work with the BLM and the state of Montana in order to get bison to graze on the land. And to date we have not had that on the CMR. So it definitely is something a little trickier, with the classification of bison right now and the wildlife refuge’s mandate for managing wildlife.”

Repanshek calls this situation “enigmatic” because there are bison on other units of the national wildlife refuge system, and moose, elk, and deer are not classified by Montana as livestock. What’s behind the enigma? Earlier in the book Repanshek makes the case that there is a bias against bison, a product of a long history which elevated cattle, the introduced domestic ungulate, over bison, the native wild ungulate . Ranchers wanted bison out of the way so they could graze cattle, and they don’t want them in the way now. Ranchers are powerful in Montana, and that seems to be the politics of this enigma.

Re-Bisoning the West is a very readable, accessible, informative, and eye-opening report on the state of this iconic animal in the American West. Repanshek recounts familiar stories about the decline and near extinction of the bison and brings us up to date on progress and challenges in the century-long story of its rebound. He is a reporter and an advocate because he believes that returning bison to the prairie wherever possible will not only be good for the bison but for the ecological health of the prairie, for the Native American people for whom the bison has been and is critically important culturally and economically, and for everyone, even perhaps for ranchers in the long run, who can husband commercial herds on healthy landscapes while conservation herds restore national parks, grasslands, and even the economies of declining prairie communities.

Kurt Repanshek is a reporter, but also a scholar, an outdoorsman, and an excellent writer. As he does with his website, he analyzes, summarizes, and synthesizes a vast amount of material to tell the story of Re-Bisoning the West. Some readers may want more detail, and he provides a rich resource of endnotes for those who wish to dig deeper into aspects of the story he tells. This book, along with others recently published about public lands in the American West, will hopefully attract attention to what for many is “flyover” country. It’s flat, and there may not seem to be much of interest down there, but as this book attests, much good is happening on the prairies of America that should be of interest to and championed by the American people.