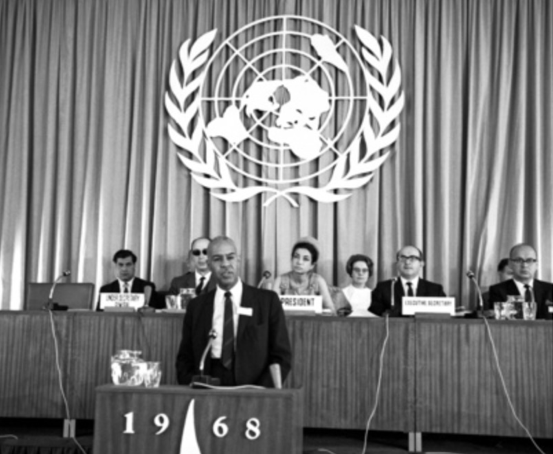 It is good to review a small chapter in the history of family planning and to remember that family planning has been recognized as a human right for half a century. In addition, I take a look at how a theocracy has had effective control over family size.

The concept of universal human rights started after World War II with the United Nations. Its charter included the obligation “…to promote… universal respect for, and observance of, human rights and fundamental freedoms for all without discrimination….” The Tehran conference was held 23 years later to define what those rights are. One of several points states:
“The protection of the family and of the child remains the concern of the international community. Parents have a basic human right to determine freely and responsibly the number and the spacing of their children”

The 84 countries attending this Iranian conference agreed to be bound by the decisions, but the world has changed radically since then. For one thing, there are more than double that number of countries. Furthermore, global population has more than doubled from 3,600,000,000 to 7,500,000,000 people. On the good side, there are more, safer and more effective methods of contraception available. The right to family planning is supported by many programs, including FP2020 which works in many developing countries. Planned Parenthood and the federal Title X (ten) program in the USA are under jeopardy because of a proposed law limiting healthcare providers from mentioning the word “abortion”.

Unfortunately the right to family planning is being limited or taken away in many countries. Funding for many organizations working internationally has been barred by the Global Gag Rule. The GGR prevents the US from funding any foreign agency that provides abortion services anywhere—or even mentions the word “abortion”. Because of the lack of these services women will go without birth control and there will be millions of unplanned pregnancies, and thousands of women will die from complications of pregnancy—and, ironically, there will be more abortions!

The Tehran Proclamation has 9 standards to uphold the human right to family planning. These include non-discrimination, availability of information, accessibility of services and supplies, quality, autonomy of decision making, privacy and confidentiality. I am happy to report my experience has been that these standards are upheld everywhere I have worked.

It is difficult to envision a UN conference being held in Iran now—there have been many changes since 1968. The Shah was overthrown in 1979 and the country became an Islamic theocracy, lead by a “Supreme Leader.” A pleasant surprise came about a decade later.

High level government and university experts held a conference in 1988 to discuss Iran’s population, which was increasing rapidly at that time. Attendees agreed “…that the rate of population growth in the Islamic Republic of Iran was high and this would have a negative effect on the welfare of the people. Hence, the participants strongly urged the Government to set up a family planning programme and integrate population factors in policy-making.” (quoted from “A New Direction in Population Policy and Family Planning in the Islamic Republic of Iran”)

The High Judicial Council of Iran decided “family planning does not have any Islamic barrier” so long as abortion was not involved. New laws were passed to promote small families. Couples were required to take birth control classes before they could get a marriage license. Government clinics were set up offering a wide choice of methods, including vasectomy. In addition, the government discouraged childbearing before age 18 and after 35 and recommended that children be spaced 3 or 4 years apart. The family planning program urged couples to have no more than 3 children; government employees lost some of their benefits, such as maternity leave and food coupons, if the family had more than 3 children.

The TFR (the average number of children that a woman bears in her lifetime) in Iran had been as high as 7.0, had decreased to 5.5 in 1988 and now is less than replacement at 1.8—the same as the USA. It doesn’t mean that population is shrinking—there are millions of children and teens whose reproductive years are still ahead of them—so it will take decades before the population stabilizes.

A dictatorship can use its influence to slow population growth. Although there are many dictators in the world today, I think Iran is the most successful in slowing its growth. That sort of heavy-handed governing wouldn’t work in the USA. Indeed, I believe that people should have the right “…to determine freely and responsibly the number and the spacing of their children.”

As I have mentioned to Richard Grossman before, voluntary noncoercive “family planning” is a nicety but, if things continue as they are, will become useless and meaningless in the not-too-distant future. It is one thing to have an elevated rational discussion of overpopulation in the US and Europe. It is entirely another when it comes to African countries and the middle east, where patriarchy, tradition, religion and women’s disempowerment rule. Also, it has not yet been made clear in international discussions that the adverse consequences of overpopulation will be suffered most by those countries, not the developed world, which, in their scurry to find enough food and water, will (as they are already doing) decimate wilderness and wildlife as well, thus compounding their suffering. My question is this: since we already accept limits and restrictions on many things (pollution, driving too fast, smoking and drinking, corporate dumping, etc.), just why should limits not be placed on reproduction? What is so sacred about “choice”? Why should parents be excluded from their social responsibility to help save the planet? (not to mention save themselves and their communities from starvation). Is this not, at least with regard to Africa, not patronizing? Is it not based on the assumption that Africans cannot be educated to understand why they should have fewer children? Keep in mind that polls show that in most African countries parents WANT more children. Men want seven children, women want six. Only a few countries in Africa have
on the average fewer than that, and Uganda is now attacking people who choose to have
no more than two children! So be realistic. Without mandatory population control, we are doomed to overshoot and those countries with too many people will suffer the most. There are myriad ways, through policy changes, to put pressure on these countries, such as denying foreign aid to countries where free birth control and abortion are banned. Or elsewhere, REDUCE welfare benefits to families with more than two children, and keep reducing them with each additional child.This sounds harsh, so try the reward system. But to keep promoting free choice and voluntary birth control just postpones the inevitable.