“We will all miss John, but I think none more so than the cougars he did so much for.”
— Paul C. Paquet, Carnivore Biologist 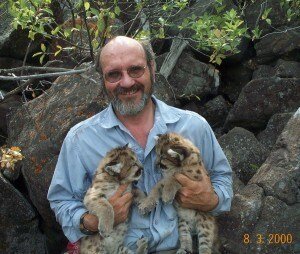 A couple of weeks ago, I ran a search for coyote home-range research papers and opened the first entry. Home-Range Size of Coyotes: A Critical Review. 1984. Lead author, John W. Laundré. I smiled, widely, pleasantly unsurprised. Then I cried. John was dying. Today, he is gone.

John Laundré joined the Eastern Cougar Foundation (ECF) in 2008 after a peripatetic, legendary career out west studying everything from barn cats to Chihuahuan Desert pumas, tallgrass prairie mammals to his foundational Landscape of Fear, predator-prey pas de deux. With his spouse and research colleague, Lucina Hernandez, and their little girl, Cecile, the family landed in Oswego, NY, where Lucina had taken a position at SUNY Oswego developing the biology department’s new field-station. Prior to the conference-call introducing John to ECF in the spring of ’08, former Florida Panther Team Leader and founding ECF director, Dave Maehr noted John’s reputation as an iconoclast. During the call I was struck, moved, by his soft-spoken voice, insightful yet intense, discussing ecosystem integrity and the puma’s role, from the canopy to the understory.

Within a month, Dave was gone, killed in a plane crash tracking black bears. John stepped into Dave’s place, with Jay Tischendorf, as resident puma field-experts, then stepped-up from advisor to Vice President, and the eastern cougar landscape was changed. For 10 years under founders Todd Lester and Chris Bolgiano, ECF reviewed in exhaustive detail from Nova Scotia to Mississippi the absence of breeding cougar field-evidence. It was time to talk recovery. As he did for Yellowstone’s wolves protecting rivers from browsing elk, John would herald puma recovery east of the Rockies as an ecological imperative to restore forests besieged by white-tailed deer. The Eastern Cougar Foundation became the Cougar Rewilding Foundation (CRF).

In 2013, during her second bout with cancer, Lucina succumbed heartbreakingly to her illness. As an adjunct professor who had assisted Lucina through every phase of the field-station’s development, John interviewed to succeed Lucina. He was denied. Oswego knew they had a pair of rock-star predator ecologists on board; at Lucina’s memorial service, the Dean highlighted peer-citations of their studies in the hundreds. John’s unsparing, wildlife-first iconoclasm cut both ways. Despite his towering credentials identifying a generation’s bell-weather ecosystem dynamic, and his 70-some peer-reviewed papers, John wasn’t much tailored for careerist tenure-tracks or cushy seats heading name-brand NGOs. Which isn’t to say rejections didn’t drive him nuts. John wanted those jobs, and the recognition they conferred. He packed up Cecile and lit out for SoCal’s San Jacinto Mountains, where one of John’s camera-traps soon captured the missing image forever haunting the eastern seaboard: a bonafide puma cam-pic.

While Will Stolzenburg was consulting with CRF during the composition of Heart of a Lion — Will’s beautiful, tragic account of the young suitor who dispersed from the Black Hills to Connecticut seeking a mate — we discussed softening the pejorative associations embedded in the “Landscape of Fear”: not exactly a puma-friendly banner for a general audience marinated in click-bait predator mongering. But with the predator-dependent ecosystem model thoroughly established in the scientific literature, we found a disarming corollary. Let’s start calling wolves and pumas what they are: ungulate shepherds, forest guardians. Heart of a Lion’s Chapter 7: The Deer Shepherd. John’s sprawling, draft manuscript outlining wolf and puma recovery in the eastern United States: Guardians of the Forest.

Ever the fierce predator advocate, John’s animus towards the wildlife managing agencies over the years turned from simmer to full boil. Whether it was challenging the cooked numbers of the Black Hills’ puma population to justify an absurd spike in hunting quotas, opposing one Florida development proposal after another eating into critical panther habitat, or critiquing the puma quotas in Utah that were kept high despite shooters falling well short of said quotas for 20 straight hunting seasons, John was there, with his soft voice and big resume, testifying, “No.” And many a time CRF and sister-orgs tried to recruit marquee cougar researchers to oppose the puma slaughter-of-the-season, we heard nothing but crickets. John had a name for the malfeasant agencies and his cowardly lion colleagues ungrateful to the cats who fed them, “F*ckers.” John was the guardian’s guard. When John and Cecile moved to Oregon, John found in Predator Defense‘s Brooks Fahy an NGO and devoted confidante as fearless as John.

And, so devoted, John raised Cecile. The years of after-dinner phone calls we shared ended always with the request to finish CRF business so he could spend time with Lucina and his “Chiquita.” Bereft of her mom at 10, John doubled-down bringing up Cecile, who attended John during his final months with grace and astounding composure.

For me, John’s finest achievement during his decade-long tenure as CRF Vice President was his cat’s eye perspective, Phantoms of the Prairie, The Return of Cougars to the Midwest. After chapters chronicling the partial recovery of pumas to the prairie states, and mapping the habitats and river corridors they traversed, John places the reader behind the eyes of a dispersing, subadult puma cover-cloaking across the grasses and outcrops, riverbreaks and cottonwood stands on the high prairie, hop-scotching for sanctuary in the forests of the Mississippi Basin. Sanctuary of sorts, where, alas, after 25 years of dispersal from the prairie colonies, the Mississippi Basin has yet to reveal a single cougar litter: the region remains a puma pioneer’s graveyard, what John lamented as the place of “dead cats walking.”

When Yellowstone’s restored wolves put fear into elk and up sprouted willows and beaver, birds and butterflies, John Laundré was there first, watching, documenting, and describing, because, when I once asked, “How could you know, beforehand?” he replied, “I felt it.” What is Fear? The Oxford English Dictionary cites Fear’s oldest definition as: reverential awe, as being in the presence of a god. Shape-shifting empathy with coursing wolves, stotting elk, and dispersing pumas is the soul-scape of poets and shamans — whom religion scholar Mircea Eliade called technicians of the sacred — in concourse with the animal daimons, protecting and healing the world.

America’s great, iconoclastic psychologist, James Hillman, wrote that one’s ultimate legacy was to become irreplaceable. John Laundré tended ecology, from the canopy to the understory, as a technician of the sacred, irreplaceably, with reverential awe.

Christopher Spatz is a long-time carnivore advocate, climber, and poet. He served as president of the Cougar Rewilding Foundation (cougarrewilding.org) from 2008-2018, working closely with John Laundré and others. He and John are authors of several papers here in Rewilding Earth (easily found by putting their names in the Search bar of homepage). Listen to John’s Rewilding Earth Podcast on Eastern Cougar Rewilding here. For additional tributes to John, please go to the webpage set up by John’s friend Brooks Fahy of Predator Defense.

Thanks Chris for such an illuminating tribute to the cougar’s greatest champion and its haters’ worst enemy. If only there had been one or two more of John, we cougar rewilders would have closed up shop by now and gone home to celebrate our work well done. But alas, they broke the mold with John.

Hi thanks Will. I met John in 1975 at ISU on his doctoral degree. We became friends. I invited him to join the mountain lion study I started in early-mid 1980’s and promoted him to become the face of the project her the years. He was a good guy, hard worker, and made many contributions. His wife was a very good person too! We miss them both. The world needs more John Landre’s. Best Susan Clark

and can’t belive he has died.

Live on John, live on!

I had interviewed John for my capstone project at the New School in December, we met over Zoom and he was just a lovely guy, and the cougar’s fiercest champion. We must all now fight for these animals doubly hard now that John isn’t here. RIP to a wonderful and important guy.

Chris, I just wanted to thank you for taking the time to do this write up. I also really appreciate your generosity on Cecile’s gofundme. This is truly touching, and I learned some things about John I didn’t even know until today. John is absolutely a person to celebrate, and this helps the rest of us process. Keep up all of the great work that you do.