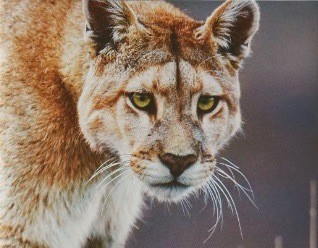 Review of Path of the Puma, by Jim Williams

Path of the Puma: The Remarkable Resilience of the Mountain Lion. Jim Williams, Patagonia Works, 2018.

Inside the covers of Path of the Puma is a map presenting historic range, current known range, confirmed sightings outside of range, and likely path of mountain lion dispersal. Current range includes North America west from the Rockies, north to south from the southern Yukon through Mexico, and a few outliers such as the Florida panther, suggesting that these big cats, extirpated across much of their historic range, are making a comeback. Arrows indicating the likely path of mountain lion dispersal point east from the Rockies all the way to New York. Scattereddots indicate confirmed sightings recorded east of the Mississippi River.

Montana wildlife biologist Jim Williams is an optimistic realist having studied and managed Puma concolor for decades. Emphasize manage here, for Williams is a confirmed believer that wildlife, and especially big carnivores like the puma, will not survive as species in the long run unless we decide we want them to do so. Much of this readable and informative book is testimony that we seem committed to keeping wildlife on the land, as Williams certainly is. He is a firm believer in Aldo Leopold’s dictum that “to keep every cog and wheel is the first precaution of intelligent tinkering,” but knows from long experience that this is a big challenge when it comes to wildlife, and especially to predators.

Humans have a long history of fighting and taming the wild … wolves, bears, and cats; native grasslands; forests; and even wild rivers all over the world. If we ranched worms, we’d declare war on robins. Our nature is to categorize species into “good” or “bad,” based on how they affect us personally. But these animals aren’t good or bad. They’re just wild parts of a wilder system, playing an ecological role that keeps the tapestry from unraveling.

His many years of work as a wildlife biologist for Montana Fish, Wildlife, and Parks yielded a treasure trove of stories of encounters with the big cats, hunters, ranchers – all the stakeholders in issues involving mountain lions.

Path of the Puma is a memoir, a primer in puma ecology, and an accessible introduction to core principles of conservation biology as they pertain to large carnivores. As memoir, the book tells how Williams came to be a wildlife biologist and specialist in mountain lions. It is an account of his expanding understanding of what it takes to enable large carnivores to survive in an age when their habitats are constantly encroached upon by human activities like ranching, housing development, oil and gas production, and the ancient practice of hunting. He explains how he tries to help those who think predators are “bad” animals to understand the wild hunters’ role in and critical importance for natural systems. He shares stories of successes and failures in this work.

Williams enjoyed enough success in his work that he was invited to share his insights with wildlife biologists and conservationists in Chile and Argentina. Path of the Puma’s twenty-one chapters are divided almost evenly between Montana mountain lion stories and Patagonia puma stories. (These cats have many common names but generally are called mountain lion in North America and puma in South America.) “Way down south” as he characterizes the places he worked in Chile and Argentina, people working to conserve wildlife were encountering almost exactly the same problems as in North America but were at a stage in land conservation where opportunities were many if some of the problems could be addressed. For two centuries gauchos had killed pumas at every opportunity to protect sheep in the vast ranches of Patagonia. Williams was invited way down south because the economics of sheep ranching were opening possibilities for conservation, and national parks and reserves were being established and considered in the region. One challenge was to convince the ranchers and gauchos that pumas should be protected.

The stakes are tremendously high when it comes to establishing some small amount of predator tolerance among Patagonia’s ranchers. Their spreads are mind-boggling huge, sprawling cross millions of acres. So if you can convince just one single ranger to protect guanaco herds, or to tolerate wild pumas, you have made a landscape-level effect on a place bigger than Yosemite National Park.

Chile and Argentina do not have extensive of public lands as we do in the American West, so convincing private ranchers to participate in conservation efforts is essential. 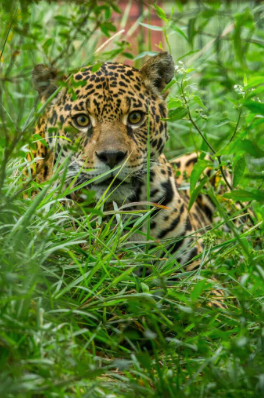 Williams spent time in Patagonia and has published this book in part because private conservation initiatives were under way then, and still are, to establish national parks and reserves in the area. The most important private players in this effort were Doug and Kris Tompkins, American philanthropists with a vision for protecting Patagonia landscapes in the interest of wildlife like the puma and the people of the land there. Doug (now deceased) and Kris Tompkins have been bent on rewilding parts of Patagonia, and decades of effort have led to creation of now famous national parks there.

From a biological perspective, most of Patagonia is no longer wild. But it is getting wilder. And here, just as in North America, big cats are expanding their range and finding their way into old haunts. The pumas of Patagonia have survived the destruction of the frontier years, the predator purges, and the unraveling of ecosystems. And they are spreading out, slowly but surely, from their scattered mountain strongholds into their former homeland.

Williams’s stories of rewilding successes and aspirations in this region are inspiring.

Anyone familiar with the outdoor company Patagonia knows of the exceptional graphics and photographs in their catalogues. The company’s venture into publishing is of similar high graphic and photographic quality. The photos in this book are simply stunning, mostly of pumas but also of scenery and other wildlife. The photos beautifully complement the text. Path of the Puma is a pleasure to read. Williams writes in a folksy style and is a great storyteller who has many tales to tell and a thorough knowledge of his field. He weaves personal anecdotes skillfully with science, wildlife management, and the politics of conservation. The book is an accessible, informative, and enjoyable look into the work of conservation biologists and rewilders. It provides a good example of what rewilders must do to communicate with the public about what is at stake and what is to be gained from rewilding and allowing wild beings like pumas to flourish.

Williams should have the last word here:

This new lens into the lives of cats offers tremendous opportunity – if we know how Puma concolor lives, and what the cats need, then we are in far better position to protect the species. But the window into their lives also comes with tremendous risk – if a primary reason this predator thrives among us is because it remains so invisible, then what happens when it’s not? That, I suppose, is up to us. Living with wild nature is a choice.