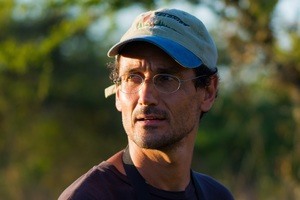 Ignacio Jiménez (1969, Spain) has extensive international experience in conservation. He has coordinated research and management projects with manatees in Costa Rica and Nicaragua and with golden-crowned sifakas in Madagascar, worked on wetlands and protected areas in El Salvador, and coordinated and published a national assessment of the Spanish experience in endangered species recovery. He has a degree in Animal Biology from the Universidad de Valencia in Spain, and a Masters in Wildlife Management and Conservation from the Universidad Nacional in Costa Rica. He worked for CLT/Tompkins Conservation in Argentina between 2005 and 2018, where he coordinated the largest reintroduction program in the Americas. This initiative included restoring populations of giant anteater, pampas deer, tapir, peccary, green-winged macaw, maned wolf and jaguar. He spent 2016 in South Africa in order to learn about how public and private organizations in Africa manage and integrate nature reserves, rewilding and ecotourism. In 2018 Ignacio started collaborating with Brazilian organizations to establish two large conservation landscapes in the Atlantic Forest and Pantanal. He returned to Spain in that year and he is presently coordinating a project aimed to establish new or expanded protected areas in that country. He works for Fundación Global Nature, is member board of Rewilding Spain and the IUCN Conservation Translocation Group, and is also a National Geographic Explorer.

His main theme of interest is institutional ecology: learning how to design institutions and organizations to improve social and biodiversity outcomes. His research and conservation efforts have been featured in scientific journals, books and other publications. Ignacio is the main author of a practical manual for the management of conservation programs published in Spanish and Portuguese and soon to be published in English by Island Press. He has coordinated dozens of training courses in six countries, acted as key speaker in international meetings and has written and directed more than 10 videos about conservation. Presently, Ignacio lives with his family near a nature park in the Spanish coast.

The Three Kingdoms vs Empty Spain