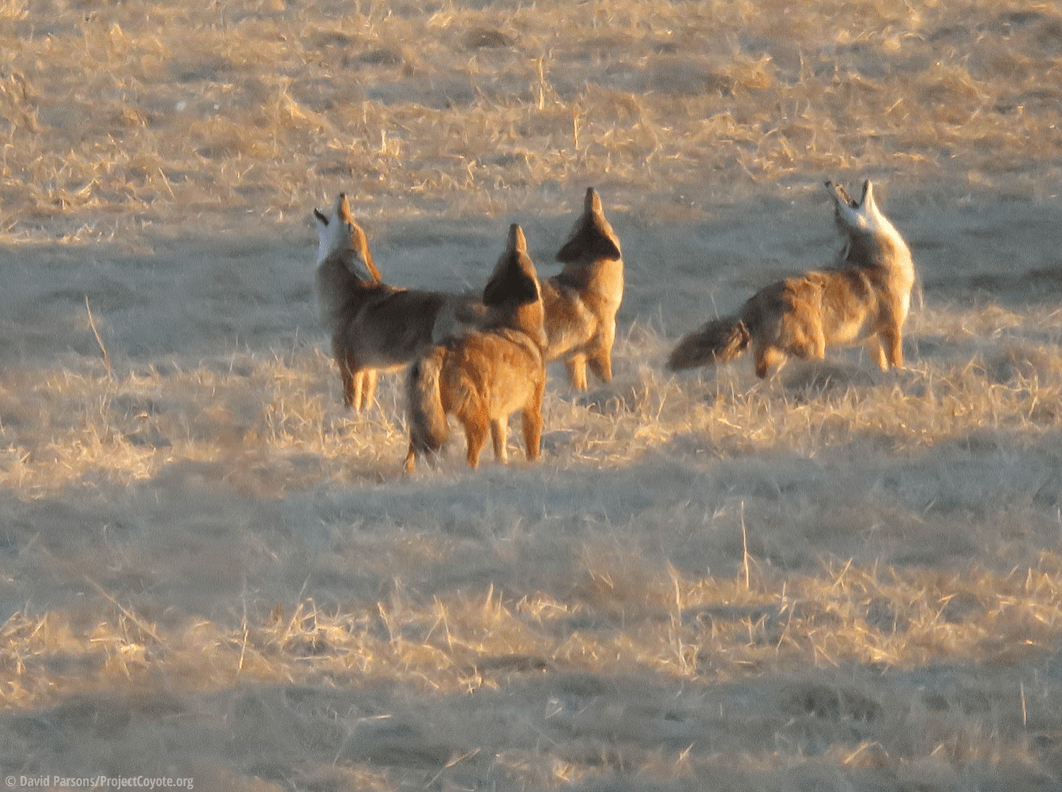 Howling coyotes © Dave Parsons. Relating to #9 in this list below.

Editors’ note:  Fortunately, rewilding projects and ideas are in the news more and more frequently.  Unfortunately, this is largely because the extinction and climate crises have worsened to the point that truly bold and visionary conservation and restoration work are essential to saving life on Earth.  In this periodic summary, we list some of the notable stories in the media pertaining to protecting and restoring wild Nature that the TRI board and staff discover and discuss.  These are some highlights from Sept.-Oct. 2022. We urge sharing links to the ones you find most inspiring.

“On August 24th the state of Utah filed a court challenge to the Biden Administration’s restoration and expansion of the Bears Ears and Grand Staircase Escalante National Monuments. It’s important to recognize that this is typical of nearly every instance of new land protection proposals. I am copying an article I wrote in Sierra Magazine which provides a brief look at local reaction and opposition to many parks that are now part of each state’s identity.”

“As head of the U.S. Fish and Wildlife Service, Williams is reviewing whether the hunting rules she helped foster adequately protect wolves.”

“Abstract: Livestock husbandry exerts major pressures on wildlife across the world. Large carnivores are particularly at risk because they are often killed by pastoralists as a preventive or precautionary response to livestock depredation. Minimizing the overlap between pastures and carnivore habitat can thus be a conservation strategy, but it remains often unclear which pastures should be targeted to maximize conservation benefits given a limited budget. We addressed this question for the last viable population of the Asiatic cheetah (Acinonyx jubatus venaticus) in northeastern Iran. By combining species distribution modeling with a spatial prioritization framework, we aimed to identify where grazing right buyouts should take place to reduce cheetah killing by herders and their dogs. We assessed the Asiatic cheetah habitat using species distribution models, highlighting large, contiguous areas that overlap with livestock pastures (5792 km2, equaling 72% of the total predicted suitable habitat). Subsequently, we used data on the number and distribution of livestock (47,000 animals in 80 pastures) and applied a spatial prioritization method to identify pastures for grazing right buyouts for a range of budget scenarios (US $100,000–600,000). Pastures selected had a high level of irreplaceability and were generally stable across budget scenarios. Our results provide a novel approach to minimize encounter rates between cheetah and livestock, and thus the mortality risk, for one of the world’s most endangered felids and highlight the potential of spatial prioritization as a tool to devise urgent conservation actions.”

4. NPR, Wolves and beavers may be the key to restoring ecosystems in the American West [Oct. 3, 2022]

“Scientists have a plan to help restore wildlife habitat in the American West by moving grazing livestock off public lands and reintroducing two controversial species: wolves and beavers.”

This op-ed explains why wolf hunting is not a question for science but for ethics, by acknowledging who wolves are and by questioning our self-assumed right to decide over their lives. Written by The Rewilding Institute and Project Coyote staff members Francisco Santiago-Avila and Renee Seacor, and Project Coyote’s Michelle Lute.

“Cougars (Puma concolor) have been recolonizing Midwestern North America during the past 3 decades with>950 cougar confirmations east of established populations. Due to an increase in confirmations east of current breeding populations, evaluation of cougar habitat suitability and connectivity is needed. However, few studies have assessed the habitat potential for cougar recolonization in the eastern portion of their former range. This study, published by Landscape Ecology, uses various habitat quality thresholds to model potential cougar habitats and dispersal corridors throughout eastern North America.” Read the report

7. The Guardian, The end of a way of life? Ranchers struggle to survive the south-west’s megadrought [Oct. 2, 2022]

“This is a good piece about all the subsidies and the lengths we will go in this country to maintain an archaic industry that is incredibly destructive. Living in denial about climate warming and change—supporting ranching until the “end” of the drought?  But as the article concludes “ranching is a way of life” which the rest of us must support through numerous subsidies and destruction of our public lands.” —George Wuerthner

“Large numbers of people tune out as soon as they hear the words ‘climate change,’ so if powerful organizations want to convince everyone of the need to preserve biodiversity, using climate change as the cudgel is not a winning strategy. ‘Climate change’ or “climate” is used more than 90 times in the 115-page report, while ‘population’ in the context of too many people is barely mentioned – called only an ‘indirect driver’ of biodiversity loss – and ‘overpopulation’ isn’t mentioned.

“I’m a Wildlife Biologist. It makes my day to see coyotes on my morning walks and bike rides in the North Valley. And it’s always a special treat to hear their chorus howls in the evening from our back porch on Decker Avenue near the Candelaria Nature Preserve. Not everyone views our urban coyotes in the same way I do, though. This is often due to the myths and assumptions humans make about coyotes, their behaviors, and intentions.”