Rewilding in the Media #9 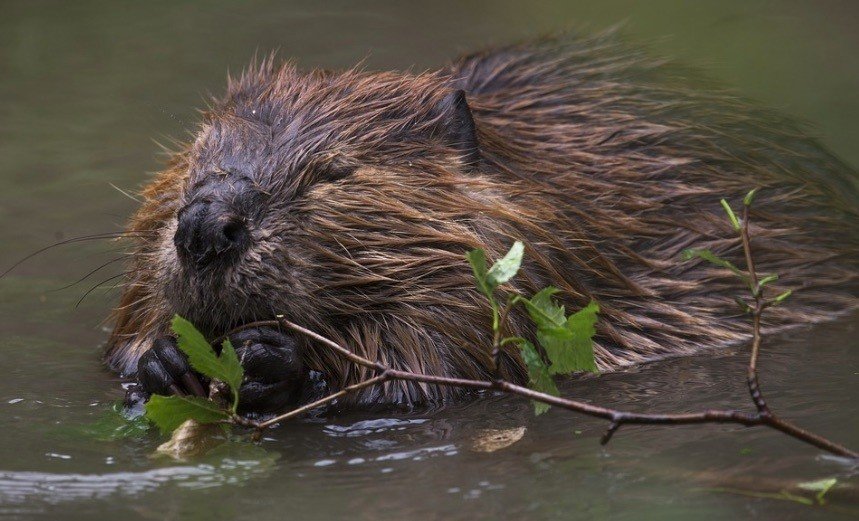 Editors’ note:  Fortunately, rewilding projects and ideas are in the news more and more frequently.  Unfortunately, this is largely because the extinction and climate crises have worsened to the point that truly bold and visionary conservation and restoration work are essential to saving life on Earth. In this periodic summary, we list some of the notable stories in the media pertaining to protecting and restoring wild Nature that the TRI board and staff discover and discuss.  These are some highlights from January 2022. We urge sharing links to the ones you find most inspiring.  This list was curated by Katie Shepard, Rewilding Earth Managing Editor.

“The United Nations, conservation organizations such as The Nature Conservancy, and numerous climate and biological scientists are calling for a high level of protection of 30% of the Earth by 2030, including vast expanses of forest. We submitted two bills to the Massachusetts Legislature that would move us toward that goal. H.912 requests that the century-old laws that dictate policies on our state land, including forest management for various purposes, be updated to reflect the 21st century realities of climate change and the biodiversity collapse. H.912 would set aside a modest 8% of our state land base as wild lands and is something that we can readily do, with little or no harm to anyone, and it would not cost anything. H.1002 requests that 30% of the commonwealth’s wildlife management areas be set aside as wild lands by 2030. This would amount to a very modest 1 % of the state’s land base.”

“The value of old complex and wild forests is something we don’t hear about enough. I know that forest landowners often feel that if they are not doing some kind of management of their land, that they are being neglectful. Of course people can cut timber, and there are better and worse ways of doing that. But what about someone who wants to simply leave their forest alone to be “managed” by nature? Should that not be seen as truly beneficial for our towns and our commonwealth?”

Bob Leverett, “the East’s preeminent old-growth sleuth”, as John Davis dubbed him long ago, has long been a champion for old-growth forest and has written many times for Wild Earth and Rewilding Earth.  This article also credits Mary Byrd Davis, another Wild Earth writer and editor of Eastern Old-Growth Forests: Prospects for Recovery and Rediscovery. Listen to the Rewilding Earth Podcast with Bob here.

“The global conservation community and life on earth suffered a monumental loss in the closing days of 2021 with the deaths of two conservation giants – Professor Edward O. Wilson and Professor Thomas E. Lovejoy III.”

“Many thanks for sharing your beautiful words for two towering figures in conservation science, Paul.” – John Davis, TRI Executive Director

This article critically examines the effectiveness of EIAs (environmental impact assessments) in protecting nature and humankind from major developments. This EIA paper is part of a special journal issue honoring the leading ecologist, Bill Lidicker.  The special issue has a number of important papers that you can freely access here.

5. Here is a recent example (Jan. 7, 2022) demonstrating how unreliable science is being used by western state wildlife agencies to justify status quo management of bobcats. The study was carried out by Sean Murphy, Susan Eriksen-Meier, Lisa Robertson, and Mark Elbroch from the University of Kentucky, Wyoming Untrapped, and Panthera.

From the Press Release: Panthera Puma Program Director, Dr. Mark Elbroch, stated, “This push to estimate bobcats quickly and poorly is worrying because it appears to be a means of justifying status quo management and current bobcat exploitation. We would rather see wildlife agencies develop new strategies based on the inclusion of diverse perspectives, including those people who value carnivores as necessary components of healthy ecosystems.”

“For the last 25 years, Balken’s nonprofit, the Glen Canyon Institute, has been one of the loudest advocates for America’s ‘lost national park.’ It calls for restoring the canyon by lowering Lake Powell and for a broader rethinking of the values assigned to this stretch of desert.”

“Today, New Mexico Departments of Transportation and Game and Fish released a draft of their Wildlife Corridors Action Plan. Stemming from the Wildlife Corridors Act of 2019, the 700-page report identifies 11 priority safe passage projects such as underpasses and overpasses throughout the state that will improve driver safety and increase habitat connectivity for the state’s native wildlife including elk, deer, pronghorn and bighorn sheep.”

“Plant-based diets could provide wealthy countries with what researchers are calling a ‘double climate dividend.’ A dietary shift from animal-based to plant-based foods could reduce greenhouse gas emissions by a staggering 61%, as well as increase carbon sequestration dramatically, according to a new study in Nature Food.”

“The most significant and damaging rollback of bird protections in our history is finally, officially, gone. This month, the Biden administration’s repeal of the Migratory Bird Treaty Act (MBTA) rollback went into effect, and critical bird protections returned for the first time in nearly four years. At the same time, a crucial agency process took a key step forward that could provide stronger and improved MBTA rules to conserve declining bird populations and keep our common birds common.”

“A slaughter of wolves is underway in Montana, Idaho and Wyoming that has no precedent in the past 100 years. […] Lawmakers in those states have resumed their longstanding war on gray wolves now that the federal government no longer protects them as threatened with extinction in the region. In all three states, even wolf pups can be killed. […] the U.S. Fish and Wildlife Service announced in September that it would begin a 12-month review to determine whether ‘potential increases in human-caused mortality may pose a threat’ to the wolves […] We shouldn’t wait for this review to be completed to return these animals to federal protection. […] The only way to stop this killing is to restore federal protection to the gray wolf of the Northern Rockies through the Endangered Species Act, which can be done overnight on an emergency basis.”

“Bangladesh’s population of one of the world’s largest tortoise species received a boost last month when researchers and villagers released 10 captive-bred juveniles into the evergreen forests of the Chattogram Hill Tracts. This initiative, in the rugged mountain range in the extreme southeast of the country bordering Myanmar and India, was the first rewilding of the Asian giant tortoise in the country.”

“In Washington State, the Olympic Cougar Project—a partnership between a coalition of Native American tribes and the Washington State Department of Transportation—is studying the movements of cougars as they wander through parts of the Olympic Peninsula. Information gathered by the group could lead to the placement of wildlife crossings over Interstate 5—bridges built for wandering animals, intended to improve the overall health of the ecosystem.”

“Businesses near Yellowstone have organized the Wild Livelihoods Business Coalition to promote management practices allowing for coexistence with wildlife.”

“Nice to see businesses joining in on this.” –Dave Foreman, TRI founder

“An old meteorological station, built by Soviet scientists in 1934, sits in ruin on Kolyuchin Island in the Chukchi Sea, about 6 miles off the coast of mainland Russia. Surrounded by sea ice about nine months a year and abandoned by people 30 years ago, it looks like a tundral ghost town. It does have spectral white inhabitants — but not ghosts. A recent photoshoot by photographer Dmitry Kokh shows polar bears rooming in the abandoned buildings, sunning on the tundra, and lumbering about through abandoned refuse.”

“These photos are a hoot!” –Dave Foreman, TRI founder

“On public lands and energy issues, the Biden administration’s first year has been a significant one, launching an unprecedented vision for land protection and addressing climate change, while also taking several inexplicable steps backwards on oil and gas drilling.”

“I feel somewhat better about Biden’s first year now. With so much work to do and expectations so high it’s too easy to get discouraged.  Thanks for the wake up call.” – Jason Kahn, TRI Vice President

[…] “the Ambler Road — a 211-mile industrial corridor proposed by multinational companies to cut along the Brooks Range, through the Gates of the Arctic National Park, BLM and state land, as well as the backyards of Alaska Native villagers — would change this land forever. The road would bridge 3,000 streams, 11 major rivers, 1,700 acres of wetlands, cross a major caribou migration corridor and transform one of Alaska’s — and the world’s — last wild spaces into a string of the world’s largest copper and zinc mines.”

“A longstanding source of local pride and affection, Welsh mountain ponies have seen many of their traditional roles vanish. A new initiative aims to ensure their continued survival.” Some conservationists see wild ponies as surrogates for native horses that were driven to extinction by early human hunters.

“French astronaut Thomas Pesquet spent six months aboard the International Space Station last year, and his view of the Earth was as alarming as it was breathtaking. […] He says that since his previous visit to space, in 2016, the consequences of human activity have become even more apparent, with glaciers visibly retreating, and a rise in extreme weather events. Environmental concern motivated him to become a UN Food and Agricultural Organization (FAO) Goodwill Ambassador. As an astronaut on board the ISS he supported the FAO’s research into agricultural innovation and methods of food production. Limited resources in space provide an opportunity to model human behavior on a planet with dwindling resources, and Pesquet wants to highlight the parallels between life on a spacecraft and life on Earth.”

“The nation’s top financial regulators will soon embark on a controversial, first-of-its-kind mission: forcing banks and other industry players to prepare for potential threats to the U.S. financial system from climate change.”

22. US Dept. of the Interior, Biden-Harris Administration Invites Public Comment on Development of New Conservation and Stewardship Tool [Jan. 3, 2022]

“The Department of the Interior today, in coordination with the Departments of Agriculture and Commerce and the Council on Environmental Quality, invited public comment and announced listening sessions regarding the development of the American Conservation and Stewardship Atlas (Atlas), a new tool that will be used to reflect baseline information on the lands and waters that are conserved or restored.”

“The leases, reinstated during the Trump years, would have allowed a Chilean mining conglomerate to dig for copper and nickel near the Boundary Waters wilderness in Minnesota.”

“On today’s NPR On Point, Meghna Chakrabarti talked about indigenous communities protecting the gray wolves. Tom Rodgers was a guest and he spoke about the sacred need to protect their brother and sister — the wolf—  and the culture of death that exists in the Great Lakes Region/Northern Rockies Regions and at the US Fish and Wildlife Service.”

“Today’s ‘On Point’ show on wolves was interesting. Most of the focus was on the Native American perspective with some powerful words from Tom Rogers, Acting Director of the Global Indigenous Council. The show content might provide a push for Secretary Haaland to issue the emergency relisting that most conservation groups are calling for. Rogers has issued a plea to expand the reach of the show.” –Dave Foreman, TRI founder

“A thawing of permafrost in beaver-built wetlands can release vast stores of greenhouse gases to warm the climate, but Native peoples are already feeling the rodent’s impacts.” Beavers are native in Alaska, but their range is expanding northward as climate warms.