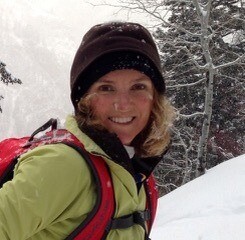 Allison Jones. Allison Jones received her B.A in Environmental Studies at the University of California at Santa Cruz under the guidance of her mentor and advisor, Michael Soule. She then completed her M.S in Conservation Biology at the University of Nevada, Reno in 1996. Her Masters study analyzed the effects of cattle grazing on small mammal communities in the Great Basin. Allison then went on to work as an endangered species specialist for ecological consulting firms in Denver, and then her new home in Utah, where she completed habitat analyses and surveys for endangered riparian plants, birds and mammals, as well as wetland delineations. [Continued below...]

Allison then went to work as the staff conservation biologist for the Wild Utah Project in late 1999, where she provided to conservation partners ecological analyses ranging from literature reviews, to status reviews of rare species, to analyses of various federal land management plan revisions and other actions. Allison has also worked with other scientists to develop new ecosystem function assessment tools, such as the Rapid Stream-Riparian Assessment (RSRA) protocol. In 2014 Allison ascended to Executive Director of Wild Utah Project, where she balanced leading the organization with the program work above, until she moved on from Wild Utah Project in January of 2020.

Allison has been appointed by Utah Division of Wildlife Resources Directors to sit on the state's Black Bear Working Group, which re-wrote the 2000 Utah Black Bear Management Plan and the Wolf Working Group. This Group in turn wrote Utah's first Wolf Conservation and Management Plan in 2005. Allison was also appointed by the Governor in 2013 to sit on the state's Sage-grouse Plan Implementation Council.

Allison currently serves as principal of Allison L Jones, LLC, where she specializes in large landscape scale conservation analyses, and analyses of state and federal wildlife and habitat management plans and revisions (such as NEPA comments relating to BLM or Forest plan revisions, for example). She brings expertise on both the ecology/biology and policy side of these analyses. Allison works on a contract basis to University researchers, independent scientists, government agencies, and conservation NGOs.