A new flock of rheas is now roaming the Patagonian steppe after the 6th rhea release from the Darwin’s rhea Breeding Center. When the program started in 2014, less than 20 birds remained in the wild. Now, the population has tripled. As herbivores and seed dispersers, rheas help the grasslands, damaged by a century of intensive ranching, to recover. The aim is to reach a wild population of 100 adult rheas in Patagonia National Park and restore the species’ essential role in the ecosystem. Watch this video of the rewilding process made by Reuters. 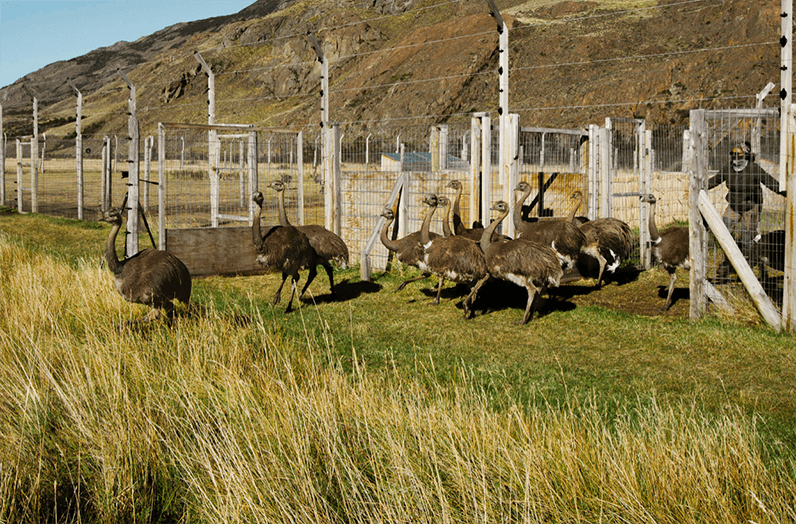 Rewilding the Darwin’s Rhea is possible thanks to collaborations with Chile’s border police, the National Park Agency (CONAF), and the Wildlife and Livestock Service (SAG).

El Amarillo, the Rebirth of a Town

Improving the quality of life, generating local pride, and stimulating small-scale tourism were the objectives of the community renewal and beautification project promoted by Tompkins Conservation Chile, and the community of El Amarillo, a town located near the southern entrance to Pumalín Douglas Tompkins National Park in Chilean Patagonia.

With hopes to inspire other communities to carry out similar projects, Tompkins Conservation Chile has launched a digital book presenting the history of this collaborative program, which focused on the restoration of the traditional architecture of El Amarillo, extensive landscaping, signage by local artisans, and attractive architectural details like “chirimbolos” (decorative moldings).

You can find the e-book at @tompkinsconservationchile. 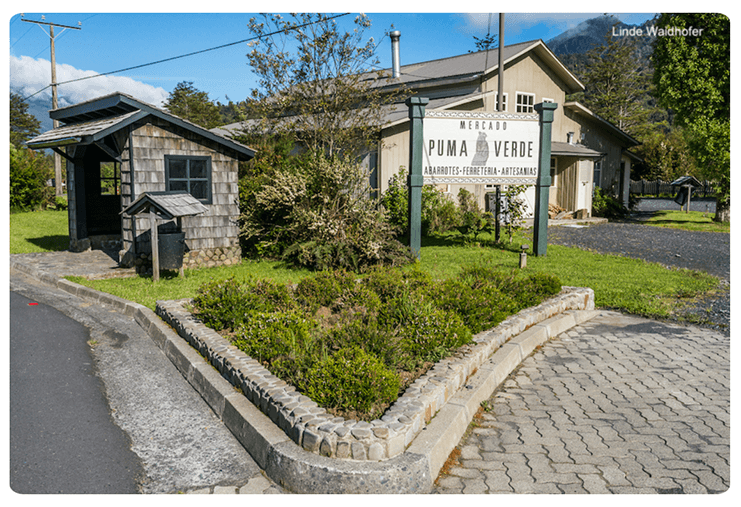 TC Chile, together with the communities surrounding the Pumalin Douglas Tompkins National Park, a legal complaint was filed against the use of the chemical glyphosate on the Carretera Austral, the major road which runs through the national park. The World Health Organization classified glyphosate as a probable human carcinogen, and it has been banned in several countries. This action seeks to prevent the use of this product, which threatens both the ecosystems and local communities. 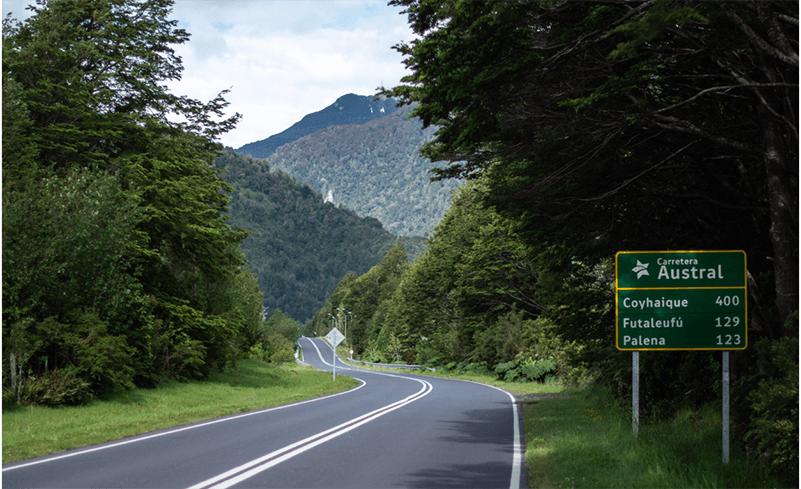 Glyphosate may come into contact with non-target organisms affecting wildlife species living in the environment.

After many years of work in the giant river otter reintroduction project, Alondra and Coco have had three beautiful pups (video here)! These are the first giant river otters to be born in Argentina after many decades of extinction. The pups were born on May 19th at 1 am. The first week of life is critical for them, and they are doing well. The first weeks are a fragile time and their survival is still uncertain, but their progress gives us hope. We expect to see them swimming in the pre-release pen soon. 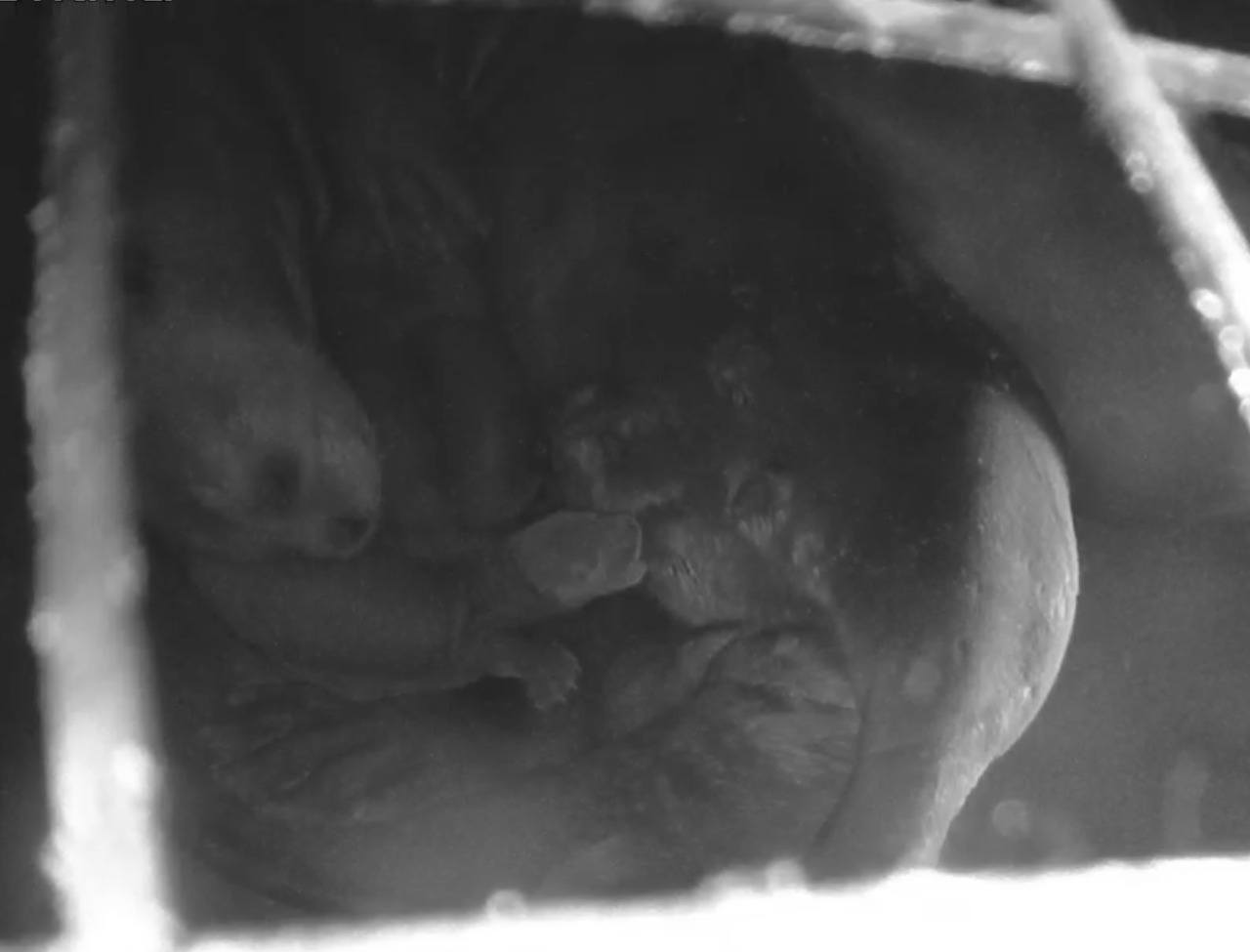 A surveillance camera in the giant otter den shows Alondra breastfeeding the pups.

Sebastian Di Martino, the director of conservation for Rewilding Argentina, was kayaking in El Impenetrable National Park when he suddenly movement and heard a sound that was familiar to him from Iberá. Then a playful giant otter, extinct in all of Argentina, appeared. You can read The Guardian article here.

His legs were trembling in excitement but he still managed to make this video. This is the first sighting of this globally endangered species since the 1980s in the country, and the first one in 100 years in the El Impenetrable area! We are working hard with local organizations to reduce poaching threats in El Bermejo River to prevent this individual from an untimely end and to help it form a family unit. Challenging times are ahead!

A group of 9 peccaries were taken to a pre-release pen in Carambola, while three additional peccaries were released in Yerbalito. This seed disperser plays a very important ecological role in the wetlands. 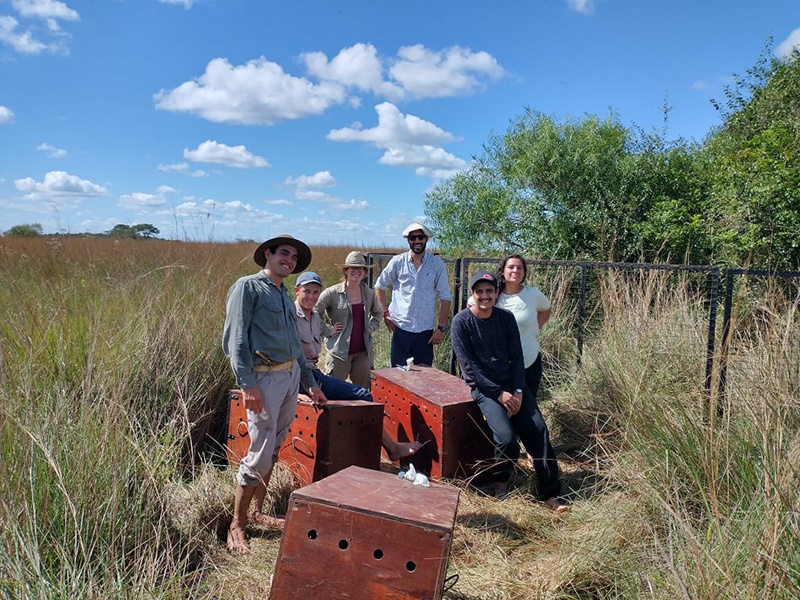 The smiling team after releasing the peccaries in the pre-release enclosure in Carambola.

Red and green macaws join the celebration (told by Mane, coordinator of the macaw project)

Every May 1st for the past three years we have been invited to a lunch celebration for International Workers’ Day with a local family. The Rodríguez family call us “The Macawers” because our visits coincide with monitoring the macaws. Their farm is close to the National Park where the host is always Doña Antonia, an 85-year-old woman who was born and raised here. After lunch, we danced to guitar and accordion music played by musicians. Amidst the excitement, green and red macaws appeared. They also wanted to be present on this traditional day. They have come back to stay! 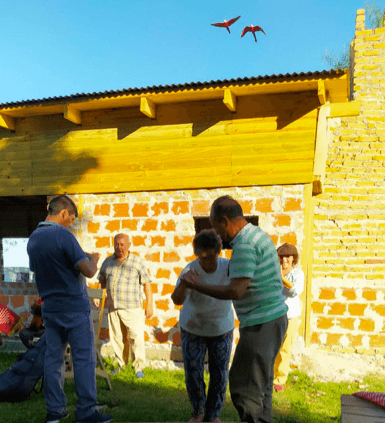 The picture was taken at the precise moment in which two macaws flew over the celebration.

By supporting traditional artisan skills, we are helping local communities rescue their cultural roots while gaining economic opportunities. Near El Impenetrable National Park, the first ceramic training courses were held for the entire La Armonía community. Led by sculptor and environmental activist Desirée Derider and talented local resident Alejandro Sosa. The whole group built a clay oven and created a large number of ceramic pieces. More than 50 local people participated and there was a lot of enthusiasm and desire to learn.

Meanwhile, in the Entrepreneurs by Nature program, artisans continue to work with discarded wood found in the forest to create crafts, and we met with the weavers to discuss and share knowledge in warping techniques, knitting and natural colors. 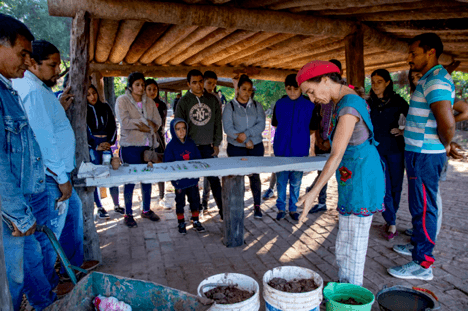 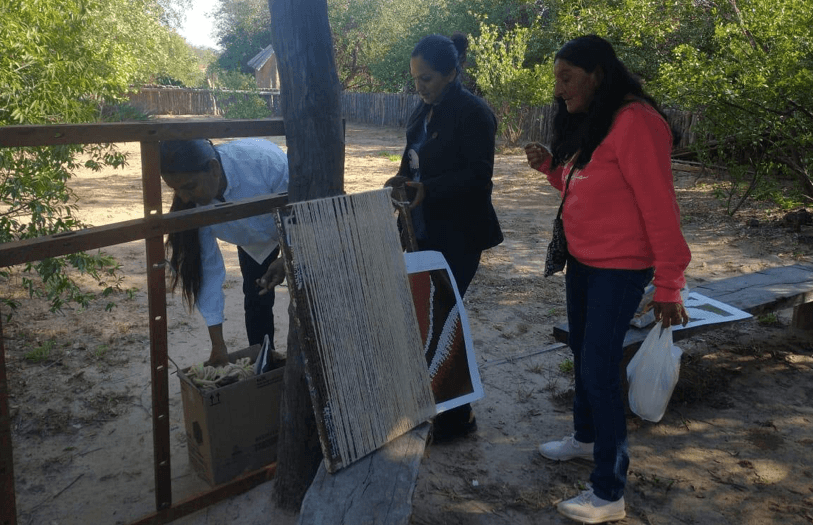 In the nascent project of Patagonia Azul, along the Patagonian coast, we are engaging in environmental education and improving local food sources. Two groups of children between 12 and 14 years old visited the El Sauce property where they learned about the importance of complete ecosystems and rewilding, how to collect data in the field, and played games in the canyon.

We also completed the first harvest of local fresh and organic vegetables. This project seeks to increase the food resilience of Camarones town by producing local and healthy food. 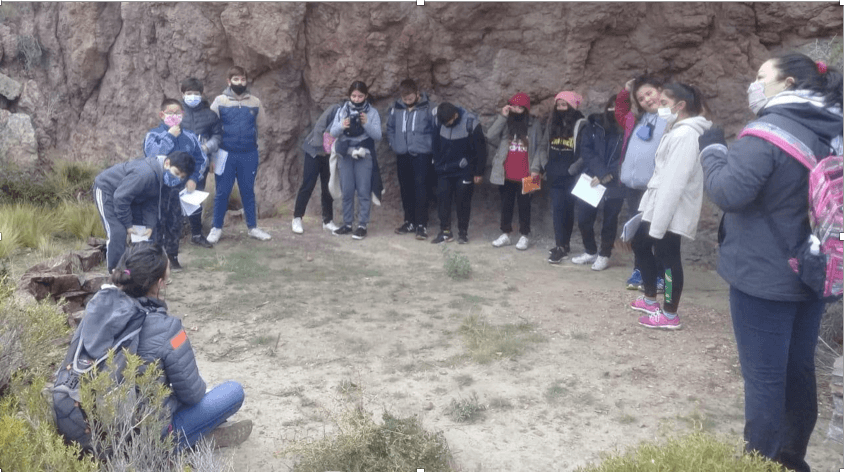 Local kids from Camarones learning about the importance of complete ecosystems 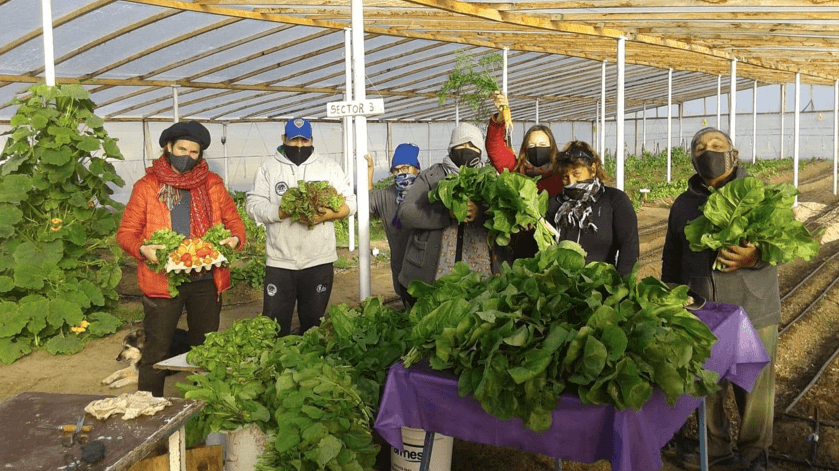 The proud team shows their fresh produce to the camera

Together with the National Parks Administration and other local partners, four huemul deer were collared with VHF and GPS collars. The valuable information gathered from their collars will be used to inform which conservation measures should be taken in Argentina to protect and restore this threatened species, whose low number of sightings has led them to the nickname, “The ghosts of Patagonia.” 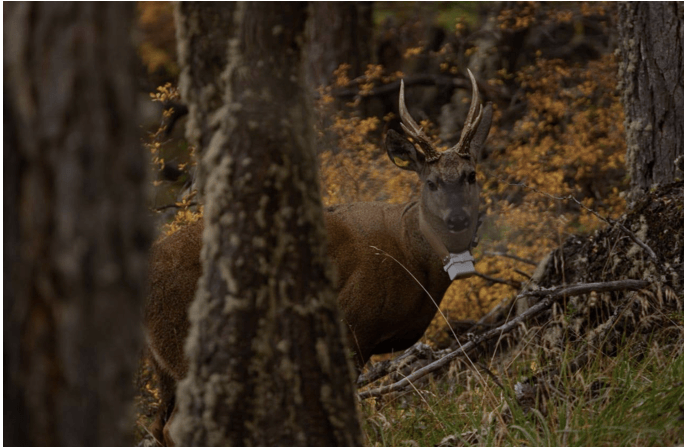 A male huemul deer after being collared

All photos courtesy of Tompkins Conservation.