A glance at the Trump v Biden county by county voting map underscores another major paradox facing rewilding advocates and the wild creatures they would serve:  People in rural areas, where most wild animals would prefer to be, by and large, voted for an administration ideologically opposed to Nature conservation.  Urban areas are where the candidate who believes in science and conservation won, but these areas have much less viable wildlife habitat.  This stark rural conservative v urban liberal divide is perhaps less pronounced, the dichotomy not so dramatic, in other countries; but the paradox is widespread: where the wild things remain, the human inhabitants may vote against them — often unknowingly.

Conservation has historically been a non-partisan issue, but acrimonious politics of late have cost conservationists most of our support in the Republican Party. This support we must work hard to win back.

In the long term, successfully rewilding North America, especially, and other continents to varying degrees, will depend on regaining support for wildlife and wilderness from rural people who have come to distrust anything smacking of “big government” or outsider influence.  In the near term, there may be opportunities for rewilding even in that vast sea of red one sees on US voting maps, for many of those red counties have declining population densities, cheap land, and stagnant economies. Many of those counties are in the Great Plains: the prairie, the heartland, a once and future sea of grass.

So, working with BeWildReWild, Project Coyote, and local partners across the Great Plains and the even larger Mississippi River watershed, The Rewilding Institute has begun mapping opportunities for rewilding — places where we might help Nature heal.  Ground Zero of the tragic de-wilding of the Great Plains is Iowa, as Midwest rewilding visionary Ross Gipple has explained; and there, sophisticated rewilding mapping has already been done (see bewildrewild.org).  We will draw from that Big River Connectivity work and add to it, with special emphasis on several core rural areas: the Loess Hills along the Missouri River in Iowa, Missouri, and Kansas; the Shortgrass Prairie of the Upper Missouri, Upper Platte, and Upper Arkansas River watersheds; the Ozark Plateau of Missouri, Arkansas, and Oklahoma; and the Driftless Plateau of southwest Wisconsin and northeast Iowa. 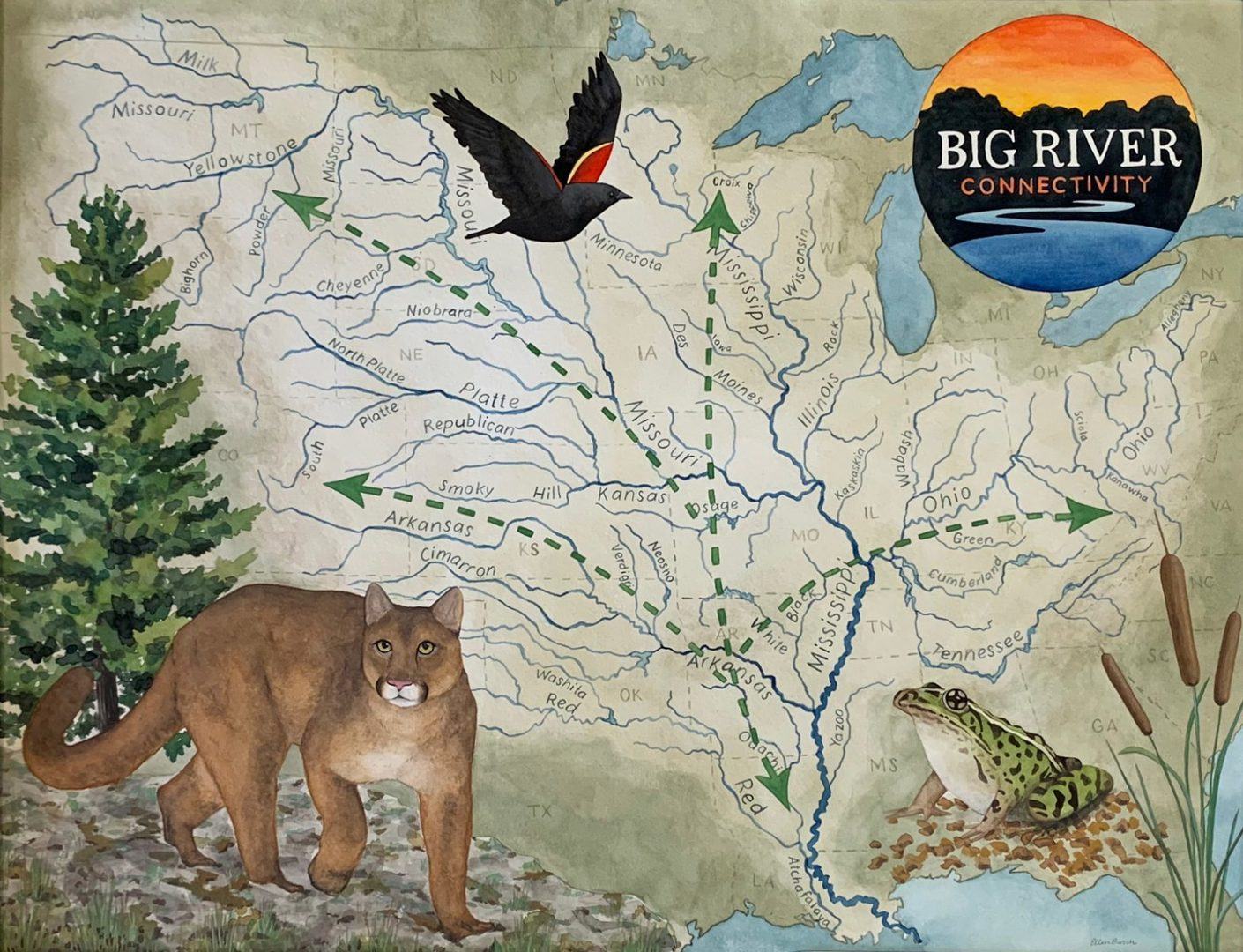 We will link our work in these areas also to the visionary “Half East” wildways map of Wildlands Network (wildlandsnetwork.org) and to the emerging Superior Bio-Conservancy (listen to our podcast with its co-founders Don Waller and Bob Bouchard).  We will also tie it in with wildlands network designs done years ago by some of our and Wildlands Network’s early leaders, for the New Mexico Highlands, Sky Islands, Greater Grand Canyon Region, Southern Rockies, and Heart of the West. Part of the need with rewilding maps, in short, is a great synthesis of what has already been drawn but is not yet available in one comprehensive place.  This wildways work draws heavily from Dave Foreman’s landmark book Rewilding North America and can serve as a blueprint for implementing 30×30 and Half Earth goals.

To the strong suite of existing conservation maps (most comprehensive of which may be The Nature Conservancy’s Resilient and Connected series), we will add some layers with special relevance to those wanting to encourage wildlife recovery:

Mapping is only the first series of steps, of course, but to know where we want to go, a good map is essential.  Achieving high standards in areas to be protected as parts of 30×30 and Half Earth is equally important; quality of protection is as important as quantity of protection.  The ecological ideal, of course, would be to protect at least half of each country in reserves with Wilderness and National Park levels of protection and to give lesser levels of protection to much of the rest. That probably won’t be possible until we relax our human population and resource consumption to much more modest levels.

Meanwhile, though, we should be able to keep free or liberate from exploitation and development at least half of North American lands and waters.  As I noted in my winter Ramble, the quickest ways to afford full protection to all public wildlands is to give private wildland owners strong incentives for conserving their properties and coexisting with wildlife, including through payment for ecosystem benefits and carbon storage.

Please help us figure out how to work with landowners, Native tribes, wildlife officials, and all who care about Nature to rewild the most altered biome. Grasslands presently are dominated by agriculture, but they have the potential to be restored to prairie teeming with Bison, Elk, Wolf, prairie dogs, grassland sparrows, prairie chickens, and butterflies, and rivers could be coursing with American Eel, sturgeon, River Otter, Mink, Beaver, frogs, turtles, and perhaps most winsomely — damselflies!

What about ocelots in South Texas?